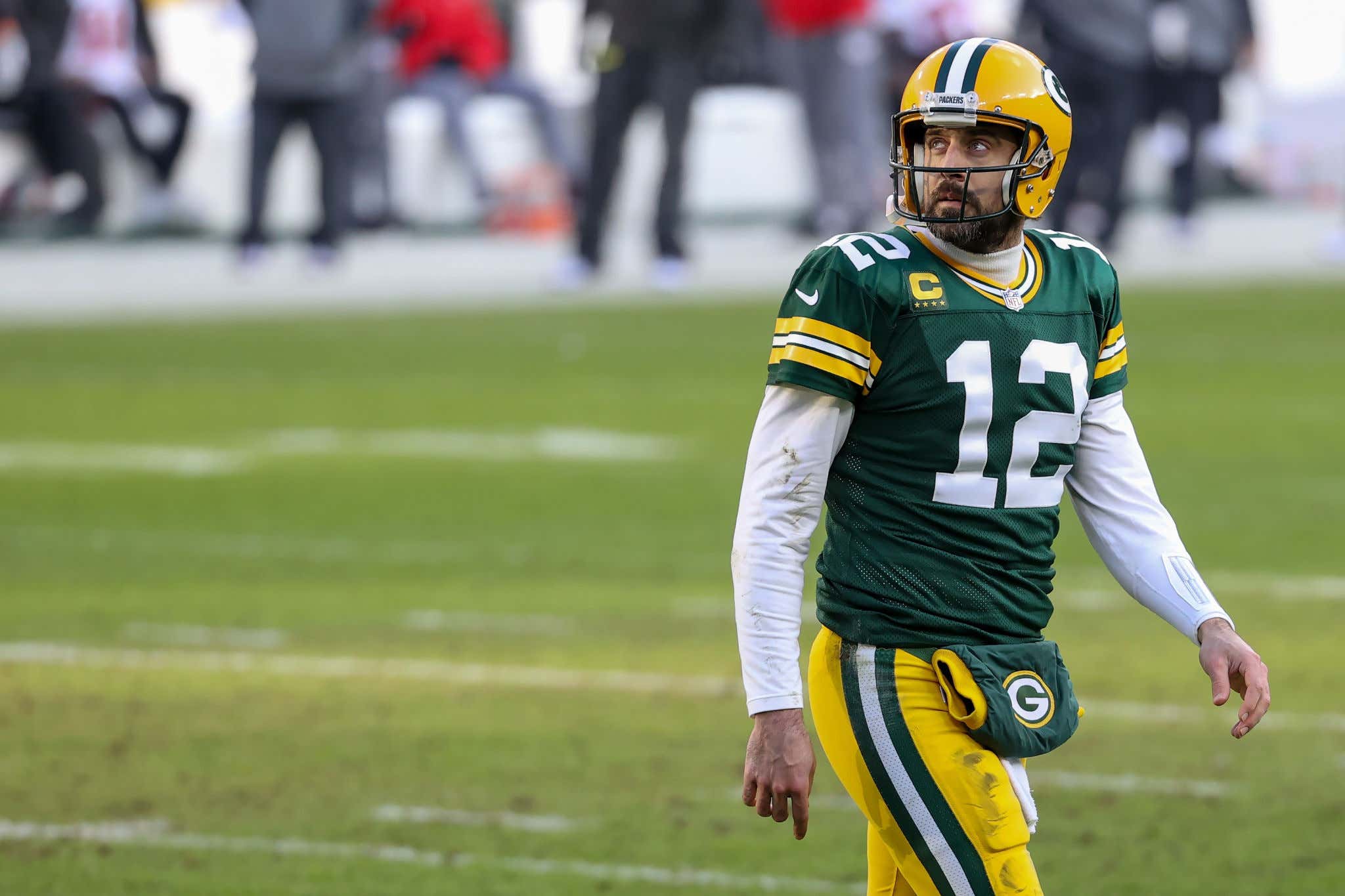 Alright, so since the Packers loss on Sunday and Aaron Rodgers' interesting postgame comments that sent the NFL rumor mill spiraling out of control, there's been nonstop bullshit circling the interwebs. My very good blog and take from yesterday with sensible, reasonable points still stands. Rodgers isn't going anywhere and everyone needs to calm down. Last night we got Mike Florio with a "league source" talking out of his ass about Rodgers claiming he told the Packers he wants a new contract. Rodgers basically told Florio and everyone else throwing around rumors to shut the fuck up in his weekly appearance on the Pat McAfee show just earlier today.

A part of my blog from yesterday…

So what were Rodgers' comments all about? I just think it was a combination of massive disappointment combined with the fact that this team will certainly look different next season….Rodgers was defeated in that press conference and truly didn't know what the future held. The reality is that he's back in Lambeau next season.

Well to dissect that a little bit, yes you are idiots, Mark. You losers drafted a quarterback in the 1st round of last year's draft instead of an offensive skill position player or a linebacker or a corner, and chose to think about the future rather than the present. You thought Rodgers was on the decline and unfixable. Then he dropped a 48 touchdown 5 interception MVP season on your face and now you're going to have to reverse course rather than moving. Yes, you are in fact idiots. Buffoons some might say. Can't put anything past those numbnuts these days that is for certain.

That all being said, Rodgers will be back in Green and Gold next year and I haven't wavered from that statement. It is illogical based on his contract and the performance he just put on the field in 2020 to simply trade that man. Laughable. The cap hit is insane and there is not even close to a guy ready to step in and take over.

Now what may happen is Rodgers gets his contract restructured. This could help himself and the team in the immediate future. Whether it's extending him, reallocating his bonus money to backload it more, adding more guaranteed $ over a stretch out deal, there is a move to be made absolutely. I think this is the likely move for the offseason, but there's no way Florio's "league source" had an inside scoop on this. It's been less than two days, none of these conversations have happened. Will they? I'm sure, but this season just came crashing to a stop let's breathe for a second huh?

In a perfect world the cap hit is lessoned by a restructure and the team is able to bring back Corey Linsley as the center of the future which further fortifies this offensive line. As of now I don't know how they swing that in the current financial situation. But Rodgers demanding a trade or making contract demands? He told Pat he just finished his exit interviews and said good bye to players. He said he'll have certain conversations at some point, as he does every offseason, but they obviously haven't happened yet. Rodgers didn't lose that game and then go into the Packers front office demanding more money. Stop it. Dude doesn't know if he'll see Aaron Jones, Marcedes Lewis, Linsley, etc again. He talked about an equipment dude being moved on from last year being an absolute shock and that's part of why you can never deal in absolutes. Only Siths deal in absolutes, everyone knows that. Hell, when the team moved on from his QB coach Alex Van Pelt that was a shock to the system as well. That's what he meant by the future being a mystery. His future however, is in Green Bay at least for 2021. As I said in my blog, 2022 could be a whole different story unless his contract is reworked. But as far as I'm concerned I'd be absolutely STUNNED if 12 isn't in Lambeau next season for the Green and Gold.

P.S. You want to make Aaron truly happy? On top of restructuring his day that's keeping him in Green Bay for longer, trade Jordan Love. There has never been any point to this guy being on the roster. If you restructure Aaron's deal, Jordan Love serves no purpose.