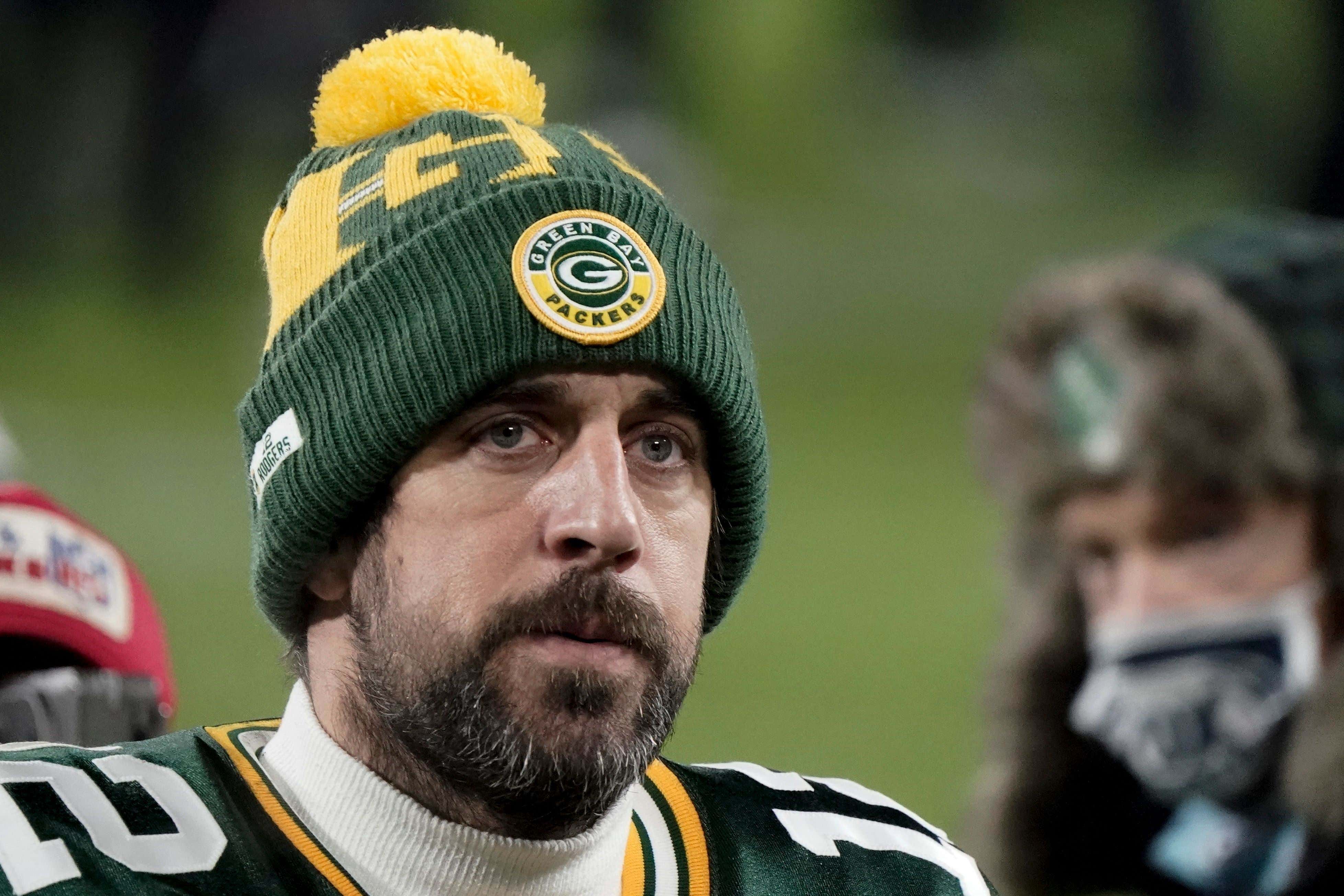 Another year, another NFC Championship Game loss for the Green and Gold. Champagne problems I suppose although not really. I'll never understand people saying rooting for the Packers is being a front runner. They always find creative fucked up ways to rip your heart out and throw it down a sewer drain with no regard for human life. 4th and 26, Bostick's dropped onside kick, Favre's pick in OT against the Giants, Rodgers' strip sack in Arizona in OT, Fitz again in OT, anytime they'd play Kaepernick, and now this shit. 4 NFC title losses in 7 years. Two in absolutely blow out fashion where Green Brady Bay (my brain has been incepted by Tom Brady) was never in it from the jump. Two that will absolutely eat away at you for years to come. Not great, Bob.

So the big question now is, coming off an MVP season that saw him re-set his own career high in TD passes, where does 37 year old Aaron Rodgers go? Everyone seemed to freak the fuck out with his postgame comments about the future.

And by freaking out I mean…

Love ya Liz, but let's come back to reality here for a second. Aaron Rodgers is going to be the quarterback of the Green Bay Packers when the 2021 season gets underway. I just don't see how he isn't. First of all who are you replacing him with? Backup QB Tim Boyle? TIM BOYLE from UCONN. Love Tim, but not a chance in hell. Last year's 1st round pick Jordan Love who was literally inactive every single game and could not be more raw if he tried? He's not even close to ready to start a football game as far as I'm concerned. Has his mechanics improved since training camp? No question, but 'starting qb' is a position he is still years away from in my mind. You're certainly not drafting a QB and if you're not going to trade for one either. Oh gee I guess that leaves you stuck with the MVP of the league Aaron Rodgers. Shucks.

On top of there being no logical replacement here's Rodgers' contract…

It's not like he's a free agent after this year or there's an out before the season gets going. Nope, you're looking at a $37 million cap hit. He's not going anywhere! He's not going to San Francisco. He's not going to New England. He's not going to Indy. You think they're trading for a 37 year old QB with that kind of contract? What are they giving up? If you're dealing for a QB this offseason it's Deshaun Watson, Stafford, or Wentz, not Rodgers. I guess a team could go nuts if he were to become available. He is the MVP of the league, but I think you'd be better off going crazy for Watson instead.

That dude is going to be putting on the green and gold in 2021 and there's not a single doubt in my mind that thinks otherwise. Now could 2021 be the final curtain call in Green Bay? That I won't dispute and if the front office decides Love is the guy they want, they'll need to give him a few years to prove that, which means playing time. That's sickening to think about since I hated that pick so much, but that's the reality I suppose.

So what were Rodgers' comments all about? I just think it was a combination of massive disappointment combined with the fact that this team will certainly look different next season. The offense had the ball twice in the 4th quarter coming off a Tom Brady interception down just 5 and stalled on back to back 3 and outs. This was way different than any playoff loss Rodgers has ever had. The game was in his hands in the 4th quarter multiple times, and the offense came away with nothing to show for it. Yes, LaFleur had the inexcusable kick on 4th and goal on a 3rd drive in the 4th quarter, but before that there was a prime opportunity to do something and the offense came up short. Rodgers was defeated in that press conference and truly didn't know what the future held. The reality is that he's back in Lambeau next season.

Now for his teammates? Aaron Jones is all but gone. It sucks he goes out like that with such a bad game, but he'll get the bag in the offseason from someone like the Jets. Jamaal Williams, someone Rodgers loves, is a free agent as well. His all pro center Corey Linsley is likely gone as well, with a huge payday coming his way too. I'd assume Marcedes Lewis moves on as well. Kevin King too, although we're probably happy about that one. Fact of the matter is there will be impact players missing from this team next season.

On the flip side there's a ton of talent coming back. Rodgers will still have this WR core of Adams, MVS, and Lazard along with Big Bob Tonyan. AJ Dillon will likely become the guy next year at running back and who knows maybe the Packers go nuts and draft a skill position player in the draft, okay let's pump the brakes on that pipe dream. I personally would love for them to focus on defense for every single pick and just revamp the whole thing. Get rid of Mike Pettine for the love of god and actually try to stop offenses next season. Just a thought…

But to alleviate the worries, I don't see a scenario where Rodgers isn't the guy next season. There just isn't any logic pointing that way, even if Rodgers wants out (which is not the case). It makes little to no sense for the organization to go that way this offseason. Wipe away the tears, we'll do this ol' song and dance at least one more year in Green Bay. Then the pain comes.