A Harry Potter live-action TV series is in early development at HBO Max. Sources tell The Hollywood Reporter that executives at the WarnerMedia-backed streamer have engaged in multiple conversations with potential writers exploring various ideas that would bring the beloved property to television. Sources say broad ideas have been discussed as part of the early-stage exploratory meetings.

Harry Potter was a cultural nuclear bomb that swept the entire country for DECADES. And whatever you want to say about it being a kids property or whatever, but it is a legitimately fascinating world with compelling characters and a great story. The only problems I have with that franchise at all are:

#1. They never made a new Quidditch World Cup game 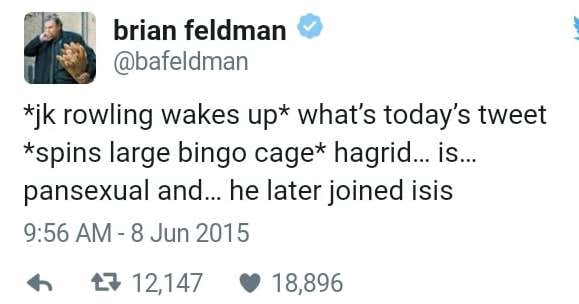 I'm willing to look past all of that for good Harry Potter content, though. If this ends up going into serious development, the big questions will obviously be the cast, the show runner, and the budget. This will need a creative show-runner that will avoid old-school Harry Potter shit, like making the goblins WW2-Era propaganda depictions of Jewish people, while building an individually intriguing story. The cast will need to properly compliment whatever the era is, and the budget will have to be big enough to build settings and make believable magic with CGI.

A lot of pieces need to come together to make this a good show, but if they do, this could fill that Thrones vacuum HBO is missing.