I have been pretty dark as of late... Maybe it's an unfortunate side effect of COVID 19, or maybe it's this whole Sirius deal coming to an end.  I really don't know.

But I have 3 questions left to ask about the Death Penalty because the subject has stayed on my mind since I did a podcast on executions last week.

First question:  Do you think you could act crazy enough to save your own life?

There was a movie waaaaay back in 1996 (25 fucking years ago!) called Primal Fear where Ed Norton plays a character named Aaron Stampler who is on trial for brutally killing (and gouging out the eyes of) a perverted priest.  In order to convince the court he is not mentally fit to stand trial for his actions, Aaron fabricates a convincing split-personality scenario that the jury eats up when the innocent side of his psyche, Aaron, turns into the violent side, Roy, while on the witness stand.

It's a good movie… Courtroom thriller with a solid script and recognizable cast… But I think some movie-goers may have skipped it only because they didn't approve of all of the gerbils Ed Norton's co-star, Richard Gere, may or may not have shoved up his own ass.

--- By the way: Can you think of a worse rumor for someone to start about you?

I supposed being labeled incorrectly as an alleged pedophile is the most damning thing an innocent man can endure, but having an unjust and preposterous rumor about you having a gerbil surgically removed from your rectum also leaves a substantial dent.

For the record, that rumor was found to be 100% FALSE, but for those of you too young to remember, Hollywood actor (and People Magazine's "Sexiest Man Alive" in 1999), Richard Gere, had a gerbil stigma stuck to him for DECADES.  And all because some asshole flooded these things called "fax machines" with a phony press release purportedly issued by the Association for the Prevention of Cruelty to Animals, claiming that Gere had abused a gerbil and had an emergency “gerbilectomy” at Cedars-Sinai Hospital in California in order to collect the rodent carcass from his colon. ---

Why do I mention this movie now?… Well, I just remember how Edward Norton's performance was so convincing to me (and the make-believe jury) that I always wondered if I would have the acting chops to do something similar when I eventually murder a priest and then try to escape the chair?

My answer is yes… I think I do have those acting chops.

Especially after the supporting performance that I provided for that hack Sean Astin in Rudy. 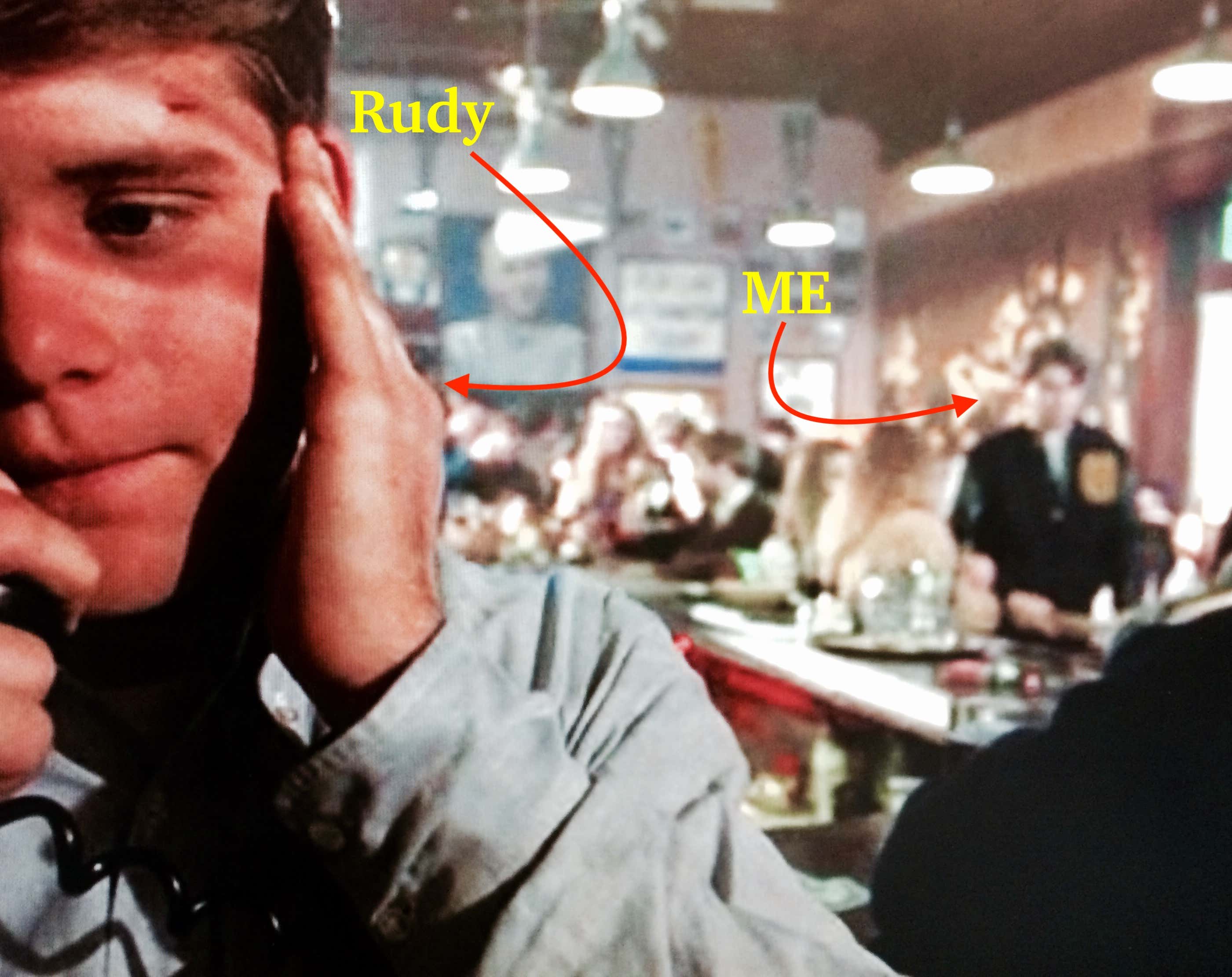 Then I read the story of Andre Thomas… A story I will tell in my own words but most of the details were culled through Wikipedia with a couple of local newspapers thrown in.

WARNING: THIS IS WHERE WE GET DARK

(and not in a Sasha Grey way)

He used a different knife to murder each member of his family, so as not to "cross contaminate" their blood and to also "allow the demons inside them to live."

After his victims bled out, Andre proceeded to cut out the children's hearts.  He then went to retrieve his ex-wife's heart, but inadvertently removed a piece of her lung instead.

He then stabbed himself in the chest but did not die… Instead, he got up, placed the organs in his pockets, and walked to his own house, where he moved the hearts (and piece of the lung) to a paper bag which he threw in the garbage.

He then called his ex-in-laws and left a voicemail that went exactly like this:

“Um, Sherry, this is Andre. I need y'alls help, something bad is happening to me and it keeps happening and I don't know what's going on. I need some help, I think I'm in hell. I need help. Somebody needs to come and help me. I need help bad. I'm desperate. I'm afraid to go to sleep. So when you get this message, come by the house, please.”

He later turned himself into the police, was treated and released at a local hospital, and made a full confession saying he believed his ex-wife was Jezebel and that little Andre Jr. was the anti-Christ.

Five days after the murders, he removed one of his eyes with his bare hand and told medical personnel that he did so after reading a Bible verse about plucking out one’s eye… I believe that verse is from Matthew 5:29- “If your right eye causes you to stumble, gouge it out.” but I cannot be sure because the bible is chock-filled with shit that is arguably more preposterous than the aforementioned gerbil rumor.

He was then evaluated by three specialists, all of whom concurred that he suffered from some form of schizophrenia… This seems like a layup to diagnose, but what do I know?

However, after 45 days in a secured mental health facility, his caretakers there ruled that his mental illness was mostly substance-induced and that he was actually fit to stand trial…  I won't write that again, but I will reiterate that something happened at this new facility that caused doctors to say this obviously insane man was deemed fit to try because the murders were “committed while in a psychotic state brought on by his voluntary use of drugs and alcohol.”

Now, I have been lucky enough to have voluntarily used almost every type of drug and/or alcohol you can imagine.  And, in my various stupors, I have even considered abandoning my wife and kids in the wilderness and taking off for Mexico.  But at no time during my binges have I considered multiple homicides, infanticide, and suicide (which he failed)… Much less cutting out someone's heart… Much less ripping out my own eye.

Edward Norton tussled his hair a little bit and changed his accent in order to fool a jury… Andre Thomas did A LOT more than that, but, apparently, it wasn't enough.

Thomas went to trial and the proceedings were swift.  The court convicted him of murder on November 3, 2005, and sentenced him to death.

So when I say the proceedings were "swift", the murders took place in March of ’04 and by November of the following year, he was sent to death row (minus one eye).

His attorneys contend the all-white jury got to their decision so quick at least in part because Andre was black and his ex-wife was white.  But the state contends that the shocking brutality of the crime and the tender age of the victims played more heavily into the jury’s decision to access the ultimate punishment.

Thomas was then placed in the Polunsky Unit, where the Texas state death row for men is located.

While at Polunsky, he again attempted suicide, this time by cutting his throat, but prison doctors were able to save his life… So, for those still keeping score, that made 3 murders, 3 organ harvests (from others), 1 successful eye removal (from his own head), and 2 unsuccessful suicides for Andre Thomas.

I will fast-forward just a bit… On December 9, 2008, Thomas removed his left eye, rendering himself completely blind (obviously).

Here's the interesting part- After removing his second eye, this crazy sonofabitch ate it, claiming it was necessary to prevent the United States Federal Government from reading his thoughts.

That latest "antic" got Thomas moved from Polunsky to the nearby Jester IV Unit for psychiatric evaluation and treatment, but he is STILL awaiting the needle… Although, he does not have a scheduled date of execution.

So here are my final 2 questions…

What does a man have to do to prove that he is not fit for execution on the grounds that he is mentally incompetent?

And, in the case of Andre Thomas, is this blind murderous suicidal crazy bastard just better off dead?

My answer to the first is "Nothing else."… This guy has checked all the boxes I require for too-crazy-to-kill status.

And yet the second answer is a hypocritical and resounding "Yes."

As always, The Jonas Brothers sing in 2 minutes and 55 seconds what it took me nearly 2,000 words to write…

I vow that next week I will be CONSIDERABLY more light and airy because The Twisted History of Sex Toys is scheduled to drop on 1/27 and I am currently knee-deep in tales of ancient fake dicks.

And who can be melancholy when they are chock-full of dildoes?