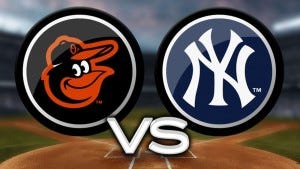 Huge series coming up with the Orioles coming to town just 4 games back of the Yankees. The Yankess have a huge chance to sweep a series that will distance them from the pack but at the same time just getting a series win, grabs us another game while eating up 3 more days on the schedule before heading off to play weaker teams on the road.

Tonight kicks things off with 2 pitchers, in Eovaldi and Chen, who are having pretty opposite seasons with Chen pitching pretty well but getting no support. Eovaldi has gotten unreal run support from our lineup and with this game being at home, where the Yankees score, there is no reason that tradition shouldn’t continue. Luckily the bullpen is fresh after a day off so a normal 6 inning start from Eovaldi should be enough to get a win.

Wednesday seems like a game the Yankees should easily win with Nova going up against a shaky Gausman. That’s probably why this game scares me the most of the whole series. With Nova pitching decent since he has come off the DL, its going to be important to get him and early lead, similar to Pineda, so he doesn’t try to force pitches in places they shouldn’t go and have a meltdown. On top of that, the Yankees haven’t scored a ton of runs with him on the mound but maybe a trip back to the Bronx changes that.

The series wraps up on Thursday with a battle of “aces” and Tanaka facing Ubaldo in a day game. Tanaka gives the Yankees a quality start 2/3 of the time he takes the mound this year and Ubaldo delivers one less than 50% of the time. With about half the Yankees lineup hitting .400 against Ubaldo and Tanaka on the mound, this looks like a mop up game for Tanaka before hitting the road.

While it’s easy to say the Yankees will sweep this series, this will be an important series to see how we play against a possible playoff team and our biggest division rival right now. It also gives the Yankees a bunch of control of their own destiny, which is really the biggest thing you want your team to have as we get deeper into the 2nd half.