You know how most childhood movie stars end up ultimately just drifting away into obscurity? Or better yet, they stick around for a little only to lead a life of constant sex, drugs and rock n’ parole? Well as it would turn out, Corey Feldman is still not an exception here. Because here is the square root of Corey Squared performing his HIT NEW SINGLE “Ascension Millennium” in front of about 6 parents and 15 children after the State College Spikes game on Sunday (not even gonna recap the Spikes game since we all know how that one went). The performances was so bizarre, in fact, that the Spikes had to actually apologize to their 21 fans about it. 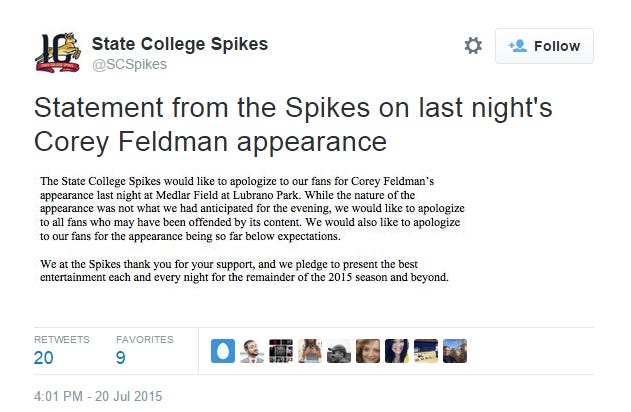 Now I have a little bit of an issue here with the last sentence in that first paragraph about the “appearance being so far below expections”. 1) Anyone who saw the music video for Ascension Millennium knew exactly what to expect from that performance. And 2) if you saw the music video, you’d know that this performance actually blew any expectations you had out of the water. I honestly thought that was a Michael Jackson hologram out there for a second. Was it bizarre to watch him basically perform his weird ass song to a 5-year-old’s birthday party? Sure. But he still brought the heat. Doesn’t matter if he’s in front of 21 people or 21 thousand, Corey Feldman is still going to put on a show because that’s all he knows how to do. But yeah, that was really weird and I think I’m just gonna go watch The Goonies on repeat until this is cleansed from my memory.