Daily Mail – It’s long been believed to be nothing more than an urban myth, but now a McDonald’s manager has confirmed the existence of the fast-food chain’s secret menu.

In a thread on Reddit, the staff member, who goes by the username orchidhibiscus, from Glasgow, revealed that off-the-menu orders can be taken, including one burger known as the McGangBang.

Under the thread name ‘I Am A McDonald’s Manager Ask Me Anything’, the worker said customers can ‘add, remove or change ingredients by special request’.

At 28 I kind of like to think of myself as a somewhat mature adult (career as a professional smut blogger not withstanding). But if there’s one thing I’ll never grow out of, ever, under any circumstances, it’s pummeling late night McDonald’s any time I get super drunk. I know a lot of you are right there with me on this. Basically the second that 5th, maybe 6th drink hits your lips it’s basically a stone cold guarantee Mickey D’s is getting hit up on the way home. In a place like NYC with a 24 hour McDonalds on every other corner it’s a special combination of a dream and a death wish. So I don’t care how many health advisories come out, how many menu tweaks they make in response to the obesity crisis, or how many times Morgan Spurlock shows how the food literally murders your body – I won’t stop going until I stop breathing.

Anyway I know that some of you are well aware of the secret menu and may have tried some (or maybe all) of the items, but now that it’s officially confirmed, let’s power rank our options. 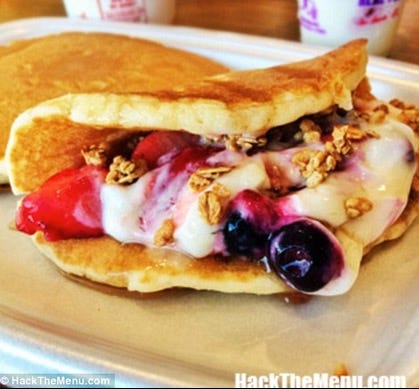 The McCrepe is a sugary combo that blends the McDonalds hotcake and loads it with yogurt parfait and is topped with granola and syrup. It is a DIY item and is created by ordering hotcakes and the parfait

Not even dignifying this with a ranking. Crepes? This is America motherfucker. These colors don’t run. Leave it for those pussies in Paris to eat with their pinkies up in between macchiato sips.

(You know, just to put this in there, I had a whole mess of crepes this morning. They’re just like pancakes, maybe even better. They are the really thin pancakes. It’s just a French word for them. Put any syrups you want on them. I wish I could crawl into one of those right now. I’d eat my way out from the inside.) 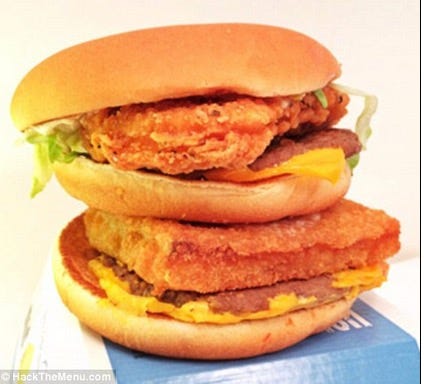 The Land, Sea and Air burger – This towering burger combines all three of McDonald’s most favored patties including two beef burgers, a Fillet-O-Fish and a McChicken combined with however many buns you wish for $8.49.

Automatic point deduction for the Filet O Fish. Also known as, how poor people tell their friends they eat seafood. No offense.

7) The All American Burger 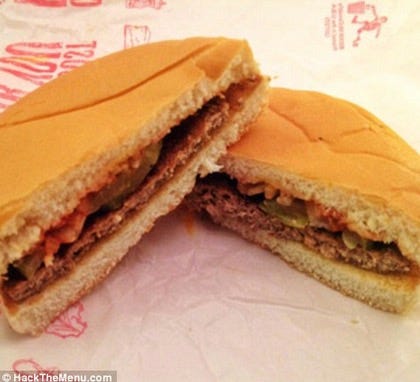 The All American Burger: More familiar to older customers of McDonalds, the All American burger is simply without cheese and harks back to a simpler time for the fast food giant.

I appreciate the nostalgia and I’m sure this is simply delicious but come on, look at the competition. Old school only gets you up to the 7 spot. 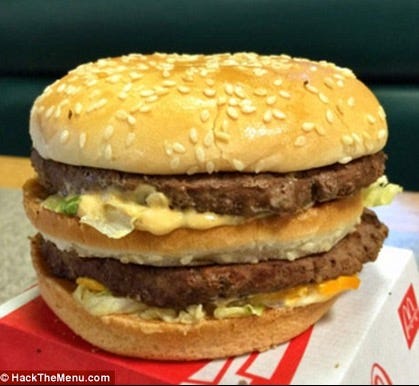 The McKinley Mac is one of the more famous of the secret menu creations. Put simply it is a Quarter Pounder sized Big Mac.

Again, definitely delicious, but no points for being boring. Would I eat 3 of these in one sitting and love it? Of course. But this list is all about the novelty. I dozed off just reading about the McKinley and All American. 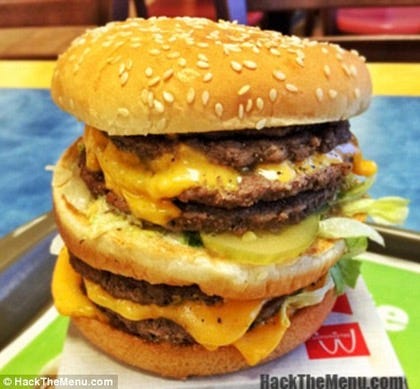 Now we’re talking. Big Macs are awesome. A staple of American fast food. What’s the only way to make them better? Make it bigger. Literally multiply it by 6. Boom. Clogged arteries are the best arteries. 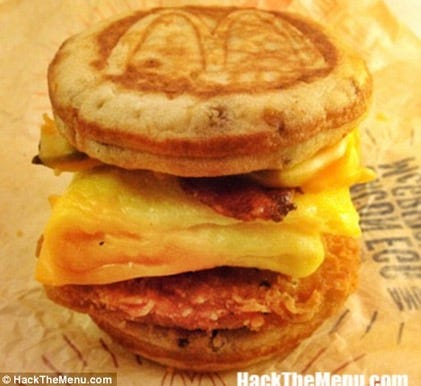 The Chicken McGriddle, is slightly more modest. It is a breakfast sandwich that substitutes a fried chicken patty in place of the sausage, egg, or bacon and is actually served in the Southern states of America

If there’s one thing we can all agree on, it’s that fried chicken is awesome. Sure it’s become a black stereotype, but in my mind nothing is better for racial harmony and making us realize that we’re all the same than crushing some delicious fried chicken. Black, white, purple, yellow, green, we all agree. Put it in a McGriddle and, god damn, that’s heaven. 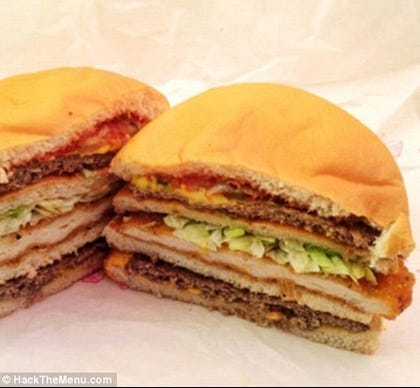 The crudely named McGangBang is the most infamous of the McDonald’ secret menu items. The burger mixes a McDouble with a McChicken sandwich and combines the two together for just $2.

Look at that fucking thing. Perfect. I know I’m not the only one who gets stuck sometimes wondering if I’m in the mood for burger or chicken. Ok I normally just get both but still, how about combining them into one? Then maybe eating two of those? What a compromise. 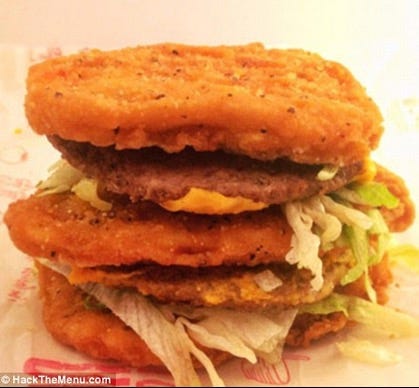 The Big McChicken is one of the most elusive items on the McDonald’s secret menu. In essence the burger is Big Mac but instead of using a split-level, two decked bun, it uses the McChicken patties instead. Topped off with Big Mac sauce, the monster burger is a sight to behold.

The 2 spot was a toss up between this and the McGangBang, it was the “elusive” that pushed the McChicken over the top. Makes you feel extra special when you get one, not just part of the mainstream burger culture. Kind of like a hipster fast food eating fatass attitude. 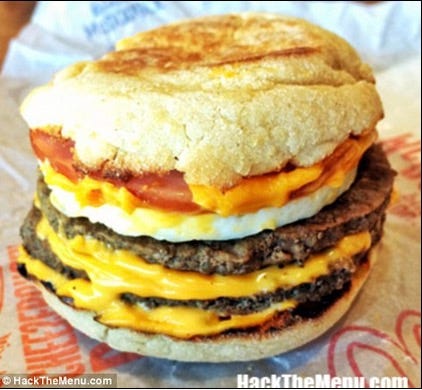 The Mc10:35 burger is one of the most difficult of all McDonald’s secret menu items to obtain. It is only available during a brief window when the breakfast and the regular menu’s crossover in the kitchen. The combo is a double cheeseburger, with a sausage egg McMuffin and a bacon egg McMuffin