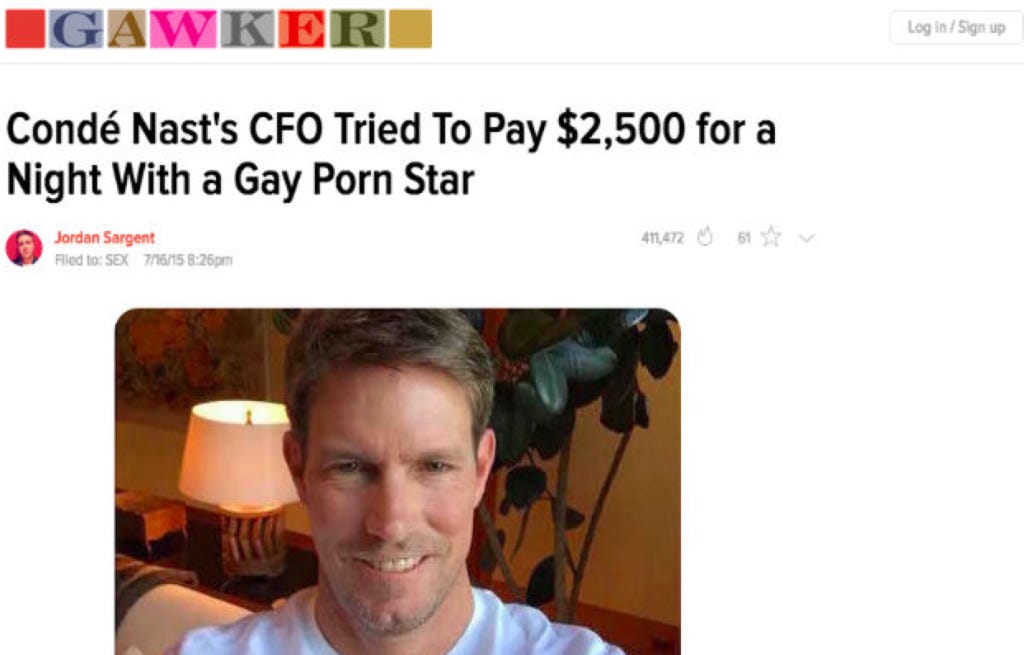 Gawker – Tommy Craggs, the executive editor of Gawker Media, and Max Read, the editor-in-chief of Gawker.com, are resigning from the company. In letters sent today, Craggs and Read informed staff members that the managing partnership’s vote to remove a controversial post about the CFO of Condé Nast—a unprecedented act endorsed by zero editorial employees—represented an indefensible breach of the notoriously strong firewall between Gawker’s business interests and the independence of its editorial staff. Under those conditions, Craggs and Read wrote, they could not possibly guarantee Gawker’s editorial integrity.

“I’d learned of the vote via gchat with Heather Dietrick, who throughout the day was my only conduit to the partners, Nick Denton included. The only reply to my pleading emails about yanking the story was a sneering note from Gorenstein. That is to say, none of the partners in a company that prides itself on its frankness had the decency or intellectual wherewithal to make the case to the executive editor of Gawker Media for undermining (if not immolating) his job, forsaking Gawker’s too-often-stated, too-little-tested principles, and doing the most extreme and self-destructive thing a shop like ours could ever do.”

“All I got at the end of the day was a workshopped email from Denton, asking me to stay on and help him unfuck the very thing he’d colluded with the partners to fuck up.”

“On Friday a post was deleted from Gawker over the strenuous objections of Tommy and myself, as well as the entire staff of executive editors. That this post was deleted at all is an absolute surrender of Gawker’s claim to “radical transparency”; that non-editorial business executives were given a vote in the decision to remove it is an unacceptable and unprecedented breach of the editorial firewall, and turns Gawker’s claim to be the world’s largest independent media company into, essentially, a joke.”

“I am able to do this job to the extent that I can believe that the people in charge are able, when faced with difficult decisions, to back up their stated commitments to transparency, fearlessness, and editorial independence. In the wake of Friday’s decision and Tommy’s resignation I can no longer sustain that belief. I find myself forced to resign, effective immediately.”

This was the big story at the end of last week and, if you somehow missed it, the gist of the story is that Gawker outed publishing giant Conde Nast’s CFO David Geithner (and brother of former Secretary of the Treasury Tim Geithner) in his alleged attempt to pay a gay porn star for sex. The executive board for Gawker, composed mostly of business people, lawyer types, and founder Nick Denton, then opted to pull the article after the Internet rained hellfire down upon them and advertisers like Discover started pulling campaigns. Then the editorial people at Gawker rebelled and publicly condemned the decision and now, here we are, with the sky falling at an alarming rate for a site that often puffs its chest out for how independent and open it is about its place in modern online journalism.

There’s definitely a bit of karma here in the situation given that Gawker, a site that probably traffics in Internet outrage “Let’s rally and get everyone fired” pageviews as much as anyone, is falling apart because of the soft and constantly self-righteous attitude they’ve profited off of turning the Internet into. For years, Gawker has served as this hypocritical ombudsman of the Internet, racking up billions of pageviews starting as a site for reporting on things like what media people were fucking whom, then graduating to the bevy of athlete dick pics that was Deadspin a few years ago, to now fighting for their financial future in court because they somehow think a secretly filmed video of Hulk Hogan banging a shock jock’s wife is a freedom of the press issue instead of something just really fucking scummy. Any bad things coming for a company that seems to relish in being the Internet’s tattle tale hall monitor seems well-deserved.

But at the same time, for as sniveling and weaselly as some of the writers may be and how relatively screwed up it is they ran a 2,000 word article because some random dude in a publishing company’s executive office might like a little well-paid unclipped cock on the side, the editorial people are correct here and sum up the problem with Gawker: All they do is try to have their cake and eat it, too. They have Jezebel rallying against every feather soft indignation that a woman has ever experienced while they’re possibly destroying a married man’s life not because of corruption or helping the public but just because people will see a headline like that and click the hell out of it. At some point, you have to own what you are. For as much as it pains me to hear about “size 6 skinny jeans” every time Barstool gets in trouble online, Barstool is what it is. Our writers think different things and view the world in different ways but ultimately everyone’s opinion or jokes are their own and they can express them however they choose. You pay a price for believing in something instead of adapting everything you do to get more clicks at all costs.

So for Gawker to have presented itself just weeks ago in the Hulk Hogan lawsuit as one of the last bastions of unbiased, independent journalism only to cower down to the point that even their overly precious writing staff can’t believe what pussies they are in the face of public pressure…there’s poetry in that, even if it now means that honest journalism that makes people uncomfortable seems like it can no longer exist in 2015.