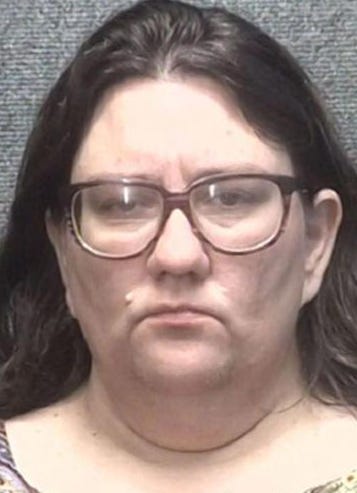 (Source) Maybe she thought it was her last supper. A woman who allegedly tried to dine and dash out of a Myrtle Beach, S.C., seafood buffet reportedly told cops the son of God would pay her tab.

April Lee Yates, 51, was arrested and charged with defrauding a restaurant after the incident at Bennett’s Calabash Seafood Buffet Restaurant. WMBF News reports that the eatery’s manager called the cops after Yates, who had been there for four hours, started a disturbance with other customers. The restaurant staff asked Yates to pay up and leave, but she refused. When the cops arrived about 9:15 p.m., Yates reportedly told them she didn’t have the money to pay her tab.

The cops said they asked Yates how she planned to pay the bill, knowing before she even sat down to eat that she didn’t have any cash. She told them someone else would pay for her. When asked who, she replied, “Jesus,” according to reports.

I was all set to make fun of this chick and the fact the she legit probably sat at her booth saying to herself “Jesus will find a way” as if Jesus would actually come down from the heavens and pay for her all you can eat macaroni and ham. But guess what? Not gonna do it. You know why? Because I took one look at her mugshot, and you know what it said? It said I’m the craziest motherfucker alive. She looks like a woman that either 1) Has a house full of cats 2) Drowned all her children in a bathtub or 3) Is part of that weird cult from The Leftovers only if it wasn’t a TV show and instead real life. Either way I ain’t fucking with that shit. You know the old saying, don’t stick your dick in crazy, well that goes with blogging too. Don’t blog crazy because crazy will come and find you and split your open and eat your insides.