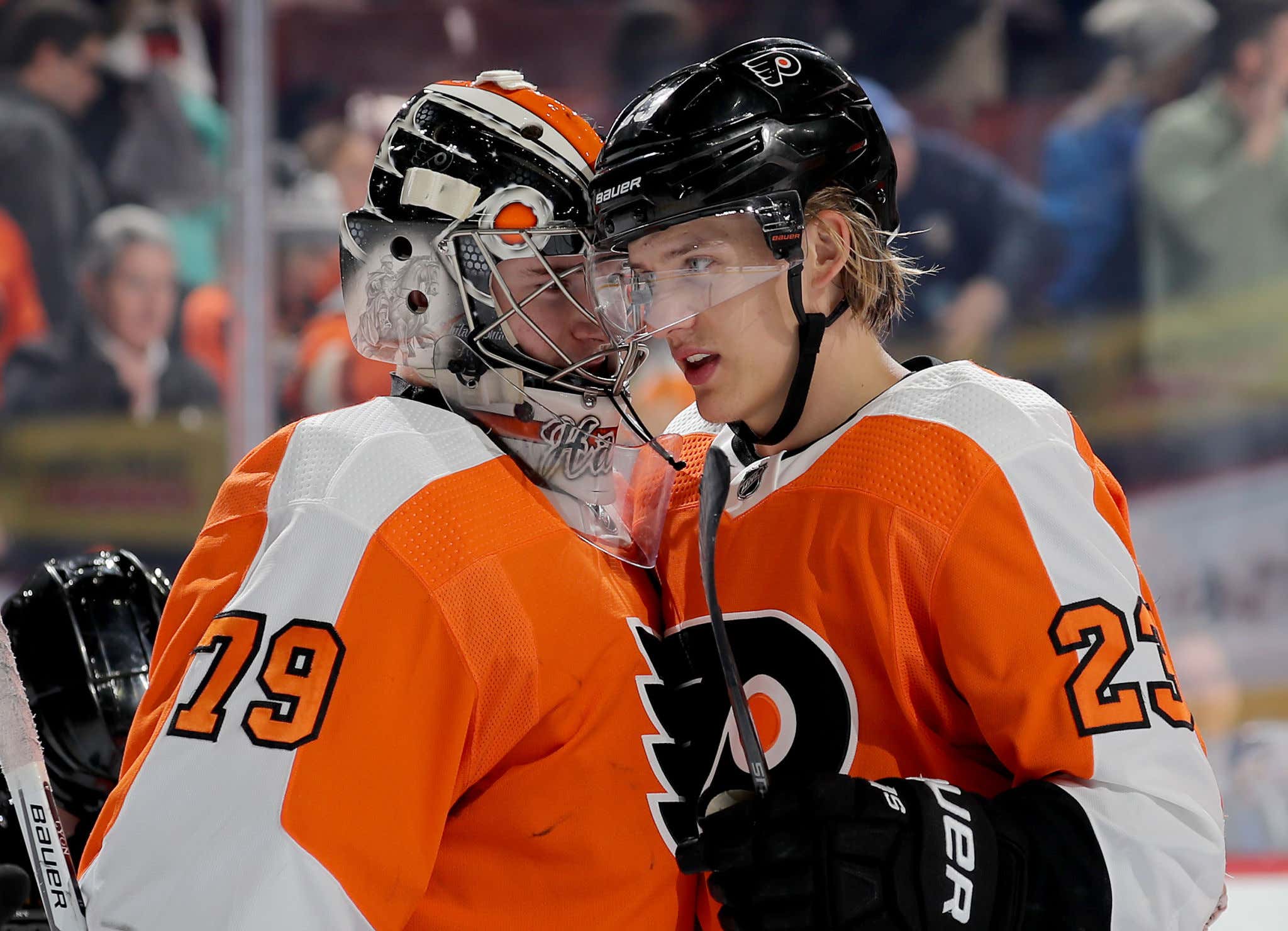 The Flyers were on the brink of irrelevancy. Sure, fans knew for a while that there was plenty of talent waiting in the pipelines for this organization thanks to Ron Hextall drafting like a maniac. But the team went 7 seasons without a playoff series win. They were playing lifeless hockey that lacked any source of hopeful inspiration for the future under Dave Hakstol. The organization fired its general manager and head coach before the end of the 2018-19 season. And while the young talent in the prospect pool was great to dream about, the core of this team was aging and it looked like the window for this team would be locked before it even had a chance to open. Last year was going to be a make or break season for this team.

Then the Flyers went out and hired Alain Vigneault. They traded for and signed Kevin Hayes. It was Carter Hart's first full season in the NHL. They won 10 out of their last 12 games before the regular season was cut short due to the pandemic. They finished 4th in the conference. Rattled off 3 straight wins after the season resumed in the bubble to take the top seed in the Eastern Conference playoffs. Finally won another playoff series in 6 games against Montreal. And eventually lost in 7 games to the Islanders in the conference semis. Alain Vigneault was a Jack Adams finalist. Sean Couturier won the Selke Award. It was a damn good year for the Philadelphia Flyers.

And now when you look at the landscape of Philly sports, this looks like the team with the best chance to bring another championship to this city. Which means that the pressure is on for 2021. And it sure as shit seems like this roster is ready for it.

The Forwards: Deep As Fuck

The Flyers didn't go out and make a ton of moves this offseason. I know people out there (and for a while, myself included) wanted Chuck to pull the trigger on the Laine trade. But even though the team didn't go out and get any "new" forwards this year, there are still two huge additions they should have ready to go for Wednesday night. Those will be a healthy Oskar Lindblom, after returning from his Ewing's sarcoma last season, and Nolan Patrick who is back after dealing with migraine issues all of last year. They're not free agency signings but having both of these guys back at full health to start this season is just as good, if not better considering they're already familiar with AV's system and a huge part of the locker room. And with both of these guys being back, this forward group is deeeeeeeeeeeep. Like really, really, really fucking deep. How deep? I'll show you.

That's 4 full lines of guys who can produce. 4 lines of guys who can play in pretty much any situation. I'd say maybe the Patrick line could be a bit of a liability defensively, but they shouldn't have to worry about that too much as the 3rd line. The Flyers might not have the most top end forward talent in the league, but they sure as shit have the most top-to-bottom. And when you have that many quality players competing for ice time, that just makes everybody that much better. That's how good teams become great. The top line has two potential 30-goal scorers on the wing with a Selke winner up the middle. The 2nd line has the ability to be one of the most creative in hockey with how well all 3 of G, Hayes and Farabee see the ice. Plus they all love to sauce.

It's also worth noting that Farabee changed his number this season to 86. Could get some Kucherov vibes out of him in the future with that.

The only question mark I potentially see with these forwards would be JvR, but he has the ability to get hot. When he's playing with guys like Voracek and Patrick who can drive possession and get pucks to the front of the net, that is JvR's wheelhouse. And if changes need to be made at some point, there's always Morgan Frost waiting for a chance to make a name for himself.

And then not only is the 4th line as gritty as they come, but all 3 of these sick bastards could play in the top 6 if they wanted to. Just watch these highlights from last night's split squad scrimmage and try to tell me that these are 4th liners.

Yeah. Have fun trying to match a bunch of plugs against this line. They are going to feast against some of these matchups this year. And if for any reason they need to beef up and get any grittier at any point throughout the season, there's always Left Wing Sam Morin ready to come in and beat the shit out of some poor bastards.

Ivan Provorov has already been the guy on the blueline for the past few seasons. In both of the past 2 seasons, he was top 5 in ice time. He logs monster minutes for this team and has proven that he's a true #1 defenseman. But when Matt Niskanen retired this offseason, that just meant that he needs to dial it up even more this year. It's not just enough for Ivan Provorov to be one of the most dominant players on this team, but he needs to be one of the most dominant players in the league. And they say that a rising tide lifts all boats, so one of the biggest keys for Provy taking that next step is going to be the rest of the blueline taking a step with him.

From what it sounds like out of camp, Ghost will be starting with Provorov if he's healthy. He's the type of player who really needs to get his confidence back if he's going to resemble anything close to what Flyers fans had dreamt he would become a few years ago. Putting him on that top pair with Provorov will not only give him that confidence boost, but playing with a stallion like Provy will give his play a boost in general as well. Just for fun, let's all remember what used to be and pray that we get something even close to this again.

The Sanheim - Myers pairing had their fair share of difficulties in the playoffs last year. But they're both young and learning. They're still just 24 and 23 (soon to be 24) years old. It was their first playoff experience in the NHL, and you should expect those growing pains out of young defensemen in general. Now I don't think that Sanheim and Myers need to be great this season in order for the Flyers to have the success they're looking for. But they just can't be making any of those mistakes that you'd typically brush off as rookie mistakes this year. They have experience, they have talent, they have the ability to be a really strong pairing for this team. They skate well, they see the ice well, there is a ton of potential there. Plus this is a contract year for Sanheim. I'd love if they could just limit those mistakes because the longer this team can go without shuffling defensive pairings, the better.

As for the bottom 4 defensemen of Hagg, Braun, Gustafsson, and Friedman? Well they're all serviceable. I was really hard on Justin Braun last year but I think he can bring some stability to that bottom 4. I think Hagg gets a lot of unwarranted heat thrown his direction as well and won't completely kill the team while he's on the ice. I'm not crazy about any of them, but I'm also not greedy enough to think that the Flyers need more on the backend. Especially when they have 79 between the pipes.

What more needs to be said? Carter Hart is one of the brightest young stars in the league. This team can go as far as he can take them. Luckily he has a ton of help and depth in front of him. He also has some much needed stability with Brian Elliott returning as his backup. The schedule this year is intense. You're pretty much playing every other day, and every once in a while you're getting a 2nd day of rest. Carter Hart is young, which is great news for the Flyers because you can ride him more this season than an aging goalie. But having a quality backup is more important this year than ever before, and Brian Elliott coming back as that guy is a huge advantage for the Flyers.

The East Division is quite possibly the most loaded division in hockey this year. Carolina and Columbus are both two really pesky teams who are tough to play against, so I'm pretty pumped the Flyers won't have to play against them 8 times each this season. But in losing Carolina and Columbus, they picked up Boston and Buffalo. Which means that the East Division will have 4 out of the top 5 finishers in the Eastern Conference from last season (Boston, Washington, Philly, Pittsburgh). They'll have the Islanders who knocked them out of the playoffs last year. The Rangers who miraculously ended up with the 1st overall pick and got to add Alexis Lafreniere to their lineup. A Buffalo team that added Taylor Hall and Eric Stall over the offseason. And then I still think the Devils sucks. But there won't be any easy nights in the East, if any at all. So this season is going to be an absolute gauntlet, and it'll be tough as shit to make it out of there alive in the top 4 heading to the playoffs.

But I have no doubt that the Flyers get it done. If I had to predict my top 4 right now, I put the Flyers in there with the Caps, Islanders and Bruins. I'd say the difference from the 2nd place team in the East to the 7th place team could come down to single digit points. So it'll be tight in the standings for sure, but I don't see how 4 teams in this division are better than the Flyers are in terms of depth, 2-way hockey, goaltending, and locker room. For the first time since 2010-12, the Flyers will be heading to the playoffs in back-to-back seasons. Book it.

It all gets going on Wednesday night. 5:30pm puck drop against Pittsburgh. Let's rock, boys.