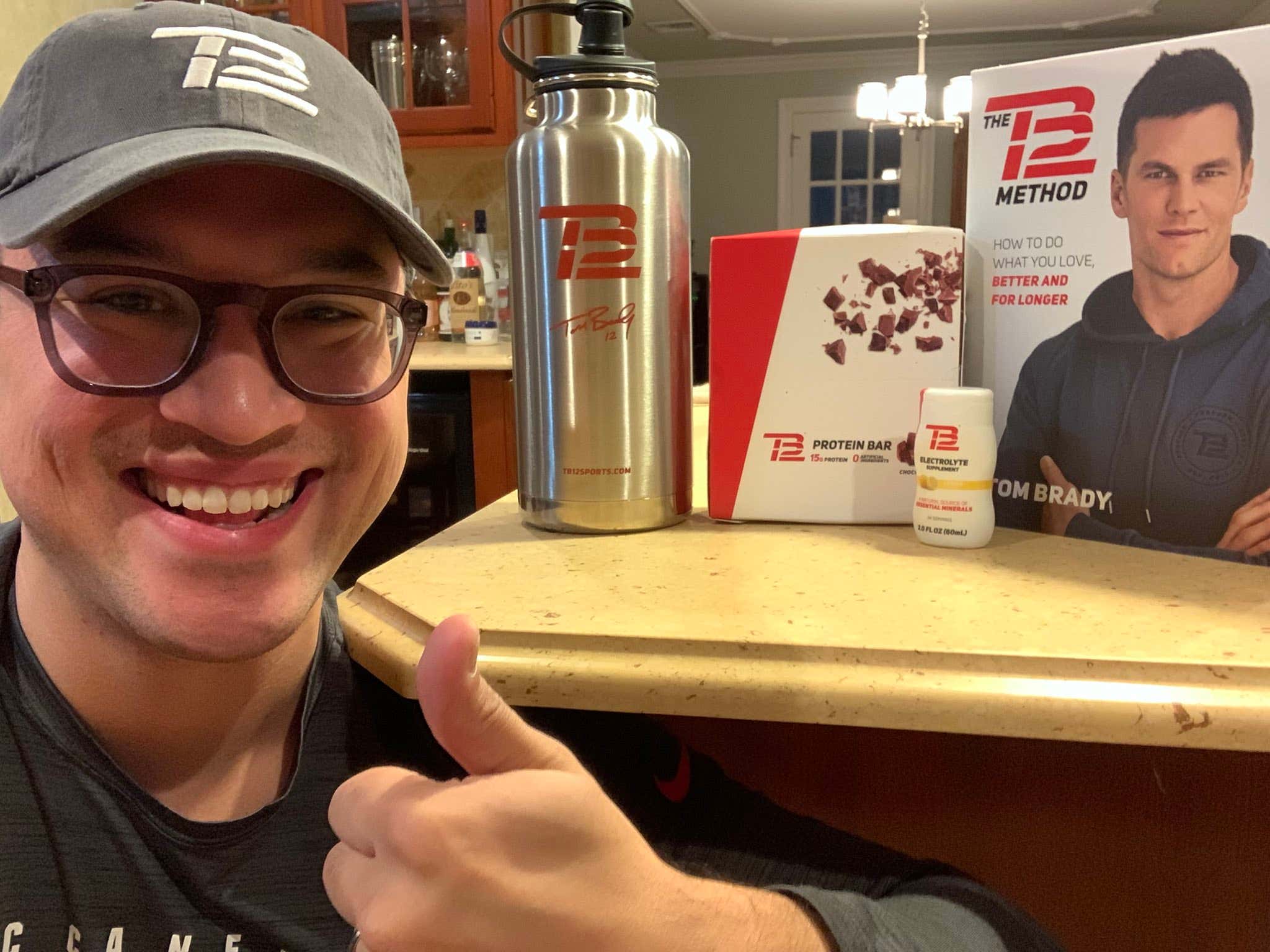 Last Monday, I officially went into post-season mode and started the TB12 Method. The purpose was two-fold:

I'm not a big New Year's resolutions guy, but I just got a Peloton and was going to be working out more, I figured why not put it into hyperdrive with a diet I'd heard a lot about that aligned with Tom Brady and my Bucs? Seemed like an absolute no brainer. After Tom himself endorsed me, it fueled my mission even further:

Summarizing what my daily requirements are:

- Do a Peloton ride at least six times/week

- Get at least eight hours of sleep per night

- Eat only TB12 approved foods via the TB12 grocery list:

The main deal is just shopping organic, it's really not bad. I've just switched from shopping at ShopRite to Whole Foods which has way more of a selection of organic foods and it's very doable. I like a decent amount of vegetables, especially broccoli, so the biggest adjustment isn't taste, it's cooking way more regularly. Sriracha sauce and salsa are allowed which are total gamechangers:

The biggest change for me is the meal isn't protein dominated. It's supposed to be 1/3 protein and 2/3 vegetables and other fruits or approved gains and things like quinoa. But things like beef (steak) as long as they're grass fed and/or organic are approved so it's not like I'm eating cardboard:

And in all honesty, the TB12 protein, especially the plant-based vanilla protein that I use for smoothies, is actually very good. I was skeptical as I'd had some plant-based proteins that were just awful, but this one tastes similar enough to whey where I don't detect much of a difference. It makes morning smoothies a real treat:

The hardest part has been the water. Not as far as ounces per day, that's doable. But right when you wake up you're supposed to drink 20 oz. of water. As a guy who used to drink very little water (30-40 oz./day), that is a chore every single morning. However, I've been doing just unflavored water and electrolytes from Whole Foods, I may switch that to water with the TB12 lemon flavored electrolytes because those also are very good. They make water taste like lemon/lime gatorade. They are not an official partner or advertiser so I say that in full honesty.

The other things people keep asking me about: my dumps. They are different. I would say much more frequent, usually three times a day, but much smaller. I guess that's normal? I used to be a pretty consistent once per day guy like those metamucil commercials. Very regular. Definitely a bit more sporadic now, but I feel a lot better. I feel hydrated and while I am peeing a lot more, my body feels a lot better. I have way more energy at night and the sleep thing is huge. Before I would get about six hours of sleep per night during football season. I've noticed if I'm below eight now, I can really tell a big difference with this diet. But if you're able to make that time commitment, able to afford the increased grocery bill (organic is more expensive), and can combine it with regular exercise, I'd highly recommend the TB12 Method to anyone looking for a new diet or way to look at food. It's definitely made me more aware with what I'm putting into my body and seven days in, I can honestly say my body looks a lot better than it did a week ago. Since the Bucs won on Saturday and are now slated to play next Sunday, I'll be on this for at least another week. Looking forward to keeping it up and hopefully I'll be going through early February! Feel free to reach out to me on twitter with any questions. Go Bucs!