1. First half is in the books and we’re sporting a 47-40 record. The goal was 8 games over .500 but I think – in hindsight, obviously – that 7 games over .500 will do just fine at this point. I say that because we’re holding onto the 2nd NL Wild Card spot while sitting 8 games behind the Cards. There’s a lot of baseball left, and the Cardinals are due for some serious regression. Couple that with the fact that we’ve yet to really hit any kind of major stride this season, and I’d say we have… relative to history… appetizing playoff prospects heading into the second half. It’s pretty much between the Cubs and Giants for the second Wild Card spot. That’s because I don’t anticipate the Mets doing nearly enough at the trade deadline to put legitimate major league talent around their power staff. And I certainly don’t think the Diamondbacks have nearly enough to pitching to be in the conversation come August. Paul Goldschmidt? Stud. Rubby De La Rosa? Not so much. Point is this – we outplay the Giants in the 2nd half and we go to the playoffs. It’s that simple.

2. Interesting observation at this point in the season from this year to last – our run differential isn’t that overwhelming at +16. Last year we held onto a single digit positive run differential into the second half, yet still played sub .500 baseball. The 8-10 game difference between 2014 and 2015 can be directly attributed to our ability to pull out close games. We’re 9-4 in extras. We’re 19-16 in one-run games. And we lead the MLB with 9 walk off wins. Say what you want about the diminished importance of a good manager, but I’m putting this square on Joe Ma. Team’s on a 5 game skid? Hire a magician and win 5 of the next 6. Offense in funk? Cancel batting practice then score 10 runs. In a pitcher’s duel with Clayton Kershaw? Cut the stadium lights and let his arm tire out. Simply put, Uncle Joe is fucking brilliant. 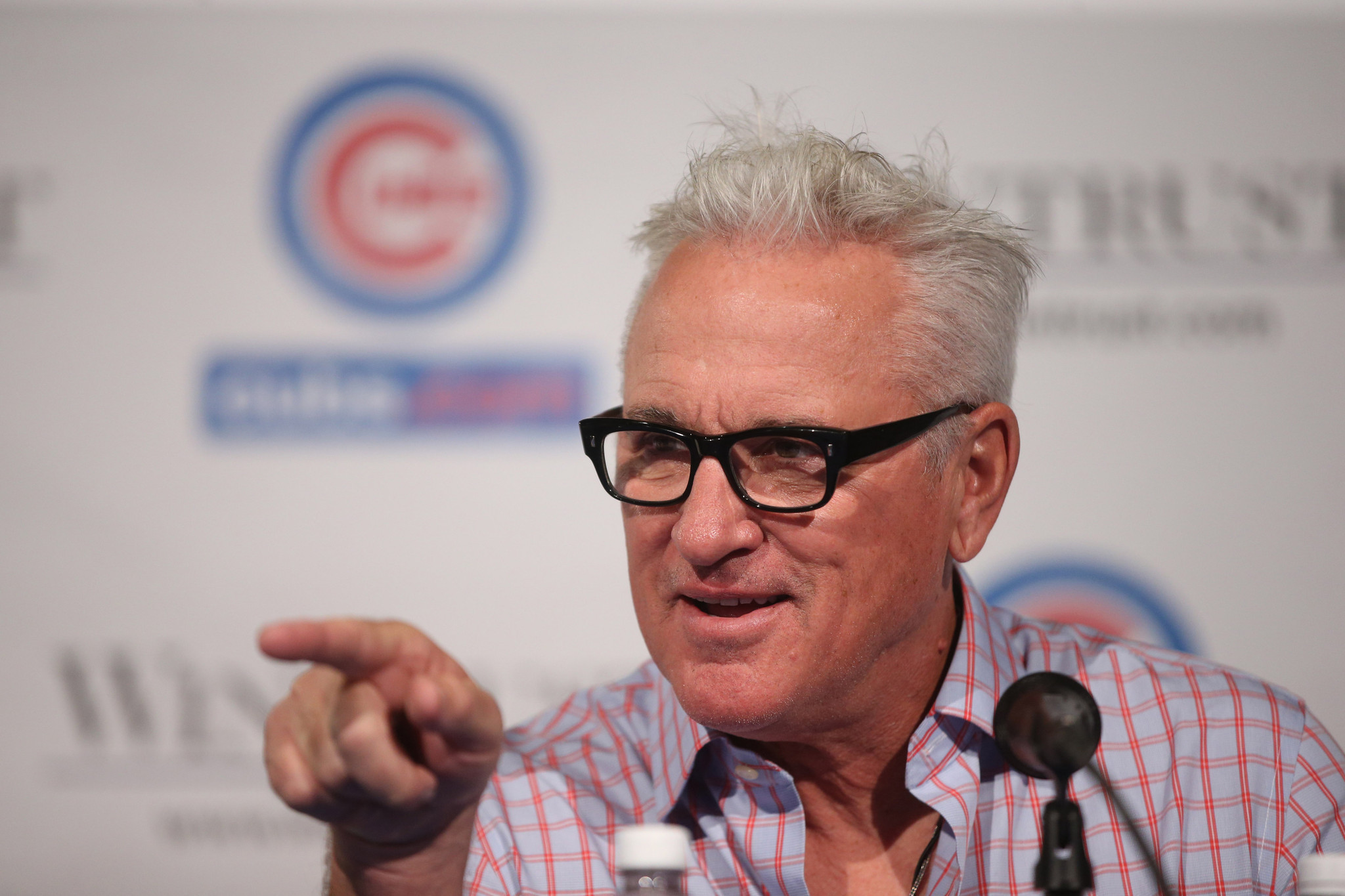 3.  Rizzo and Bryant are studs. I can’t say it enough. They’re so good. Such a treat to watch these guys every night. They’re near perfect baseball players. Rizzo fits the mold of the tough, talented, respected, polished, powerful veteran presence despite being 25 years old. Bryant is t-minus a few hundred at bats away from exploding. I think he might have the biggest second half in the division. I wouldn’t be surprised if he went off the first month into the second half. The league will start challenging him now as it adjusts to the fact that Bryant takes his walks. You can’t pitch him expecting to get him to chase borderline strikes. He’s proven to be too patient. So, to adjust, I’d expect opponents to challenge him more in the second half at some point. That becomes even more probable if Rizzo continues to get on base in front of him. So as pleased as I am with these guys so far, there’s very good reason to believe that the second half holds more promise. They’re the type of players that get stronger as the season goes on.

4. Unfortunately, high praise for the offense begins and ends with Rizzo and Bryant. After those two, we’ve gotten steady production from Coghlan and, when healthy, Denorfia, but that’s really it. And even then, Coghlan and Denorfia have been pretty atrocious against left handed pitching. Soler hasn’t settled in like we hoped, mostly due to health issues and league umpires calling an inexplicably brutal fucking strike zone against him.  Fowler and Montero started hot but have since cooled big time. Then of course Starlin Castro is doing that thing where he plays well one month, sucks for the next 7-8 weeks, and then picks it back up again just in time to remind you that, despite a major dad bod, he still has elite hand eye coordination that will always allow him to hit. Problem for Castro is his complete lack of approach, which is why he falls in and out of slumps so easily. Speculation continues to build that he’ll be dealt, and now it seems sooner rather than later. But to now play devil’s advocate to my long standing and well documented Anti-Castro position, I’m wondering if Russell is ready to move over to short. He’s been ice cold lately, and looks baffled at times in the box. If we do move forward in dealing Castro, you’d hope Russell would build off the confidence such a move would bring with it. As of now, I’m not as sold on it as I’d like, especially with Castro coming off a break. Let’s see how he responds to the time off. That said, he and Russell need to pick up the proverbial slack big time.

5. We’re this good because our pitching staff is fucking legit. It’s been the pitching staff that’s carried us in our handful of big stretches. It’s been the staff that’s bailed us out of inconsistent offensive performances. And it’s been the staff that’s proved it can compete with anyone come October. A quick glance at some stats will prove why… at 1.15, we have the best WHIP in in the NL. That – that TEAM average statistic – would also rank as the 15th lowest WHIP of any qualified starting pitcher in the NL. The staff’s ability to limit baserunners is a product of surrendering a league low 7.9 hits per 9 innings while posting the second best K/9 rate at 8.6. Simply put, our staff is tough to hit. That’s pure Theo ball. Load up a bullpen with power arms, mix in some veterans, and run out a staff that can consistently pull off the 1 -1 -1 ratio (an above average starter should record the same number of innings-hits surrendered-strikeouts, otherwise known as a 1-1-1).

6. Arrieta is going to finish in the top 5 of the Cy Young voting. It’s pathetic he wasn’t an All Star. He gets better each time out. His stuff is unhittable at times. And it’s comforting to think that he’s really just into his 2nd full season as a cutter/slider guy. That’s the big change between the Baltimore Orioles Jake Arrieta and the one we have now. He’s pitching on a more diagonal plane across the strike zone whereas before, when he pitched horizontally with a 4-seamer and a 12-6 curve. He still has the curve, but doesn’t rely on it nearly as much as his cutter/slider hybrid. He picked it up when he came over for … wait for it … Scott Feldman (never gets old) in 2013 and hasn’t looked back since. Commanding that across the strike zone has thus allowed him to pitch more aggressively with his sinker, and the result is a budding Ace really hitting his stride.

7. Jon Lester has turned in some big games for us so far. He had a brutal April then a monster May. A shitty June and now a dominant July. It’s back and forth, up and down, frustrating as all hell, whatever you want to call it. But it’s also sneaky encouraging that we have him at the top of our rotation to take us into the second half of the season. He’s a big moment, big game guy. We are heading into that direction pretty quickly, and I’m looking forward to seeing him take the ball on a Friday night in August. Then we can start talking about whether or not he’s worth the $155 million. Until then, let’s bide our time and enjoy the fact that Jason Hammel has been one of 2015’s biggest surprises. Hammel’s posted a 2.86 ERA and a .94 WHIP while holding opposing hitters to a .206 average. Those rank 11th, 5th and 6th in the NL respectively, and he’s probably going to end our season as our #4. Theo you dog!

8. Our bullpen was a big question mark two months ago. We were freaking out that we had no reliable lefties, no Neil Ramirez, an erratic closer in Rondon and Pedro Strop was getting overused. Fast forward and our bullpen has been the unequivocal strength over the past 6 weeks. Justin Grimm has been flat out ELECTRIC while the ghost of James Russell has figured its way back into an effective specialist role. Couple that with the return of Neil Ramirez and his power breaking ball and the resurgence of Jason Motte as a shut down closer and you have yourself a pretty solid pen. Heading forward, you’d like to see Motte sharpen up his breaking ball a bit to get his strikeout count up. And while we’re filling out the wish list, it would be nice to grab another veteran lefty from the bottom of the standings that can make an immediate impact at the end of games. Someone that we can comfortably bring in to face Heyward and Carpetner without immediately assuming the worst.

9. Finally, I think the front office is working night and day to get a package together for another starting pitcher. The internet rumor mill has been spitting James Shields’ name around for Castro. I’m in on that but only if we can swing David Price in the offseason for sure. If that impedes our chances at getting Price, then fuck it. If, on the otherhand and like I suspect, we do have the capacity to get James Shields then you bet your fucking ass we go after him. That guy has been lights out so far, and is showing no signs of slowing down. Chalk it up to his obsessive work ethic or his near perfect, efficient mechanics or his simple fastball/changeup combo that reduces the overall stress on your shoulder and elbow. Chalk it up to whatever you want, but James Shields can pitch. And if the Padres think Castro and his contract are worth the switch then I’ve got a bridge I’m trying to sell too. And if it isn’t Shields then it’s mid-tier 3/4 guy that would pitch in our 5 spot behind Hendricks. I’m not naming names but Jonathan Niese is what you’d be looking at, which kinda sucks to think about right after I sold you on James Shields. But I think Niese would be a decent fit.

In any event, we’re looking good. Much better than the White Sox. That’s for sure. Now bring me October.