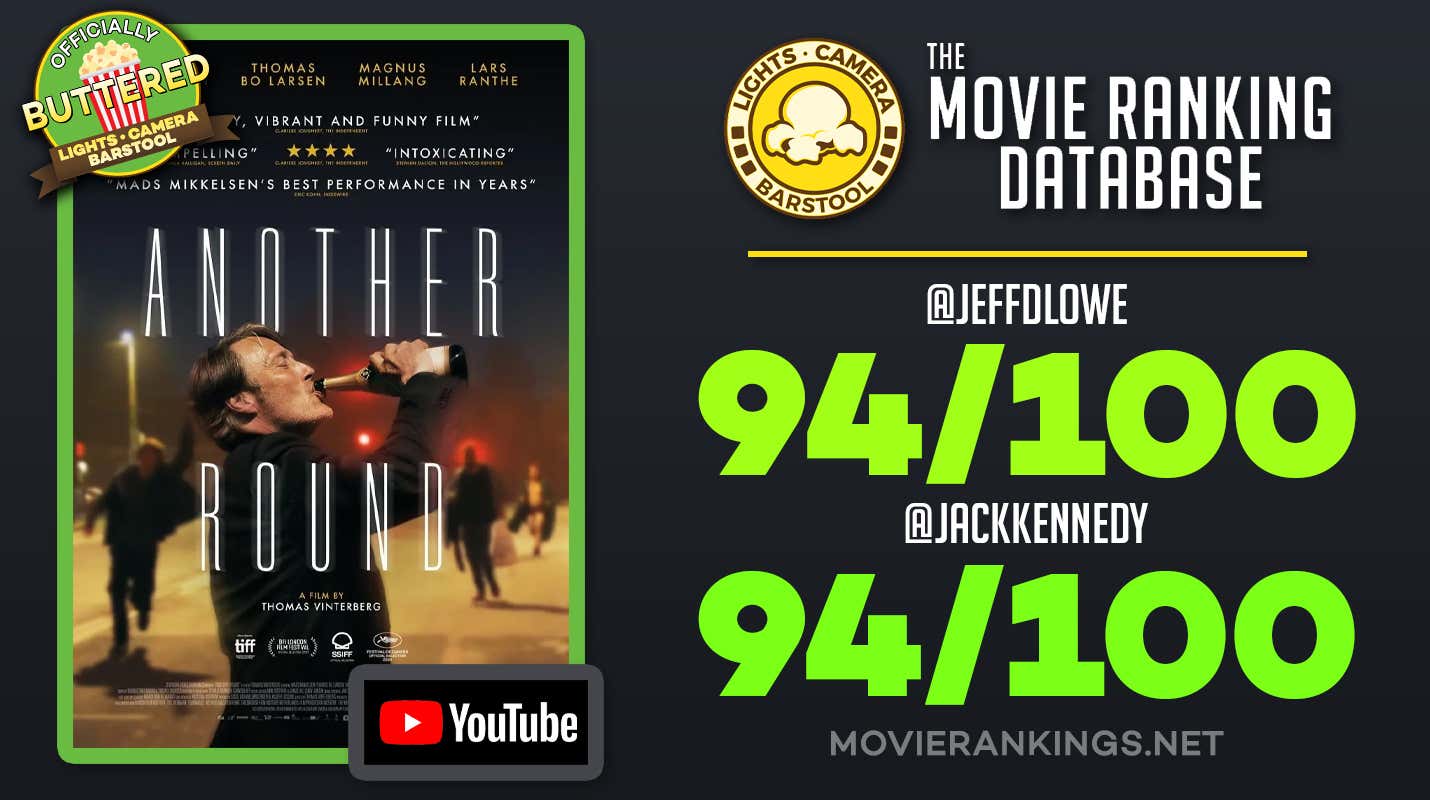 We reviewed one of the year's best movies (Danish movie, subtitles required) on our podcast, Lights Camera Barstool...

...we also put some words on paper, as well.

A lone scientist in the Arctic races to contact a crew of astronauts returning home to a mysterious global catastrophe.  (via Wikipedia)

JeffDLowe (94/100): A movie about the "awakening of life," 'Another Round' is yet again a fantastic release from director Thomas Vinterberg and one the best movies of 2020. Led by the incredible Mads Mikkelsen, this Danish release is an incredibly thoughtful, and emotional look at the balancing act that comes with family, friends, work, drinking, self-confidence, and so much more.

Already a great movie on its own, 'Another Round' (known as 'Druk' internationally, which roughly translates in Danish to "binge drinking) only carries more weight when you know the story behind its production.

The story was originally "A celebration of alcohol based on the thesis that world history would have been different without alcohol". However, four days into filming, Ida was killed in a car accident. Following the tragedy, the script was reworked to become more life affirming "It should not just be about drinking. It was about being awakened to life", stated Vinterberg. Tobias Lindholm served as director in the week following the accident. The film was dedicated to her, and was partially filmed in her classroom with her classmates. (via Wikipedia)

I just simply can't imagine carrying on and making the movie, but you can truly see Vinterberg's heart in the story, from start to finish. There truly is no better way to describe it than an "awakening of life," and it is done so in a very relatable way. Who hasn't dealt with a lack of confidence, using less-than-desirable outlets to fix those issues? Who hasn't had issues with family, friends, or finding moderation, and a perfect balance in life? 'Another Round' isn't a movie so deep that it requires multiple viewings to find the larger message, but the ability for its story to feel so grounded and relatable is why it works.

And while the ending may be a tad ambiguous in terms of character specifics, there is one obvious answer: this movie has one of the best, most enjoyable ending scenes you will ever see!

Going further into the movie would spoil too much, but trust me when I say that 'Another Round' is a movie you'll want to watch again once it is over. Sometimes the movies with the more simple plots and stories leave the strongest impact.

KenJac (94/100): There are a ton of movies that try to do the “middle-aged guys getting together for one last hurrah” thing, but most of the time they’re just goofball comedies. This movie, however, takes that goofy premise and turns it into this genre-fluid, earnest story that is both ridiculous and sort of serious. It gives you a deep dive into the drinking culture within Denmark, which is much different than our own, while also exploring problems that are familiar to us like alcoholism.

It is wonderfully acted across the board and looks beautifully rustic. It has that distinct euro look to it while also feeling as if it could be Anytown USA. I think that is honestly the best feature of this movie. So much of it feels familiar yet different at the same time which is a hard feeling to describe. The one word I am confident describing this movie as, though, is GOOD. This is a good-ass movie, and my second favorite of the year so far. It’s hard to write out but I’d suggest listening to our full pod for my expanded thoughts.

--
The movie is Officially Buttered, with high scores from myself and KenJac. You can head to Lights Camera Barstool right here to listen to our latest episode where we reviewed the movie and also interviewed Michael Chiklis.