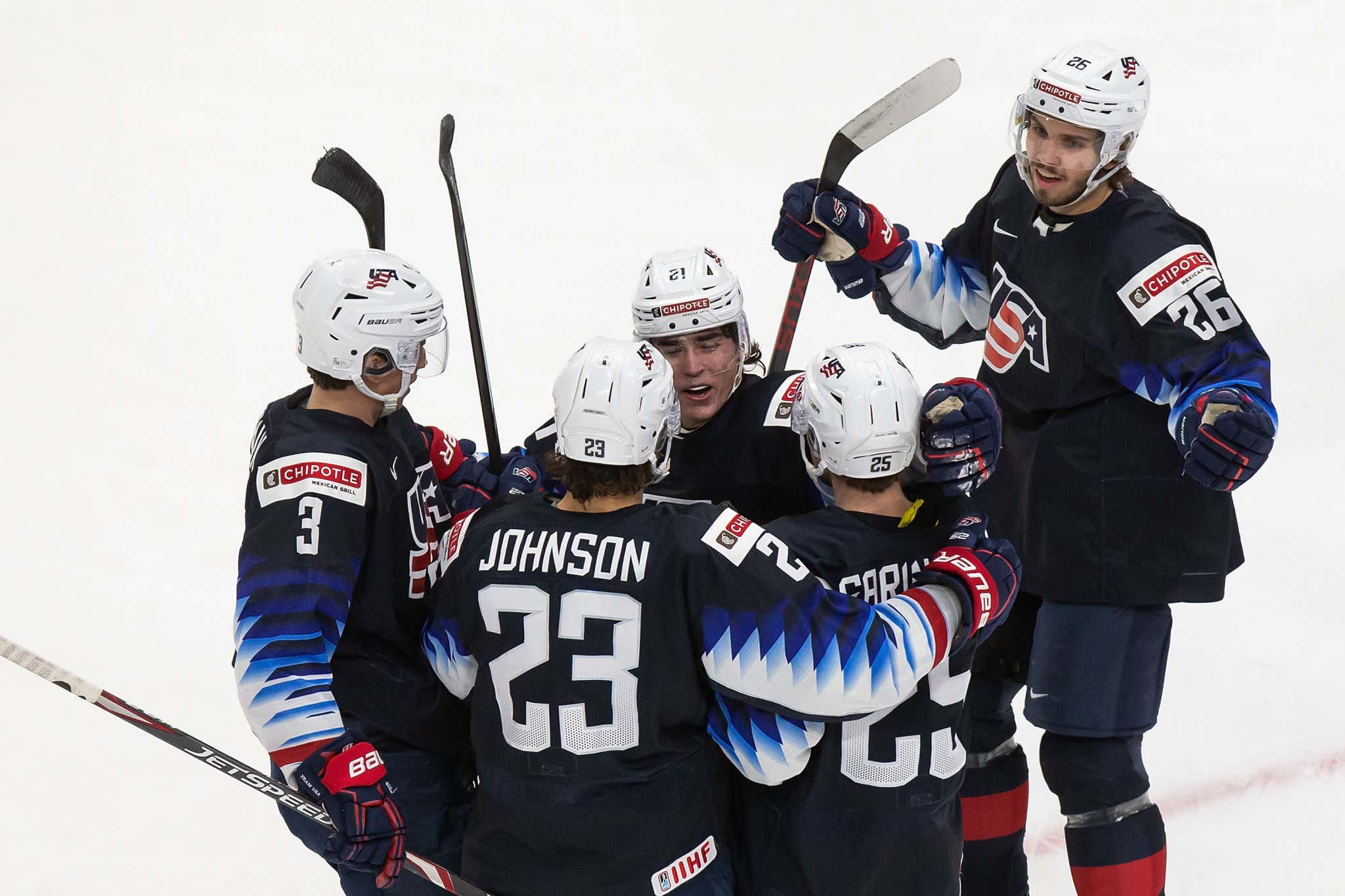 Who: USA vs Finland

Let's hit the rewind button real quick and head back to January 5, 2019. Just about 2 full years ago to the day. We had projected 1st overall draft pick Jack Hughes and the United States men's junior national hockey team taking own the projected 2nd overall draft pick Kaapo Kakko and Finland in the gold medal game.

Finland went up 2-0 in the 3rd period, Team USA battled back to tie things up, but just as it looked like the game was destined for overtime…Kaapo Kakko delivered the final dagger to win gold for Team Finland with under 90 seconds left on the clock.

This year's matchup isn't for gold, but a chance to play for gold. And even though Kaapo Kakko and Jack Hughes could both still be playing in this year's tournament, neither made the trip to Edmonton. So who will be the stallions leading both of these teams to glory?

Team USA has to keep riding Trevor Zegras (ANA). He leads the tournament in points with 6 goals and 9 assists in 5 games. This kid is on an unreal pace, which you need in a short tournament like the World Juniors. And that top powerplay unit in general has been pretty lethal. Matt Boldy (MIN) has 4 goals in 5 games, and Cole Caufield (MTL) might just have his shot dialed in.

Between the pipes, Spencer Knight (FLA) has really turned things around since that first game against Russia. Even after giving up 4 goals against Russia, his GAA is under 2 for the tournament and has the 2nd best save percentage in the tournament. Between Knight and Wolf, Team USA went just about 219 minutes straight without giving up a goal in this tournament. 3 straight shutouts to close out the preliminary round, and then Slovakia didn't score until the 2nd period of the quarterfinals. So yeah, I'd recommend continuing to run the "be really fucking good in net" play that Team USA has been using.

Well all things go through Anton Lundell (FLA). He's had a "quiet" 4 goals and 3 assists through 5 games so far. But I'd say he is hands down one of the best goal scorers in this tournament. And he's also one of those players who Finland can count on to show up when they need him the most. So if USA gets out to a lead in this game, it'll only make him more dangerous.

And as far as defensemen who can get up and down the ice and dominate both ends go, Ville Heinola (WPG) is one of the best. Lundell and Heinola were both on that 2019 team that won gold, so they know a thing or two about beating Team USA in the medal rounds. They're two of the oldest on the team, but the youngest is also one of the most dangerous in my opinion. It wouldn't surprise me at all to see Brad Lambert (2022 Draft) get himself on the scoresheet tonight. Kids got a laser.

So yeah. Fire power on both teams. Great 2-way defensemen on both teams. And really strong goaltending on both teams. Should be one heck of a men's competitive ice hockey game we have on our hands here tonight. Pitter patter, let's get at 'er. Live Blog officially activated.

(Make sure to follow along on Twitter @JordieBarstool for live updates/highlights. I'll be back to update the blog between each period)

No goals through the first half of the 1st period so far, but if this is any indication then we are in for a signature Trevor Zegras night.

Obviously didn't end up in the back of the net but Zesus is clearly feeling himself in this tournament. If this is what we're getting out of him in the 1st period, he's going to get even saucier as the night rolls on. Buckle up, folks.

It's been a pretty back-and-forth period for the most part. Both teams getting some decent possession in the offensive zone. Both teams getting pucks on net. And both teams decided to trade a pair of goals. First up it was Alex Turcotte getting Team USA on the board after getting nice and greasy in front of the net.

That's some blue collar, hard dick hockey. Just what we've come to expect out of Team USA. But then the Finns went on the powerplay a couple minutes later. And after some nasty puck movement on the PP, Kasper Simontaival tied things up.

Tough to see the lead go so early, but plenty of hockey to go. 40 minutes, to be exact.

The thing about hockey is that it quite literally takes one shot to completely change a game. The 2nd period had been pretty brutal for Team USA. The ice looked tilted for Finland after USA ended up on the penalty kill again. Even after the penalty was over, the Finns were getting a ton of pressure, getting a ton of great shots, and luckily Spencer Knight was up for the test. Finland was clearly controlling the period and then…

Jackson LaCombe snaps a beautiful lead pass to John Farinacci, and Farinacci buries it to give Team USA the lead. He had 2 goals in the quarterfinal game against Slovakia, and he keeps the hot stick going here.

Then almost immediately after that Farinacci goal, Matt Boldy drew a 4-minute double minor penalty after taking a stick to the eye. And on the ensuing powerplay?

Boldy deflects this Trevor Zegras shot to the back of the net. Just like that, it's a 3-1 game. Love to see the boys taking advantage of opportunities. That's how you win championships.

Let's go now, boys. 20 minutes to go. Finish strong. We have a date with the Canadians tomorrow night. Hold on.

Well you had to know that Finland was going to come out completely gassed up to start the 3rd period. And USA did a great job at handling all the pressure for the first 12 minutes of this period. Bend don't break, bend don't break, and then bend don't break some more. But you knew it was only a matter of time before the Finns broke through again with how much pressure they were applying. And a little over halfway through the period, Kasper Simontaival got his 2nd goal of the night to make this a 1-goal game.

Get ready for a wild finish here, boys and girls. Pun only somewhat intended.

Well…..fuck. Fuck fuck fuck. After the US took their SECOND delay of game penalty in the 3rd period, the Finns tie this game up on the powerplay with under 4 minutes to go in regulation.

If you let Anton Lundell hang around for too long and give him enough chances, he's going to make something happen. And after getting the puck to the front of the net, Roni Hirvonen puts it away for the tie. Goddammit.

Still plenty of hockey left. But that hurts.

Holy shit. What a snipe. What a player. What a game. What a tape job! 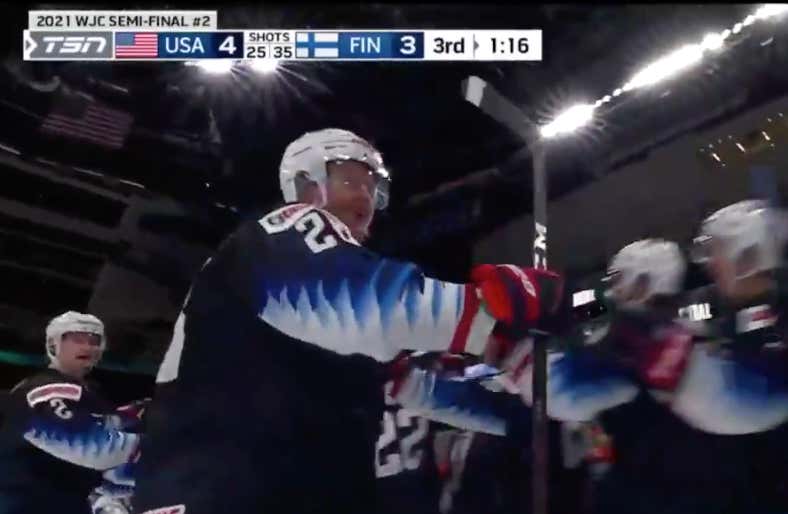 What an insane period of men's competitive ice hockey. Also what an insane game for the LA Kings prospect pool. Kaliyev with the game winner. Simontaival with 2 goal. Turcotte on the board. It's a decent night to be a fan of the Kings, and it's an even better night to be an American. Fuckin right, boys.

Destiny awaits tomorrow night. A Border War with the Canadians, who basically had the night off tonight after speedbagging the Russians 5-0. Should be another classic. Can't wait.