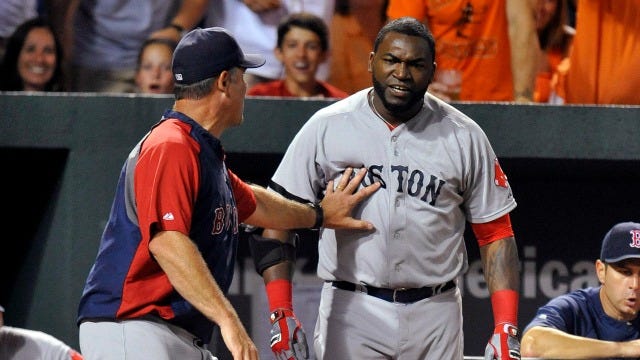 SOURCE – David Ortiz has lined up at first base in two of the Boston Red Sox’s last three games, and the results have been positive. The Red Sox have won both, and Ortiz has fielded his position without incident. So, does that mean the 39-year-old designated hitter is up for flashing the leather on a more regular basis? Um, not exactly.

*PART OF THE QUOTE EVERYONE HAS BEEN REPEATING*: “Hell no,” Ortiz told reporters after Wednesday’s 6-3 win over the Miami Marlins, via the Boston Herald. “I’m too old for that, man. I like doing my focus on hitting. I haven’t played first base in too long.”

*PART OF THE QUOTE EVERYONE HAS IGNORED*: “I know that these past couple of days, they want to make the lineup look different or whatever, but I know my boy (Napoli) is going to bounce back and do what he normally does. It’s just a matter of time.”

It’s right around the All-Star break and you know what that means: it’s time for Papi to say something that talk show hosts can babble about for 4 hours because there’s nothing else going on in the sports world! It’s an exciting time if you love asinine conversation that makes you want to blow your brains out.

Anyways, the quote du jour is above and can be summed up thusly: David Ortiz doesn’t want to play first base because he’s too old and that’s not what he gets paid to do. According to most media outlets that’s the full story. It’s just another example of Ortiz being a selfish diva. He’s not willing to do what’s best for the team to win. He should be more like Pedroia. He’s a bad teammate and he sets bad examples for the young guys coming up. Blah, blah, blah; blah, blah. Blah, blah,blah. It gets old.

The second part of the quote, also noted above, is what’s hardly been mentioned. You know, the part where he’s being fantastically supportive of a teammate who’s having the toughest season of his career and doesn’t need to be kicked in the ribs when the buzzards are already circling. I love that quote. Regardless of whether Napoli can play anymore, he’s going to be the hardest on himself for his failures; Ortiz playing the supportive role is exactly what he needs to do.

If you don’t like how he got there, fine (even though the first part of the quote is 100% accurate also).But for all the diva talk and everybody bitching and moaning about the speed of his home run trots, he still seems to be pretty popular in the clubhouse and around the league among teams that can outdraw the Sea Dogs (hi Tampa!). Most importantly as a fan, would you ever accuse him of not competing? When was the last time he had a Manny Ramirez or Hanley Ramirez at-bat where he just decides to stand there, watch three strikes, and go back to the dugout because he doesn’t feel like it right then?

He’s gotten more curmudgeonly with the media. He’s more outspoken at 39 then he was at 29. He can be a bit of a cocky asshole. Good. If he feels he’s earned that right it’s because he has. But he’s also still out there competing and he’s still out there producing at a high level.

“Producing? He’s hitting .230 with the lowest OPS of his career!” Yes, he had an atrocious first two months. Since the calendar flipped to June, however, he’s turned it around to the tune of an .861 OPS despite a .239 batting average that’s marred by a .218 average on balls in play (BAbip). Sure part of that is teams shifting more than ever, but even his BAbip to start the year when he couldn’t hit anything was higher than that at .235 and on average the last three years it’s been .296. He’s hitting the ball harder (.513 slugging, .274 isolated power) and he hasn’t really even begun to find holes yet.

For comparison, Xander has obviously turned it on since the start of June as well: his .338/.361/.460 slash line (bolstered by an unsustainable .400 BAbip) gives him an OPS of .822 over that span; that’s 39 points less than Ortiz. The excitement about Xander’s breakout is that he’s 22, has all the skill in the world, and we can see him building towards becoming something special; just because Ortiz is an old man by the sporting world’s standards doesn’t mean that he’s any less important to the Red Sox success or failure in 2015.

People who want to make the story about Ortiz being selfish will do so no matter what. Maybe I’m biased by Ortiz delivering three titles, 423 home runs, and countless memories to the city of Boston, but I just don’t see it that way. 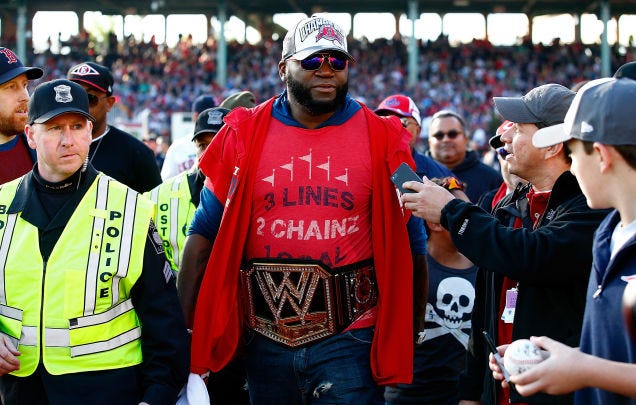