Tell me someone, anyone, who has a better life right now than Gronk? You can’t. Gronk is living it up, having the time of his life this offseason and I can’t blame him. You just won the Super Bowl. You play for the best franchise in sports. You have more money than you could ever want. Endorsement deals keep coming in faster than touchdowns against the Colts in the playoffs. Probably the best offseason of all time.

So what do you do when you have a legendary offseason? Plan for the next one, duh. Such a power move by Gronk here. You have to respect Gronk’s decision not to drag out this process and handle this now. I mean this is the same as a contract extension. Don’t want to have to worry about this shit during the season, so get it over with now so you can keep your mind on football, not business. Class act move from a class act guy.

I mean this is a no brainer. What do you think Gronk wants to do after he wins Super Bowl 50? Get on a giant cruise ship with a bunch of smokes and party. Making all that money is just a throw in for Gronk. Having it on February 19th gives him the perfect amount of time to go to the Super Bowl Parade, party it up and make TV appearances. Gronk is just doing it bigger than anyone else right now. Stay Hyped, Get Chicks.

PS- I’m not saying that Gronk is copying us or anything, but you know that whole “great minds think alike thing”? 100% accurate right now.  (Buy Tickets Here) 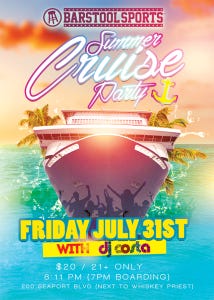