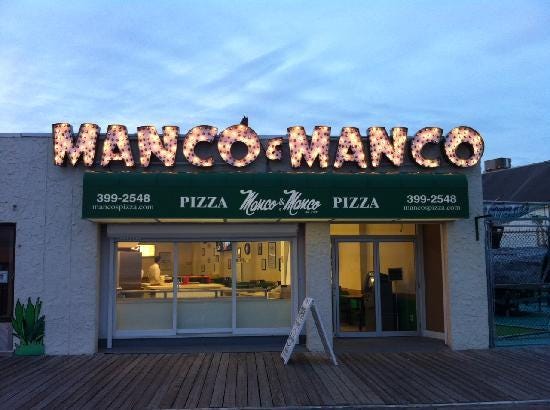 OC - For Charles and Mary Bangle, the pizza business meant big dough. The husband-and-wife owners of the Manco & Manco Pizza restaurants, landmarks on the Ocean City, N.J., boardwalk for decades, traveled the country, bought custom clothing, and often had wine shipped from California. According to prosecutors, that lifestyle was funded by hundreds of thousands of dollars skimmed from their own cash registers. On Thursday, Charles Bangle, 55, pleaded guilty to tax evasion in federal court in Camden. Mary Bangle, 54, pleaded guilty to lying to IRS agents when they questioned her. “It’s a good business they have, and they’re good people,” he said. “There were some errors in judgment.”

This happened a couple days ago but I was officially off the grid so I somehow missed it. But errors in judgement is an understatement and a half for these guido bastards.

First of all, it’s Mack & Manco. I didn’t acknowledged the change a couple years ago and, dammit, I never will. Secondly, no shit they were skimming off the top. What else is the point of owning a pizza place? Especially when you’re Italiano that runs a cash only business.

At Mack & Manco there was always that little green box up front since the beginning of time. Damn thing is always filled with bills. Of course that money was going off the books and into the pockets, and everyone knew and accepted that fact. So if they shut down one of the shore’s most iconic and delicious spots for something that has been assumed since the ’50’s it’s a crime against shore ethics. What’s next, they’re going to close Uncle Bill’s for hiring hot underage summer waitresses off the books or ban the Malvern Prep and SJP doucheticklers cause they’re pretending to be play tough guys on the boardwalk? Do the right thing, Jersey. They admitted fault, so make them pay up and keep the dough flowing. Also, time to wet Ocean City while we’re at it. Enough of this dry, prohibition era “family atmosphere” horseshit. Nothing worse than arriving in OC and realizing you forgot to stop in Somer’s Point to get the booze.

Mack & Manco in OC is great but it can’t even tickle the saucy sac of Mack’s on 83rd in Stone Harbor. Best slice you are going to get in South Jersey and possibly the world. BY FAR best pie I’ve ever had.