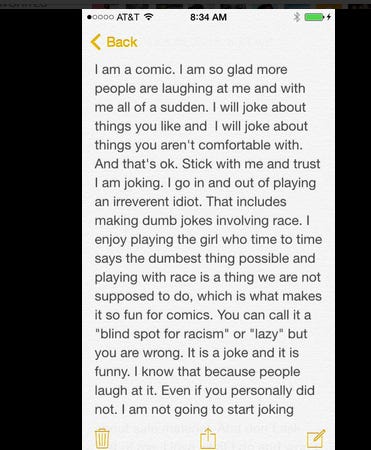 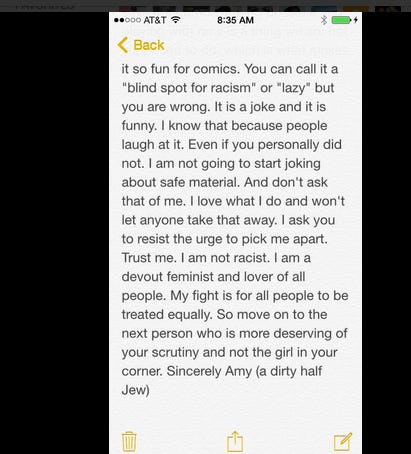 Mashable - Twitter users Martine Joelle and Feminista Jones called out the comedian for telling this joke: “I used to date Hispanic guys, but now I prefer consensual.” Schumer, who stars in the sketch series Inside Amy Schumer, responded to Joelle’s tweet with a message of her own, explaining that she wrote the joke two years ago, and has since stopped telling it. “Once I realized I had more eyes and ears on me and had an influence I stopped telling jokes like that onstage,” she writes.

Stop me if you’ve heard this one before, outrage in the streets about a joke a comedian told. It’s Bananaland, USA. It’s every day now. “Comedian tells joke, the group the joke is targeted at cries about it”. It’s so ridiculous. Comedians are paid to make fun of people. Some people enjoy that type of comedy. If you don’t like that type of comedy, you don’t pay to see that comic, it’s really that simple. But yet people will go out of their way and spend time to hurt a comedian’s career because they don’t like a certain joke. It’s baffling. And that joke wasn’t even that bad. Feel like I’ve heard 100 different comedians tell wayyyyy more racist jokes, to sold out audiences. But it’s the new normal. Fuck, people read THIS site, this fucking site, and get offended at the simplest jokes. It’s insane to me that people read this site as if we are the New York Times and take everything we say at face value, but some people just can’t handle jokes. It’s crazy. I wish we could just all agree to stop getting offended by jokes. Comedians are paid to make them. Has to be so frustrating to be a comedian and have to walk on eggshells because you don’t want the PC police breaking down your door if you say one slightly racist joke.