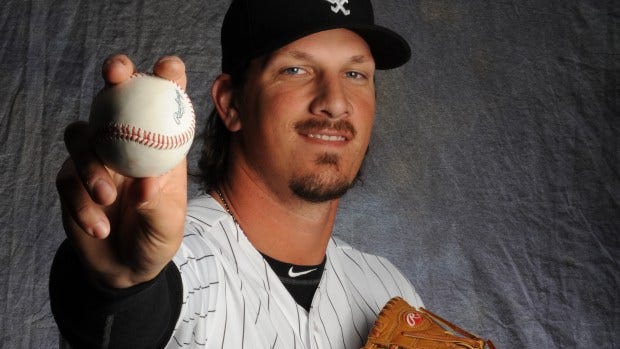 We will get into this more in depth in the blog, but Major League Baseball currently finds itself in the middle of one of the best sellers’ markets in a long, long time.  Out of 15 teams in the American League, 14 have between 41-49 wins.  Anyone could choose to sell assets and build for 2016 and beyond, and anyone could choose to say fuck it, buy assets, and make a run at either wild card spot or their respective division titles. The next 16 days are going to be flat out wild on the trade front.

The focus of this blog, of course, will be how the White Sox plan on handling Jeff Samardzija from now until the July 31st trade deadline.  Shark projects to start three games prior to the deadline.  There were reportedly scouts from as many as 14 teams at Shark’s last start, a complete game shutout against Toronto.  He’s currently riding his best stretch as a South Sider, and the White Sox will undoubtedly entertain offers from teams across the league.

For the blog, I had a little back and forth with White Sox insider Brian Bilek. Brian will go into how the Sox and Shark got to where they are today, and what could potentially happen with Jeff Samardzija from now until the deadline.  It will be a great read for Sox fans and fans of teams who may be looking to add either at or before the deadline, so it will be broken down into multiple parts.  Let’s go!

Dave: Shark gambled on himself last year by turning down a contract extension with the Cubs.  So far to date with the Sox, he has not pitched completely as we had hoped, though he his last month has been great.  Is he winning this gamble so far?

Brian: Last June, Jon Morosi reported that Theo Epstein and Co. offered Samardzija what was believed to be in the neighborhood of a 5-year 85 million contract. Barring an injury, it’s safe to assume Samardzija will blow past that 85 million dollar mark and more than likely sign a nine-digit contract this offseason. At the very least, Shark should best that 17 million AAV the Cubs were reported to have offered.

Samardzija hasn’t been the latter half of the 1-2 Sale-Samardzija punch that some outlets were expecting but he has pitched well enough to hold his reputation as a strong #2 starter. A 4.02 ERA is not sexy in today’s game by any means but it’s certainly not an end-all, be-all stat given that the White Sox have the MLB’s worst defense. His 3.41 FIP and ~3.5 fWAR pace shows that he’s still a pitcher that you can bring into your playoff rotation and feel confident. If fWAR is your stat of choice, Samardzija has been better than guys likes Madison Bumgarner and Chris Archer since the start of the 2014 season.

When Rick Hahn teamed up Athletics’ Assistant General Manager David Forst to acquire Jeff Samardzija, it was not the all-in move that many pundits reported it to be for the Sox. The Sox had three scenarios that insulated the team with risk version. Ideally, they ended up in contention and they would have Samardzija as their #2. If they were in contention and kept the righty through the season, they could either sign him long term, or reap the benefits of a potential qualifying offer that would extend the Sox ample draft flexibility. If the team were to fall out of contention, they would have the option to sell him in a more fluid market than the market they acquired him in. The last scenario is very likely the one we will see come into fruition over the next two weeks.

Dave: Outside of Cole Hamels, Johnny Cueto and now that Detroit might be sellers David Price, Shark is one of the most in demand “rentals” who is seemingly available.  What type of prospect would Shark command in a trade?  Would the Sox aim for depth or star power?

Brian: The best way to gauge Shark’s true value is by looking at similar trades and the returns they yielded. I should note there is certainly a lot moving parts when looking at these trades in retrospect but these are the most comparable free-agent-starting-pitchers-to-be who were traded in the past few July’s:

Looking at the Garza trade first, this was, by most viable sources, considered an overpay by Texas’ GM Jon Daniels but Samardzija is likely to have a bit more value than Garza had anyways. Cubs got a top 50-ish prospect with injury concerns in Edwards, a complete wild card and former blue chip prospect in Olt and two intriguing arms that figured to come out of the bullpen. If the Sox wanted to go in the direction of depth this is a decent template.

The Greinke trade, and to be clear, this was Zack Greinke before he encapsulated his brilliance with the Dodgers, netted the Brewers the Angels #2, #4 and #9 prospects in what was a pretty “meh” farm system.

As for the Sanchez trade, it’s almost too convoluted to put any credence in the return but Miami did get a consensus top 25 prospect in Turner and a left-handed hitting catcher thriving in AA.

Dave: Go with your gut – do the Sox move Shark in the next two weeks, yes or no?

Brian: Yes – I think they do. The team has certainly made it difficult on management having won four series in a row against good competition in the Cardinals, Orioles, Blue Jays and Cubs. The fact of the matter is the Sox are only 5.5 games back of the second Wild Card spot but it’s disingenuous to act as if they only have to outperform the Astros by 5.5 games over the next two-and-a-half months. In reality, there are six teams they have to outperform and these teams don’t share the same holes at C, SS, 2B and 3B that the Sox are hindered by. The Sox definitely have a huge strength in their #1-#4 starters, but I am not sure it’s enough to overshadow an anemic offense and better, but still below-average defense.

When I spoke with Rick Hahn in April, there was a prevailing point when he stressed on the importance of depth. Hahn said, “We hope that by this time next year (i.e. April 2016), we will have the depth to be insulated to compete for a full 162 game season.” Without a doubt he was alluding to players like Carlos Rodon, Frankie Montas, the #8 pick (now known as Carson Fulmer) and other positional players graduating to the upper ranks of the organization, but that definitely doesn’t mean he was satisfied with the internal depth the Sox have. Simply acting like a contender isn’t going to help this team in their three-year plan. There’s a scenario where they hold onto Samardzija, and the team may very well force management’s hand over the next two weeks, but I am not sure it’s the best outcome for the organization in the long term.

I’d say that’s a pretty good breakdown of the current state of Samardzija and the White Sox.  Inside info, meet Barstool.  In part two we will go into hypothetical trade proposals for Shark.  Part two will come out tomorrow, so if you are a Sox fan or a fan of another team that may be interested in acquiring Shark’s services, feel free to fire away at us on twitter. We will answer the Twitter questions in part three.