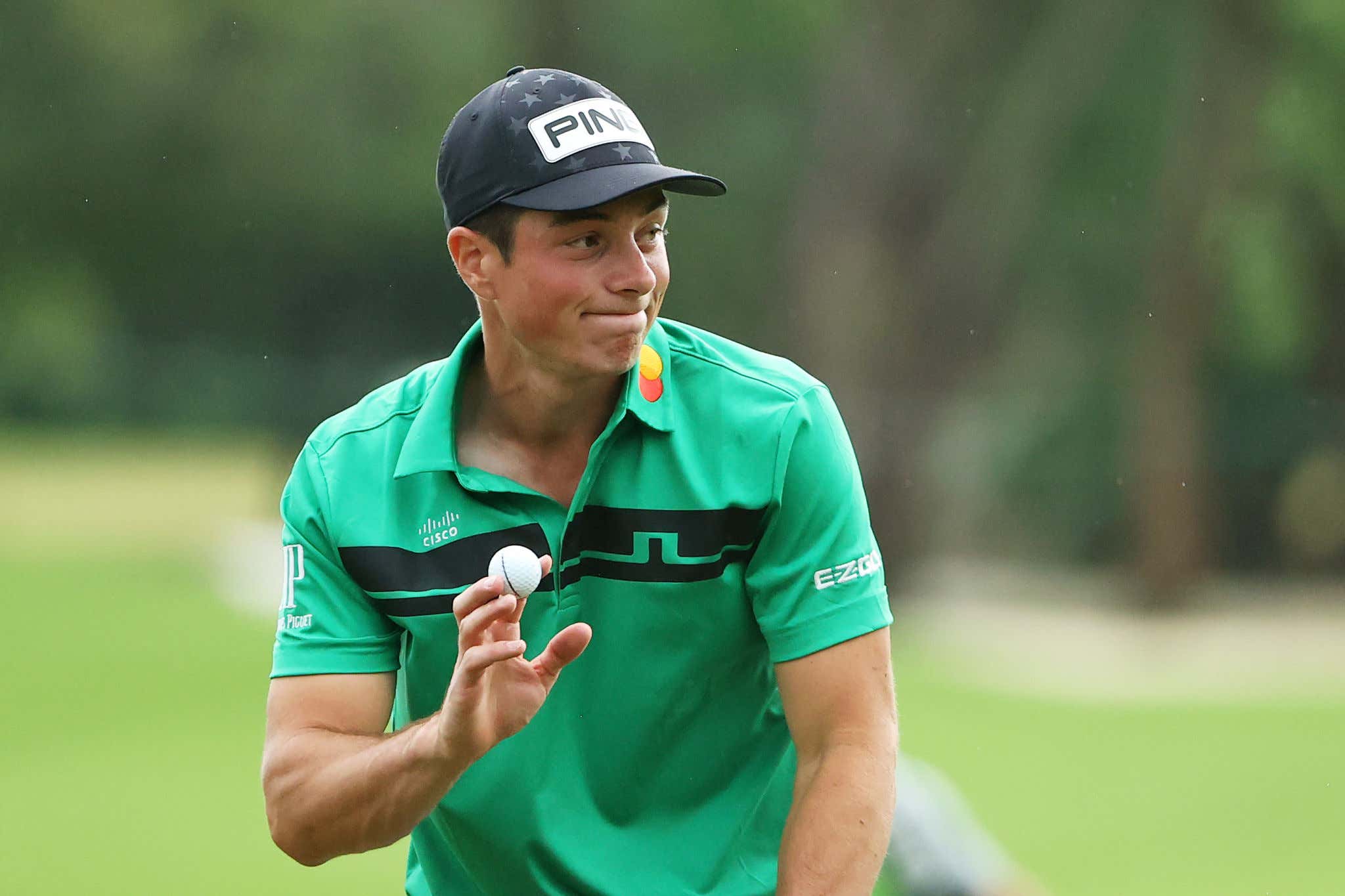 Big time nails by Viktor Hovland to bury a 10-footer to win on what was a hectic Sunday at the Mayakoba. There were about a dozen guys within 2 strokes of the lead for most of Sunday playing a golf course that was as wet and scoreable as can be. Guys were going low and bringing the pressure all day and the Hov hung in there tough to get it done. I thought this up and down on 16 on a long bunker shot was a great example of that where he could have relinquished the co-lead but didn't.

Casual golf fans might not realize just how tough that shot is. After burying the putt, he was able to stay in a co-lead with Aaron Wise. Wise would go on to close out a final round 63 moments later and set the stage for Hovland. The mission was simple. Birdie 18 and the tournament was his. After a drive in the first cut and this wedge to 10 feet, it was over.

This marks Hovland's 2nd career win on Tour, after winning the Puerto Rico Open in 2019. Hovland turned pro shortly before that W and was part of a young trio who turned pro after their 2019 college seasons had ended. Of the trio of Hovland, Matthew Wolff, and Collin Morikawa, Viktor was considered by most to be the best of the group. He's certainly played well so far early in his career and has worked himself inside the World Top 20, but a lot of attention has been drawn away from him because of larger successes by Morikawa and Wolff.

This win throws some fuel back on that fire so to speak. Morikawa obviously has the upper hand having won 3 times including a major, but Hovland and Wolff are probably neck and neck at this point. Hovland has 2 wins to Wolff's 1, but Wolff has made a lot of noise in majors and has 3 runner-ups in 2020. These three will be compared for a long time, and they've got a lot of great golf in their future. Excited to see it unfold.

The Final Leaderboard and Other Storylines 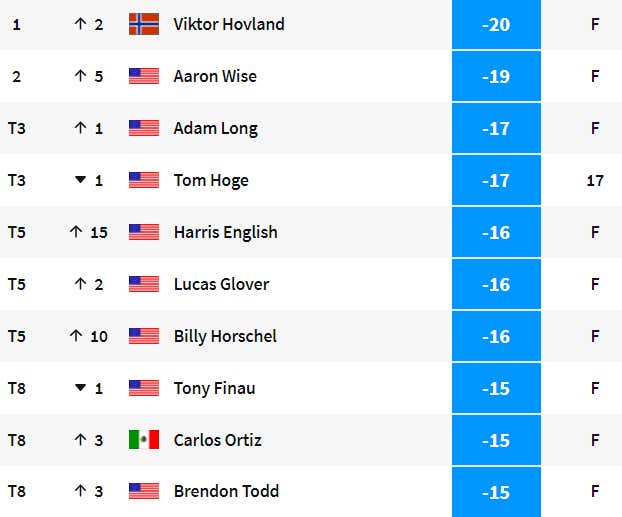 Emiliano Grillo held control for much of this tournament after having a 4 shot lead thru 36 holes and a 1 stroke lead through 54. He had played extraordinary golf at El Chamaleon having gone par or better in all 19 of his career rounds there before suddenly dropping a +1 round of 72 on Sunday. What's worse is that this was an extremely scoreable golf course today where everybody else on the front page of the leaderboard went low. Missed opportunity, and a horrible time to end a streak.

Tony Finau also had this tournament in his crosshairs as he was on near the top of the leaderboard all week and even shared the lead at points during Friday and Saturday. But he too faltered on Sunday after climbing to within a stroke on the front 9 Sunday. He made a couple of unforced errors by hitting balls into penalty areas. Can't do that on a course this benign. This marks his 41st career Top 10 since joining the Tour in 2015…. for which he still only has 1 win to show for. And that was at the 2016 Puerto Rico Open, an alternate field event while the world's best were busy playing the WGC Match Play. You don't just fall backwards into 41 Top 10's. There's probably only a dozen guys who can say they've accomplished that over the past 5 years. He's gotta break through with another win at some point, right?… RIGHT?

Rickie Fowler missed the cut again, all but assuring himself of being outside the OWGR Top 50 at year end. That leaves him without a Masters ticket punched, which is a crazy thought for one of golf's best players over the past decade. He can obviously still punch a ticket, but he's running out of options. At this point, he's either got to find a way to win a tournament between now and the Match Play in late March, or simply play consistently enough and well enough over the next 3 months to secure a position in the OWGR Top 50 at March 29th, 2021. Plenty of golf left, but he's gotta turn it around quickly if he wants to stockpile enough good results to get the job done. Rooting for ya Rick.

Shot of the Week - Brendan Steele, Albatross on the Par 5 13th

Brendan Steele was a non-entity this week and really didn't even sniff the cut, but any time you pick up 3 strokes against par on a hole, you're going to take this spot. You can usually count on 1 hand how many of these things you see every year. Great shot.

Honorable mention: Tony Finau with an ace on Friday. Kudos to him for keeping his emotions and more importantly his ankles in check.

This pretty much concludes all PGA Tour golf that matters in 2020. We've got Chuck and the Cat at the Father-Son Challenge in a couple of weeks, but events that count towards the FedEx Cup and OWGR points pick up next month in Hawaii at the Sentry Tournament of Champions. Til next time.