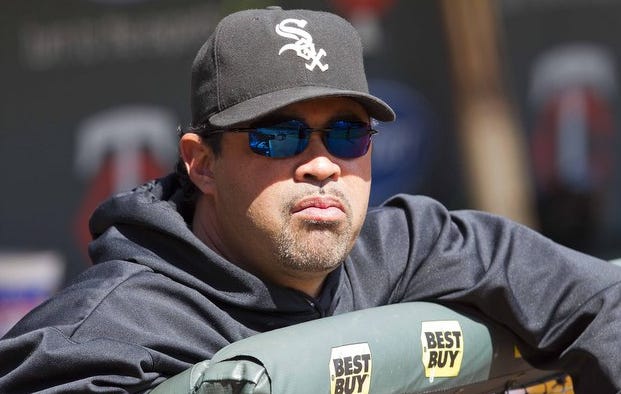 (Source) Here’s the far-fetched proposal facing the White Sox: Ozzie Guillen wants to manage. The same crazy No. 13 who could delight you one minute, then drive you nuts the next 59. Ken Williams has gnawing reservations — and for good reason. An organization once the pride of the ever-flashy Bill Veeck was reimagined under the dangerously misguided notion in a two-team town of gliding quietly under the radar. Chairman Jerry Reinsforf loves his Ozzie but treasures his peace more. No way the Sox seriously consider Guillen. That was the thinking in 2003.

But the Sox threw their conventional wisdom out the window and made a bold move that paid the largest reward. So why not do it again? Robin Ventura occupies the job now. That’s the best you can say about Ventura as a manager: He occupies the job. He was a terrific player and remains a genuinely likable guy. As a major-league manager, though, he’s mostly occupying a spot. That’s not his fault. It’s what the Sox ordered up after Guillen’s first run. Flying under the radar once suited the Sox’ need for tranquility. Then general manager Rick Hahn veered from the sleepy script last winter and put the Sox in the middle of the scope, making one splashy move after another. No team was more aggressive last offseason, which makes it more puzzling that Ventura remains the manager as it all swirls away. His quiet, unassuming style is a bad fit.

It’s the last day of June, and the Sox are in last place in the American League Central, wishing they could trade spots with the Minnesota Twins. Who saw that in February? If you have watched the Sox lately, it’s painfully clear they need a wakeup call. Too much was invested in winning this season. The Sox don’t have the luxury of remaining irrelevant in Chicago, not when the young Cubs took a wrecking ball to their losing ways. Even when the Cubs fall, they are interesting. The Sox? Each day that goes by without a shakeup to this sleepy team sends this message to their fans: We just don’t care.

I am on record as saying I want Robin Ventura removed as the manager of the Chicago White Sox. Before I delve into why I want him to be removed from his post, let’s first discuss how the Sox came to be in the situation they are today.

Back in fall of 2011, after a 79-83 season and well documented riffs between Kenny Williams and Ozzie Guillen, the White Sox released Guillen from his contract to allow him to become the manager of the Florida Marlins. This was in the wake of almost 750 career wins, a .513 winning percentage over 8 seasons, and of course a 2005 World Series Championship.

During Guillen’s tenure with the team, they were in contention to win the AL Central more often than  not. Though it’s not saying much, it was easily the best 10 year stretch in the organization’s history.

While he a solid player over the course of his career with the team, Guillen immediately became a cult hero to Sox fans. His personality resonated – check that, resonates – with Sox fans. Tough, loud mouthed, gritty, and blue collar. Just like the people that make up the South and South West sides of Chicago.

With that said, even after his great stretch of success with the team, Guillen had no problem whatsoever speaking his mind to the media, and it didn’t matter to him who he was calling out. Be it a player, a coach, an umpire, or his boss, he never held back. it was ultimately Guillen’s mouth that got lead to his demise with the organization.

I went on record in 2011 saying that the Sox probably did need a change of culture. That Guillen had worn out his welcome with the team. The teams’ talent level had dropped pretty significantly come 2011, Guillen was (publicly) looking for an extension, and Kenny Williams was pulling out his hair trying to curb his manager’s words. It was far from a good situation for anyone involved, from Kenny Williams to the fans, and in late September Guillen was released of his managerial duties so he could take the reigns in Miami.

In steps Ventura – after Guillen had continually ran his mouth both publicly and behind closed doors, The Sox asked Robin Ventura to manage the team for the next season. I was all for this – though he had never coached, let alone managed at the big league level, Robin Ventura is a great baseball persona; he excelled as a player over the course of his career, was well respected by anyone who ever played with or against him (sans Nolan Ryan), and inexperience aside, you don’t just forget how the game works. Sign me up.

In 2012, the team was in first place for the large part of the season pretty unexpectedly. Fans approved of Ventura’s job in his first year, because “winning cures all” as the saying goes, even though they didn’t make the playoffs. They did so by playing very sound defense (2nd fewest errors in baseball) and with veteran leadership of Paul Konerko, AJ, and others. Then comes 2013. Followed by 2014. Two abortions of seasons that were hamstrung by the incredibly inflated contracts of Dunn, Rios, and Danks among others.

These two seasons were marred by everything we see today. Bad defense. Awful baserunning. Terrible fundamental baseball all the way around. Absolutely no TWTW. I said time and time again that 2015 would be the year of the White Sox. Most of the bad contracts were off the books, their talent has improved significantly, and on paper, they had a top 2-3 off season in baseball. But here we are today. We are still watching, day in and day out, awful fundamental baseball. The roster is completely different from 2013-14, but the same mistakes are being made. The one constant?

I am not saying Ventura is solely responsible for the shit show that has been 2015, because he’s not. Ultimately it rests on the players to play as expected. But when they don’t, that ultimately reflects on 1. The manager, and 2. The people who employ the manager. From top to bottom this organization is a disaster. Their ability to scout positional talent is piss-poor. Again they’re swamped with bad contracts. In a perfect world, Jerry Reinsdorf would sell the team, Kenny Williams would no longer be second in command, and of course Robin Ventura would no longer be manager. I won’t even go into how bad player development and scouting has been, either. That mini-rant was a long time coming. I didn’t want to write about it with the good vibes the Blackhawks have brought Chicago in the last few weeks, but with the Sun Times article that came out yesterday, now is the perfect time. As I mentioned before, the Sox needed a different voice in 2012, someone who was the antithesis of Ozzie Guillen. I didn’t necessarily mean Robin Ventura, but that’s who they landed on, and I didn’t hate it at the time. Now we are in the exact same boat. What the Sox need right here, right now is someone to come in and say “enough of this shit, this isn’t acceptable” and light a bonfire under their ass.

Which brings us to Ozzie Guillen. By all accounts, Guillen wants back in the game and bad. I’ll never forget when the Sox hired Guillen in 2004. My old man looked at me and said “it might not be with the Sox, but Ozzie Guillen will win a World Series as a manager.” Just a little over a year later, that came to fruition.

Ozzie Guillen is the perfect 3-4 year manager. He gets his teams ready to play, they run the bases well, play outstanding defense, and have that winner’s mentality. TWTW, if you will. The Sox currently have two premier players at their positions – Sale and Abreu – and a lot of young talent surrounding them in Eaton, Quintana, Rodon, Garcia, and hopefully Fulmer. They have a core that can be built around and contend for postseason play with proper glue guys surrounding them.

So hire Guillen? Fuck it, hire Guillen. Right now, this is completely hypothetical of, because I think it’d be a way of Reinsdorf and Kenny Williams surrendering to the pressure of the fan base. But with that said, the organization is at an all-time low in so many different ways, so what is there to lose? Worst case scenario you appease the fan base, maybe see a spike in attendance for a short time, yada fucking yada. Best case Guillen comes in, there is a complete turnaround in performance come 2016 and the Sox are the contenders experts expected.

I do know this – Ozzie Guillen would not accept the status quo. He would not let this group of good baseball players play so poorly. And if they do play poorly? He’d say GTFO. Yes, I wouldn’t be surprised if he wore out his welcome again. But hopefully by then Chris Sale and Jose Abreu are on the down swings of their careers at that point, ones that weren’t completely wasted on less than mediocre teams, which is my grade A fear as a Sox fan right now.