This week's episode of Twisted History is all about sex tapes.

I start very early on with Marilyn Monroe's alleged 16 mm escapades, and then drag you into the modern age where the sex tapes are no longer recorded on "tape".

And one of the old-time examples I chat about is late-night TV icon, Johnny Carson.

For those who don't remember him exactly, Carson started hosting NBC's The Tonight Show before Jimmy Fallon was even born (in 1962), and he kept at it for 30 years before retiring from show business altogether in 1992 at the age of 66.

At the height of his stardom, Johnny was notoriously private about his personal life and after leaving The Tonight Show he rarely appeared in public.

HOWEVER… According to a 2014 TMZ article, a Johnny Carson sex tape exists, and, at that time, it was being shopped around for sale.

It's unclear which of Carson's four wives is in the video, but since it was filmed in the 1970s and Carson married model Joanna Holland (his third wife) in 1972, people naturally assume it is her.

The video allegedly starts with just five minutes of Carson and his wife lounging nude by a pool.  It then cuts to the boudoir, where Johnny horsepounds his bouffant-haired bride for 20 minutes with a penis that has been described as "breathtaking"… Allegedly. 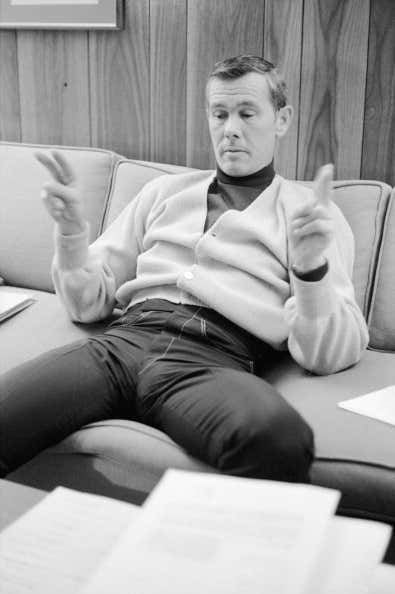