Writer's Note: I'm Carl's intern who went 57% ATS on nearly 250 documented NFL plays over 3 years on an independent blog before hopping onto Barstool, and I'm holding to that mark this season.

Last week, I got you to cash with KC's win and the GB/IND Over, but I fell 3 points short of the cover with the Eagles against the Browns. When the team you're backing throws a pick-six and turns the ball over twice inside their opponent's 5-yard line, you're not winning that bet. The Carson Wentz experience continues to ascend to new levels of recklessness, but I signed up for it and shouldn't be surprised. That's on me.

Even after that game with the Browns now having 7 wins and the Eagles only having 3, you gotta love that these teams are merely separated by two spots in Super Bowl odds: 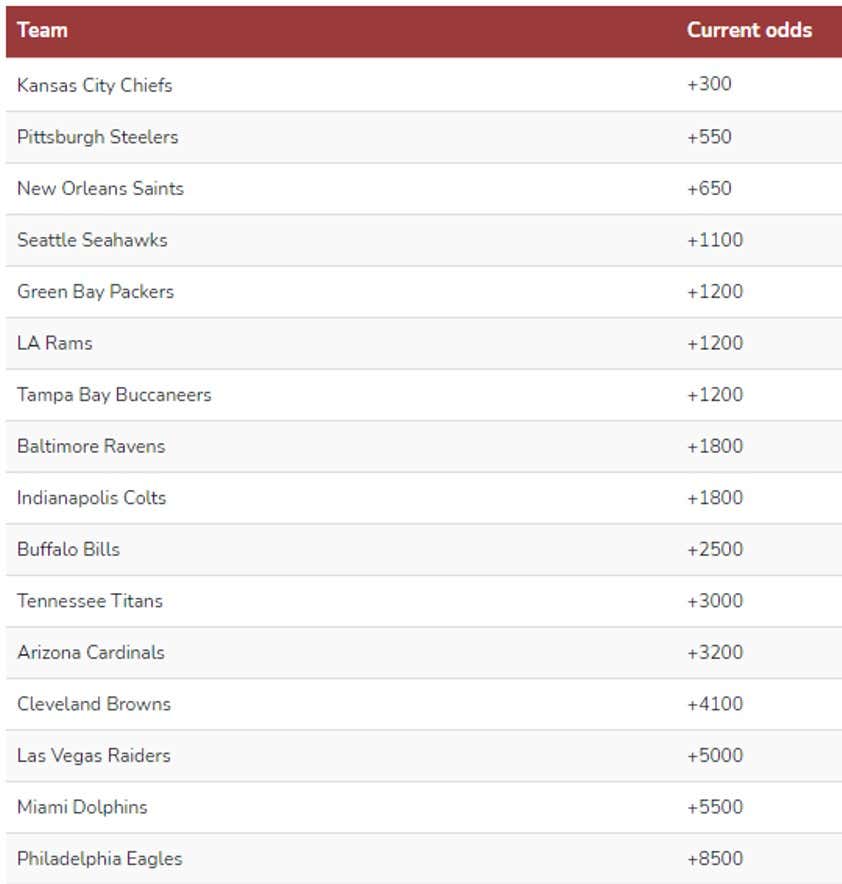 Alright, it has been a busy holiday weekend in the Ropes household, so I'm going rapid-fire with the picks today and keeping it tight.

Action: 30% of bets on Falcons

This is a rat line. Just a rat fucking line.

We all just saw the Raiders go toe-to-toe with the Super Bowl favorite in prime time while the Falcons offense mustered up a grand total of 9 points last week. Before looking at the line, my gut reaction was Raiders -6. When I'm off by multiple points, something is up and I always look to bet the other way.

The Falcons D was a joke to start the year, but they've been trending up with Raheem Morris at the helm and actually getting to the quarterback (7th in pressure rate). Last week was a tough spot as they needed to prepare for two very different Saints quarterbacks (shoutout to Sean Payton for being a mindfuck), so the Falcons D should bounce back with more focused prep this week. As for the Atlanta offense, they'll deeply benefit from a drop in competition, going from a top-5 defense in the Saints to a bottom-third defense in the Raiders.

I hate it, you hate it, but the Falcons are the side here.

The Browns haven't played in decent weather for over a month, so they'll use the Jacksonville weather as a rare opportunity to get their passing game going and build Baker's confidence before facing the Titans and Ravens in the next two weeks.

The Jaguars defense is atrocious, but they're particularly bad at rushing the passer and defending the pass. What's worse is that they just added their best pass rusher (DE Josh Allen) to the IR, and everybody in their secondary is dying. Injuries have made their weaknesses weaker, so Baker will feast.

As for the Cleveland D, I already made the point last week that they're an average defense who has benefitted from cataclysmic weather. To add to that, they're without their two best defensive players in Denzel Ward and Myles Garrett, and they've also lost a key contributor in LB Sione Takitaki. With injuries/illness at all three levels for the Cleveland D, the Jaguars will be able to move the ball much more easily than they did against the elite Steelers D last week.

Sharps have already bet this total up from 46.5, and I know it's sharp action because the majority of bets are going on the Under and no normal human being was like "Oh! Lemme get that Browns/Jags Over!"

There's still some meat on the bone at 48, so let's take it and get some green.

Bottom line, these two quarterbacks are savages. They just sling and don't give a fuck.

Bills OC Brian Daboll has ramped up aggression in recent weeks, and he'll want to build an early lead today because he knows the Chargers have fully unleased Justin Herbert to toss bombs with no consequences. Herbert is making 60-yard throws look easy and he's firing seeds that are the epitome of a dope rope. He's making his WRs laugh at how good his throws are:

It's a damn shame this rookie is being wasted on the L.A. "fan base," but at least COVID conditions are properly managing his expectations for the number of Chargers fans in attendance as his career progresses.

The Chargers are like the guy who is the life of the party but burns out quickly. They bring loads of booze, play A+ music, and tell hilarious stories, but then you blink and they're passed out in the corner covered in puke. I'm all-in to ride the wave on their Overs because all of their games are a wild ride, but under Anthony Lynn they are not to be trusted as a side for the rest of the year.

Get your popcorn and watch the scoreboard light up.

This game was properly priced at TB +2.5, but then Tampa looked out of sorts Monday night, and the people flocked towards the public favorite to balloon the line through the key number of 3.

As long as the Bucs aren't facing a top-10 defense, they pile up points. They just ran into a buzz saw in Brandon Staley's Rams D that has given up an average of only 4.6 (!!!) points per second half this year (1st in NFL, obviously). With a Rams lead at the half, it was curtains for Tampa.

This is all about Tom Brady being a competitive psychopath and making adjustments from last week that will bear out favorably against a step down in defensive competition. Instead of a sloppy combination of inefficient runs to Leonard Fournette and quick-release bombs to nobody because he hasn't built enough chemistry with his weapons, look for Brady to find rhythm with a short passing attack backed by a more dynamic RB in Ronald Jones.

The Bucs offense will return to form and score at will against the average KC defense. Getting field goal insurance plus the hook is just too much in what will be a back-and-forth contest.

Enjoy these mostly-gross picks and best of luck out there today!