Naturally the government is trying to play this off like it isn't aliens, probably to keep the masses calm. A lot of folks are super on edge the last thing they need is the chaos that being overtaken by aliens would bring.

Coley is absolutely right. If you don't think this is an Alien homing device or antenna or battery then you are dumb. If they found this thing 50 years ago this entire area would be blocked off by the military and we'd have an Area 52. The people who found the Alien battery would have their brains erased or worse and we wouldn't know about the goings on at Area 52 until a Netflix Documentary came out 70 years later. Now that we have established that is firmly and unequivocally aliens we can also say that this nondescript hunk of metal is ominous at best. What are the aliens up to? What do they want with us? Nobody knows. People are always afraid of the unknown. You know the only thing scarier than aliens...people. Enter...the Georgia Guide Stones 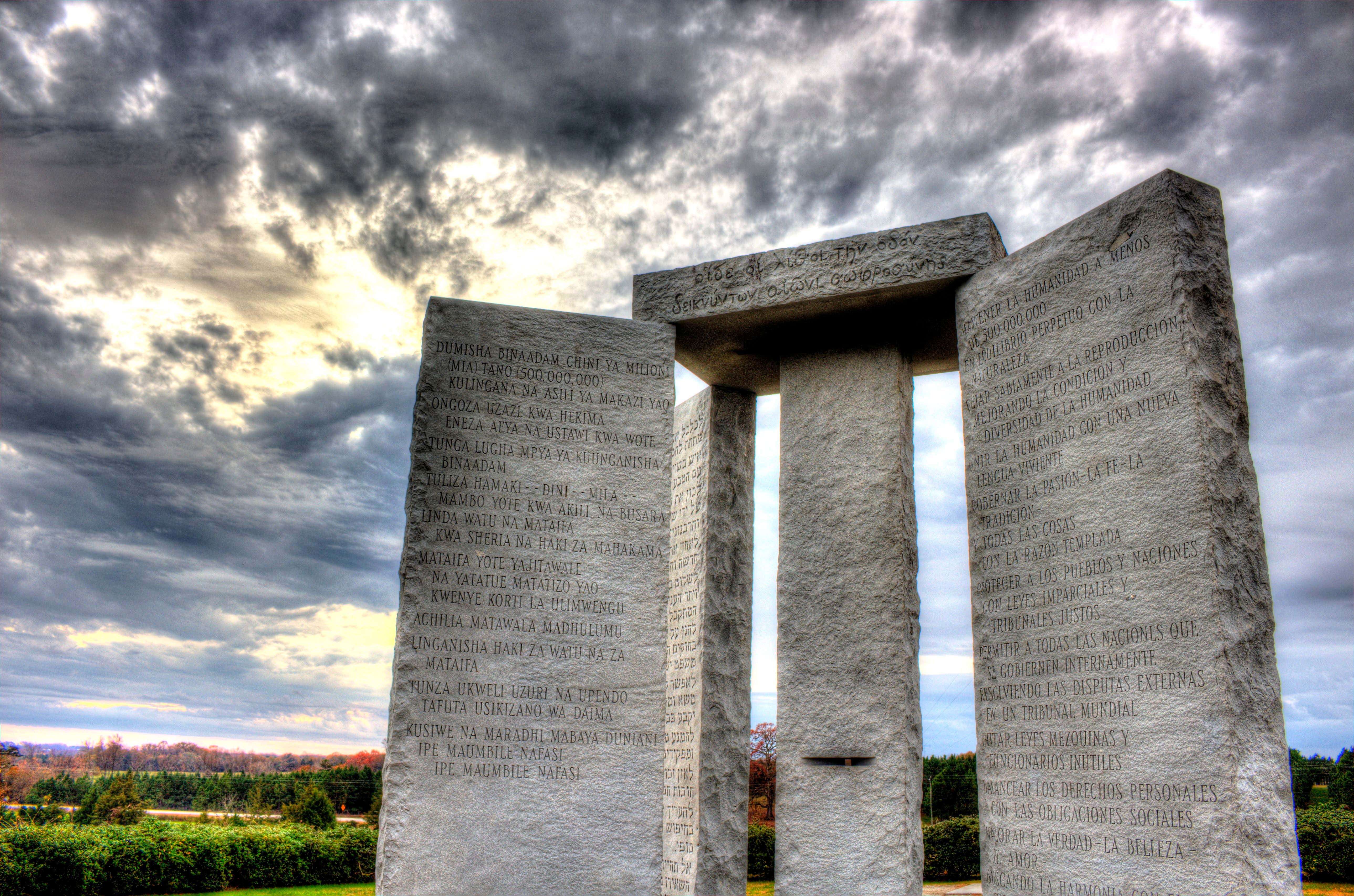 Eddie and I did a Dogwalk on the Guidestones last year. It's a freaky fucking mystery where this thing came from. Nobody knows for sure. Nobody has talked since it went up. You can listen to that ep here

This is what the Guidestones say(in basically every language)

500 million people max. Nice round number I suppose. Only problem is that we currently have 7.8 Billion people on the planet. That means roughly like 99% of us have to die. And I said us on purpose because I hate to break it to you…if you're reading this you're not one of the top 500M people on Earth. You're dead. So, step one on the guidestone…massive genocide. Not the best.

If somehow you survive the genocide, you will absolutely be castrated because there is no way your sperms or eggs are going to be good enough for the human population to want to pass down under these restrictions. The only people having babies will be people like Brady and Gisele. Everyone else will be shooting blanks into one last midnight for their gene pool. There's a word for this and it's called…eugenics. Hitler fucking loved eugenics. For the record. Rule #2…also…not the best.

If I am alive and this language is English then count me in. My guess is that the people who want to start Earth over with a new super race after killing all the undesirables like you and me are also going to want a new super language. Remember Paso a Paso books in Spanish class and how much those SUCKED? Well now you're going to be forced to learn some language that will sound like what Elon Musk names his kids. Pass.

4. Rule passion — faith — tradition — and all things with tempered reason

I love passion, faith, and traditions. Tempered with reason doesn't sound too bad. This rule can stay.

5. Protect people and nations with fair laws and just courts.

After 99% of the population is brutally murdered, the people who are left should be protected by a fair court system. Good rule. On board.

Everyone just mind your business. I like the sound of that. No wars. Sort like a League of Nations…if you will. What could go wrong!

I am not going to name names of petty officials, but I am sure the comment section could help me with that one.

Can I be honest with you guys for a second? We should go back and add this to the 10 commandments. This is better than respecting your parents or saying the Lord's name in vain. Criticism should be paired with gratitude. Rights should be paired with responsibility. Everything has a cost, even your rights which were endowed on you.

A little metaphysical for my taste, but yeah I am in for harmony with the infinite, whatever that means.

Everyone should know how much I love Earth at this point. Sure, before landing this job at Barstool I worked in plastic packaging, but plastic gets a bad wrap, no pun intended. Either way, I love this planet. Easily my favorite. Elon Musk and other space nerds can have Mars. If I wanted to live in a cold Arizona looking ass planet I would just move to Utah where the Aliens are littering metal objects on our planet.

I didn't plan on breaking down the Guidestone when I started this blog to be honest, but here were are. The point being that humans are way worse than aliens. Even if Aliens want to come down here and murder all people…that's only 1% more death than what humans are proposing to do to other humans. We are the fucking worst and we already exist. We've already done some of this shit. And by some…I mean only the bad rules on the guidestone. Humans have being trying to genocide other humans since the first time a human met another human. Those are facts. Aliens have never explicitly stated that they want us dead. They might be good guys. I am team Earth and team Humans…but…let's not pretend that aliens are more of an imminent threat than people. I would even be Team Guidestone if we could scrap the parts about genocide and eugenics. Those are bad in my book. Very scary rules that someone thought was a good idea and necessary to carve into stone on top of a hill for everyone to read for the rest of time. That's not good.