(CNN) - What started as routine wildlife assistance took an extraterrestrial turn for Utah's Department of Public Safety after officers stumbled upon a mysterious monolith in the middle of rural Utah.

Officers from the Utah Department of Public Safety's Aero Bureau were flying by helicopter last Wednesday, helping the Division of Wildlife Resources count bighorn sheep in southeastern Utah, when they spotted something that seemed right out of "2001: A Space Odyssey."

"One of the biologists ... spotted it, and we just happened to fly directly over the top of it," pilot Bret Hutchings told CNN affiliate KSL. "He was like, 'Whoa, whoa, whoa, turn around, turn around!' And I was like, 'What.' And he's like, 'There's this thing back there -- we've got to go look at it!'"

2020 was not written by the same people who penned the final season of GAME OF THRONES. No no. 2020 knew it ran up the score the first 11 months of the year and could not disappoint with the finale. A week out from December and, BAM, aliens drop their space dicks right into Utah's wide open hole. Never saw it coming and somehow saw it coming at the same time. Just brilliant writing. Aliens feels so cliche but they introduced the character in such a new, subtle way that you really have to respect the craftsmanship of it all.

Naturally the government is trying to play this off like it isn't aliens, probably to keep the masses calm. A lot of folks are super on edge the last thing they need is the chaos that being overtaken by aliens would bring.

Still, Hutchings said he thinks it was most likely placed there by an artist rather than an alien.

"I'm assuming it's some new wave artist or something or, you know, somebody that was a big ("2001: A Space Odyssey") fan," he said, referencing a scene in the 1968 film where a black monolith appears.

The location of the monolith is not being disclosed, and it is not yet clear who -- or what -- put the monolith there, DPS said.

Ahh yes, those classic Utah artists we all know and love. Anyone who is anyone knows about the booming and thriving art scene constantly popping off in Utah. Don't spit in my coffee and tell me it's cream, bucko. I know it, you know it, we all know it, that right there is an extraterrestrial flag that has been planted directly into our Earth like Excalibur itself. As clear an act of aggression as these eyes have ever seen. The aliens don't even respect us enough to war with us. They just called us their son and claimed us on their taxes for the rest of the universe to see. It's embarrassing. Jupiter's moons don't even recognize us as a planet anymore. None of 'em. Not Ganymede. Not Amalthea. Not even Thebe! Honest to God, Thebe!

A depressing start to the day to put it lightly. Do we even celebrate Thanksgiving anymore? What do our new overlords want us to do? Are there new holidays? I have so many questions. Hopefully they send down a nice informational packet soon so that we can get readjusted to our new reality. Really want to head into 2021 fresh, a clean start is what we all need. The monolith they planted seems nice, certainly seems worthy of worship upon first glance. Could it control our brains? Most definitely. But it's too late to worry about that. We took our eye off the ball and now we belong to another planet. Happens to the best of 'em. Earth had a decent run, nothing to hang our heads about. 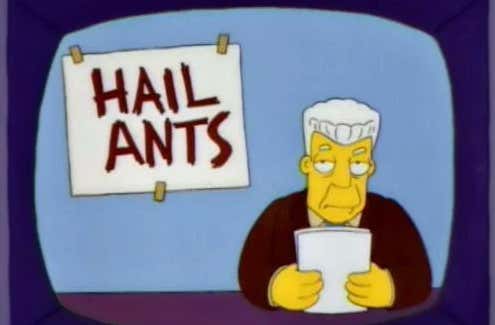