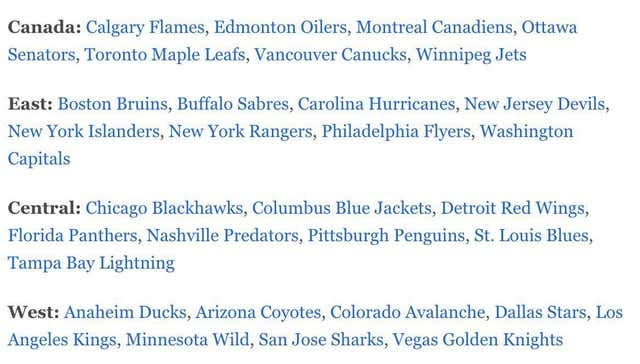 I mean we can all agree that these divisions make so much more sense than the ones we have currently, correct?

Granted, Bettman would have to figure out a way to make up for the lost games between the Flyers vs Penguins and Bruins vs Canadiens. But let's be real with ourselves for a moment here. The Penguins only have another couple of years of relevancy before Crosby retires and they go back to being a franchise that is teetering on the edge of bankruptcy and relocation. And then as far as Bruins vs Habs go, that could still very well end up being a matchup you'd see in the playoffs. So it wouldn't be gone completely.

But an all Canadian division just makes too much sense for the league to pass up. You don't think that Sportsnet would be unloading a gallon of maple syrup into their pants with the thought of having non-stop Canadian rivalry games for Hockey Night In Canada? TSN looks like they have some moose antlers growing in their pants already. And the league would finally be able to come up with an Auston Matthews vs Connor McDavid rivalry that actually works and isn't completely fabricated.

You'd put Detroit back in the Central Division and you can revamp that rivalry against the Blackhawks. There's absolutely no need whatsoever for Columbus to be in the Eastern Conference so you fix that issue as well. And then the only team that doesn't really make sense in the West would be the Minnesota Wild, but they're such a forgettable team that I don't even think we'd notice after a few weeks.

I guess we'll get a chance to see how everything actually works out this season, but maybe everything actually happens for a reason. Maybe a global pandemic came in to screw everything up in the world just so the NHL could fix its division alignments. It would be a pretty cruel means to the end, but you never know.

P.S. - I don't want to hear from any of you mouth breathing Penguins fans saying the only reason I like these divisions is so the Flyers wouldn't have to play the Penguins in the playoffs again. Go shove some soggy french fries into your shitty sandwich.