The old Milton office is up for sale. I think it's pretty obvious there is one suitor on the market, and that would be Barstool Sports. It's only right. Dave has long talked about eventually heading back to Boston, and we already have quite a few employees working remotely out of Boston as is.

There are a few ideas for what we could do with the office should we end up buying it. Maybe all the Boston employees work there. Maybe it's a minor league system of sorts. Maybe it gets turned into a museum and walk-through exhibit.

In my mind, it's a little bit of all that. The public would be able to come in and see the stabbed AC. The water cooler for emergency press conferences. A live squirrel exhibit. Dave's luxurious private bathroom. Melissa Marie's underwear. Etc.

But then it's also a madhouse of different employees. A mix of Boston employees, different people trying to get Milton tough, and random characters. Here is what I've put together for how the new Barstool Milton could possibly look.

Coley is back living in Boston with his family. He went from an intern at this office who was getting pimped by Milton's and maybe breaking air conditioners to now the Editor-In-Chief of the whole damn website. It'll be a nice homecoming for the Mick Man.

Jared tweeted that he was excited at the possibility of working at this office, but considering he needs to watch like 9 baseball games at once and the Internet wires at the Milton office are prone to being eaten by squirrels, I'm not sure how well that would work out.

Getting Kirk in the mix is a guarantee to make things more interesting. If employees get sent from New York to Milton and get a week of the Kirk Minihane experience, it will change their lives forever.

Send someone to Milton to get ruthlessly chirped by Ryan Whitney and they'll be begging for an Amtrak home within 20 minutes.

A Boston native, Kayce finally gets to return home to the city where she spent a year and a half her entire life. American by birth, and Bostonian by the grace of God!

I would not be surprised if Gaz sent a threatening note telling the former tenants to vacate the building or he'd take their families hostage. If you don't think Gaz is already brainstorming reasons to tell Dave he needs to be back there, then you do not know Gaz.

Dave has talked about wanting a return to Boston, but he's too busy carrying an empire on his back here in New York. But I'm sure he wouldn't mind going back to Milton once in awhile to whip people into shape/duct tape people to a wall.

Lil Sas aka The Bryce Hall Of The East Coast

A young, fresh-faced pup at just 19, The King Of New York may need to spend some time as The King Of Milton, Massachusetts. While he has the undying support of Lil Sas Nation on Twitter, he has been scared off of the Barstool comment section.

If he spends some time in Milton getting ruthlessly berated and broken down until he's a shell of himself, he'll emerge stronger than ever and random people insulting him will be the least of his worries. 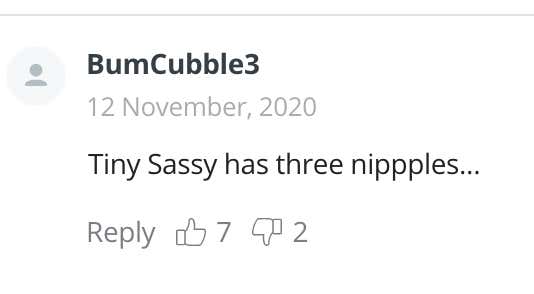 Milton will turn Lil Sasquatch into Big Sasquatch and a boy will emerge as a man.

While we're on the topic of teenagers, let's throw our other one in the mix. To be completely honest, I don't know if Ethan still works here. I don't know if he ever really worked here? I like Ethan and think he's funny. Saying he'll still work here in spite of not having a salary is a Milton-type move. This is not.

Points for honesty though.

I honestly only want Trysta to go to Milton for like a day to argue with Kirk about her infamous Steve Nash blog and then she can come home.

Murder. Arson. Assault. Kidnapping. All crimes against humanity. But even worse? Drinking beers at the airport. Time in Milton should knock some sense into him.

Nate wouldn't be there for training. He'd be there to do the training. I watch Nate chirp Lil Sas all day at the office. "Long day of scrolling Twitter?" "Taking off already?" "Forgot your laptop today? Shouldn't matter much." And on and on it goes. Give Nate a room at the Milton office and call it The Dawg Pound.

Dave has given Frank a limit of how much time he can spend in the NY office, but he never mentioned anything about the Milton office. Loophole alert! Frank can split his time between New York and Boston. If the Milton office is feeling down and dreary one day, Frankie Midnight can hop on an Amtrak and sing some songs to lighten things up.

For awhile, Dave was trying hard to get them to come to the office. With Alex now living in LA (and having the #1 podcast and merch sales anyway), it seems like that battle is officially lost. The New York City office just wasn't up to her standards. BUT…. maybe an old converted dentist office is more her style?

Speaking of people who have stopped coming to the office. This will obviously never happen but it would be undeniably hilarious if Riggs, instead of "wintering in Scottsdale," is forced to go work in Milton, Massachusetts.

This will be a Barstool baby through and through. What better place to grow up than the Milton office? Just picture it like it's the weirdest boarding school ever.

Oh also. "Who do you think you are writing this blog? You never worked in Milton you pussy. Send your ass there." Just beating you guys to these comments. I would welcome the opportunity anyway. It should be mandatory training for everyone. And as a Barstool superfan, I'd basically rather go there than Stonehenge or some shit.