LET'S ROLL BAYBEEEEEE!!! I know that draft night is one of the few days on the calendar that Knicks fans get to get excited about, even if it often ends in the typical bukakke of abject horror along with this clip going viral on Twitter yet again despite being old enough to vote.

But for those not paying attention, the Knicks actually seem to be being run competently for the first time since Donnie Walsh was here and I don't think that is my self-defense Knicks Fan Optimism talking or the fact that both my beloved Giants and Mets are being run by people who seem to know what the fuck they are doing! The Knicks hired a respected head coach, filled out the front office and coaching staff with people that fans of their ex-teams were upset to lose, and haven't traded for a comically overpriced veteran (yet).

Oh yeah, and they already moved up in the draft!

Not only did the Knicks potentially move up to get a better player or set themselves up to more easily move up in the Top 10, but the Knicks picked up a player that wasn't even on Woj's radar before he dropped his bomb.

I know that the word "Acquire" was misspelled in that tweet. But Leon can't completely fix decades of ineptitude in a few months. The bottom line is the Knicks not only gave me an extra few hours of sleep by moving up but they also got the 2009 Adriatic League MVP!

Yes, this a real thing that happened before LeBron even joined the Heat. Don't feel bad, I didn't believe it either. But it turns out Ante Tomic is basically Kristaps Porzingis without the outside game, the bad knees, or the max contract.

If we get one "Ante Up" soundbite played at MSG after a 33-year-old, 7'2" Croatian scores a basket, I'm giving the Knicks the W for the trade. However, Tomic retiring from national team play makes me skeptical we will ever see that glorious moment ever happen.

Now I'm not going to be able to tell you who I want or don't want in this year's draft because I barely watch college hoops these days and we are pretty much always dead wrong when it comes to which player is going to be a stud.

This may be the dad in me speaking, but I would love it if the Knicks finally got an exciting young point guard that can set up an offense for the first time in my life or drafted Obi Toppin because he's a local guy that went to high school a few towns over from me. My heart will also go to the guy with the best NBA Comparison in a mock draft since those things are always super accurate or to LaMelo Ball just because I know I'll at least have pageviews from all the chaos for the next few years if things don't work out, which is important since the Mets and Giants may actually be competent for the foreseeable future.

Regardless of who the Knicks draft, I can promise you I am blindly going to believe in them because I am blindly going to believe that Leon Rose and Worldwide Wes are operating as our Varys and Littlefinger by acquiring whoever is necessary to somehow manage the franchise appealing to players both on the team and outside. Or at least as appealing as it can be with this chooch in charge.

And of course, no matter what happens tonight, there is one absolute truth.

For more/better coverage than this, tune into the Barstool En Bee Ay Draft Show Presented By Mamitas Tequila & Soda tonight at 8 starring these three silly assholes and a bunch of your favorite Barstool bloggers as well as me! 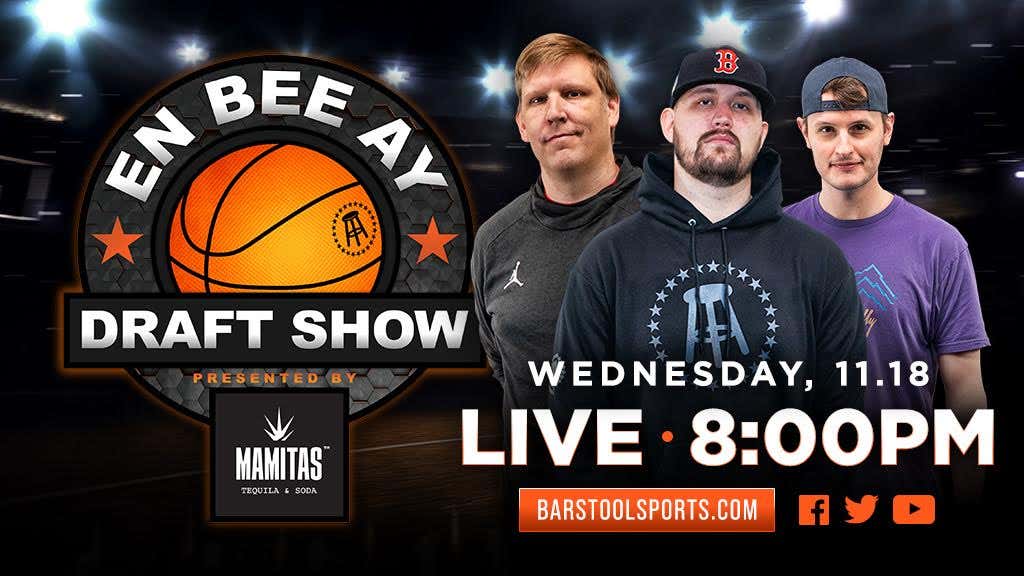