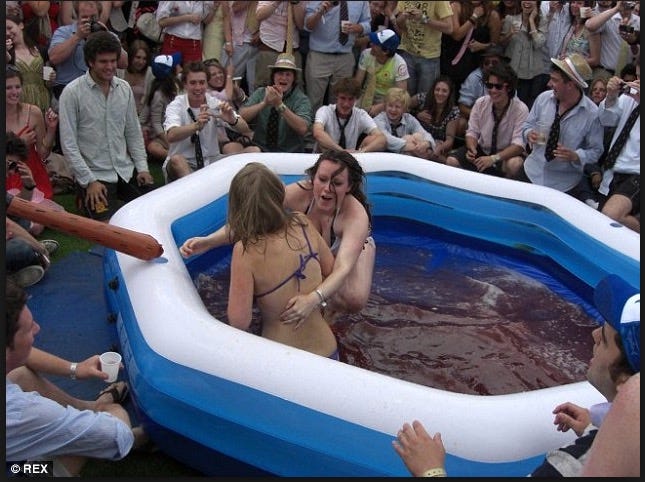 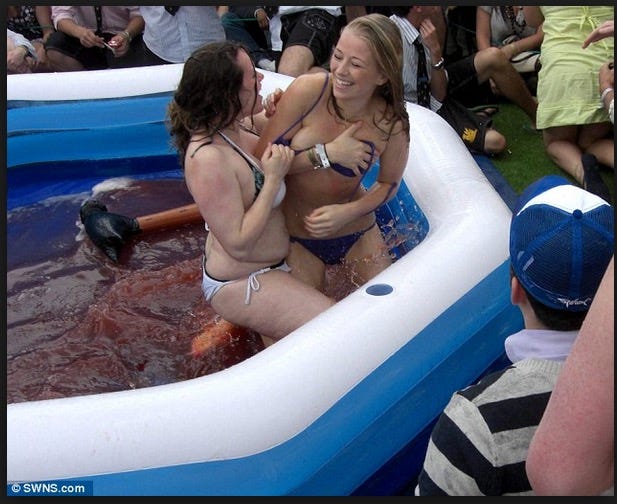 Dr Williams, now master at Magdalene College, Cambridge, put pressure on the society after complaints from female students about ‘exclusive and misogynistic’ drinking clubs at Oxford and Cambridge.

The Wyverns, one of the university’s most famous all-male drinking societies, had promised to bring back the wrestling at its 86th annual garden party last Sunday, where the theme was ‘blazers and bikinis’.

A college source said: ‘[The pressure] came from the Master and the fellows of the college. It’s frowned upon that we get a bad name because of this drinking society. It’s to do with the reputation of the college and how we’re perceived.

Students at both Oxford and Cambridge have also launched a campaign called No Exclusive And Sexist Societies. The petition calls for the end to clubs such as the historic Pitt Club, which has reputedly counted Edward VII and George V as members, and Oxford’s Bullingdon Club, whose alumni include Prime Minister David Cameron and Chancellor George Osborne.

And it also asks that both universities undertake disciplinary action on any student caught taking part in the societies. Complaints include first-year female students being invited to private dinners before being given alcohol and told to ‘flash’ older male society members.

This is a little bit heartening in a way, to see that America isn’t the only place that’s gone completely pussified. Good to see it’s a worldwide epidemic. Even over in jolly old England they’ve got campus social warriors and butthurt deans who operate on a super sensitive PC basis. Where everyone decided the best use of their time, energy and outrage on the campus of a prestigious university was to start a petition and rally to get jelly wrestling banned.

Seriously I’m going to need someone to explain to me how this is sexist and misogynistic? I mean unless they left the part out of the story where the bros kidnap the girls and force them into the ring to fight against their will…I’m pretty sure they all wanted to do it? Like it’s for fun…to win money…and have fun? Remember that? “Fun”? Also if you can name something more empowering to a woman than physically dominating someone in a ring while a screaming crowd cheers you on and places bets on you I’d love to hear it. Sounds pretty bad freaking ass to me.

An anonymous male student who signed the petition wrote: ‘I’m a member of an all-male drinking society, and, I could never say this publicly, but some of the behaviour is truly awful. I am embarrassed I don’t have the spine to stand up to these misogynists, but it’s hard.

‘There’s a lot of social pressure to be a ‘lad’ and, while I don’t join in, I’m too scared to speak up. I really hope this campaign is successful.’