I wanted to throw a little positivity out there given all the craziness in the world these days and where better to go than the Salt of the Earth wildlings of #BillsMafia?

WKBW- Following a four touchdown performance and throwing over 400 yards for the second time in his career, Buffalo Bills quarterback Josh Allen revealed that his grandmother Patricia Allen died suddenly at the age of 80 the previous day. Now what started as an idea on Reddit, has turned into an amazing fundraising effort by Bills Mafia. Most people are donating $17 at a time, (Allen's jersey number) and according to Oishei, they've received over 13,000 donations from all over the country, Canada and even some international donations.

Truth be told, I've been slowly writing this blog all week. I was originally going to publish it on on Tuesday but it got lost in the shuffle because Steve Cohen held the greatest press conference I've ever seen anyone hold.

Blogger's Note: If that drawing is supposed to be to scale, it must be Josh Allen standing next to his teammates, not a bunch of kids

Same with Wednesday but it got pushed back due to all the craziness of my daughter being off from school on her birthday.

Along with Thursday due to other blogs and podcasts.

Before finally getting the blog up on Feel Good Friday, where it probably belongs anyway, even though this will all probably still be outdated considering they have already cleared 400K!

I'd like to shout out the good people of Buffalo for having hearts as big as their QB1, but I think the Oishei Children's Hospital may have gamed the while system by throwing Zubaz on their donation buttons. 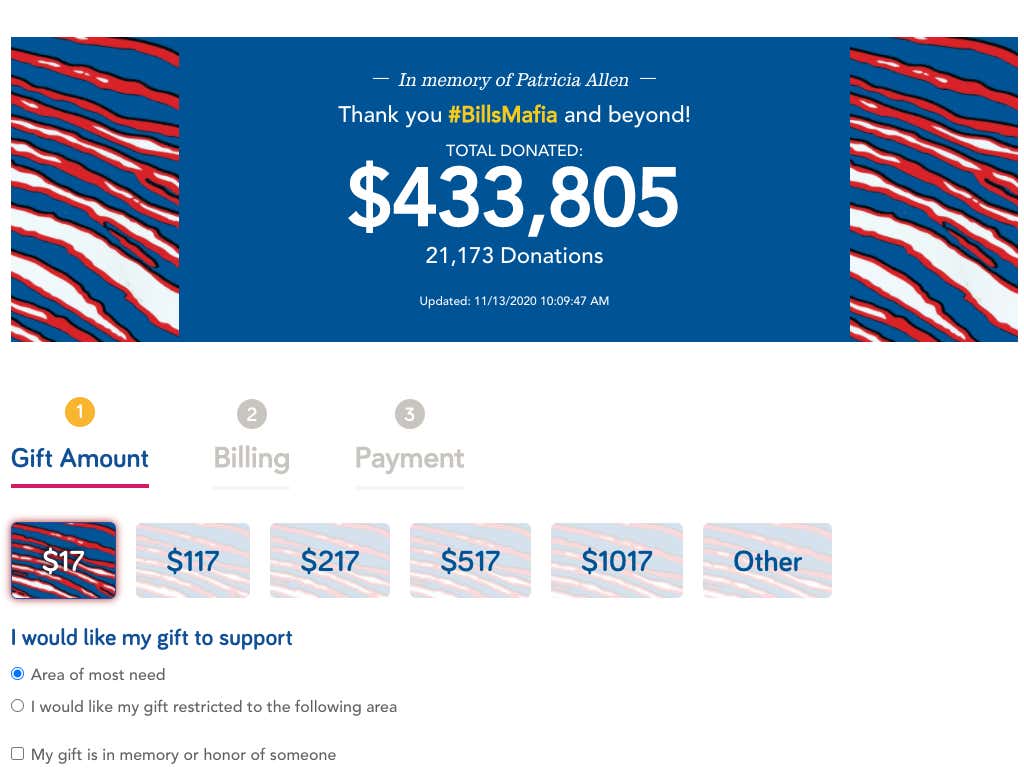 I mean, that is straight up unfair. If a member of #BillsMafia sees something with a Zubaz design on it, they are instinctively going to give some of their hard earned money to it, regardless of if its for a pair of super comfy pants or a great cause. It's like when a doctor hits your knee with a hammer and you kick. The good people of Buffalo saw those donation buttons and started hammering donations like they hammer Labatts, right down to breaking the donation counter like countless tables in the parking lot on Sunday afternoons.

I was going to say this fundraiser will hit half a milly by Sunday. But at this rate, $500K mark will be eclipse before we all sit down and open the cardboard boxes for our Pizza Friday dinners.

UPDATE: They hit $500K with Josh Allen taking them home right as people were diving into some dessert with their evening Jeopardy.

Fucking awesome. This shouldn't be much of a surprise since we all remember when Andy Dalton led the Bengals to an upset of the Ravens, which resulted in the Bills making the playoffs for the first time in 18 years.

Which resulted in #BillsMafia putting Dalton's foundation on their backs.

And even resulted in a standing ovation for Dalton before a preseason game the next season.

Now I realize this is Barstool SPORTS, so I'm not sure what angle this has for the Bills on the actual field of play. But I can guarantee the juju from this is a complete 180 from when this happened a few days before the Chiefs humbled the Bills on Monday Evening Football.

God I love the good/great/wonderful people of #BillsMafia.

Now play us out after saying it with me. NOBODY CIRCLES A GOOD CAUSE LIKE #BILLSMAFIA (I don't know if that makes any sense because circling the wagons doesn't make any sense to me, but I stand by it nonetheless).