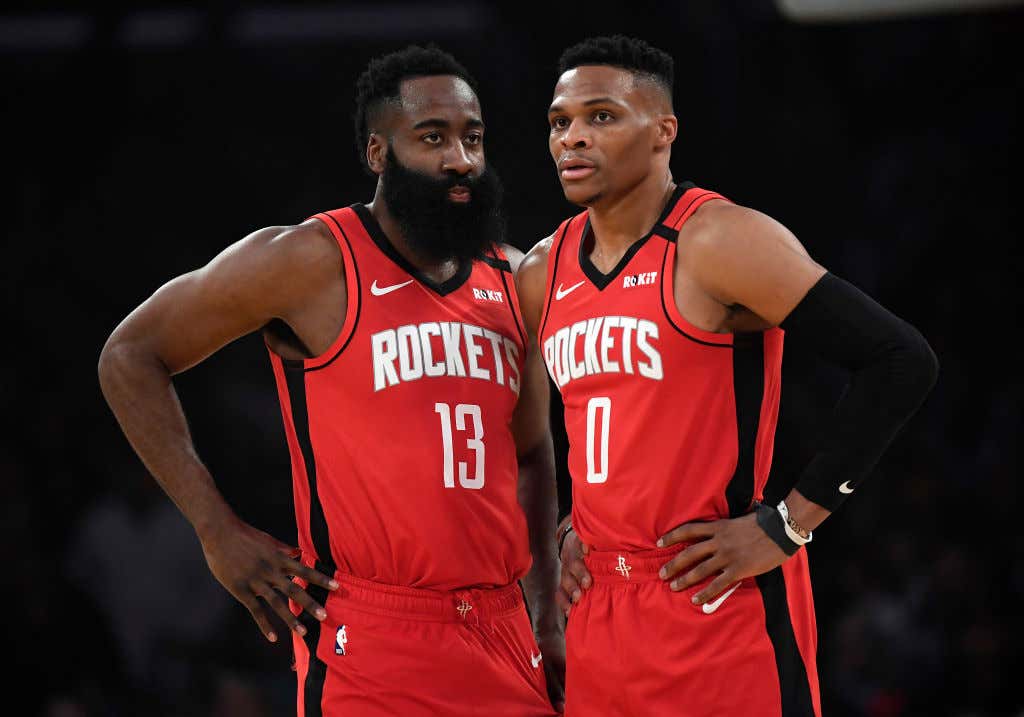 (ESPN) - As the Houston Rockets navigate an offseason of major change, a new challenge is emerging for the franchise -- the uncertainty of former MVP guards James Harden and Russell Westbrook on their futures with the team, sources told ESPN.

In the wake of the departures of head coach Mike D'Antoni and general manager Daryl Morey, Harden and Westbrook have expressed concern about the direction of the franchise through direct conversations or discussions with their representatives and the Rockets' front office, sources said.

Rockets owner Tilman Fertitta, recently promoted general manager Rafael Stone and recently hired head coach Stephen Silas have emphasized that the franchise remains committed to fielding a contender while featuring the two perennial All-Stars in their primes. However, the concerns expressed by Harden and Westbrook that Houston's window as a contender could be closing has left the organization fearful that the superstars' commitment to remaining with the Rockets could be wavering.

Although neither player has requested a trade at this point, that scenario has become a plausible eventual possibility.

Well this is certainly not something you wanted to hear as a Rockets fan this morning! There is already so much buzz around potential trades, whether it's James Harden and Philly and then last night there were rumblings about a Clippers/Knicks option for Westbrook, it does seem a little suspicious that now we are hearing the Rockets two best players are uncertain about the direction of the team.

That confuses me for a couple of reasons. For starters, wasn't James Harden consulted about the hiring of Stephen Silas? The GM came out and said they weren't blowing it up and are going to contend. The Roster hasn't changed one bit as of now. What could have possibly changed outside of a new coach/GM that would suddenly make the Rockets best two players feel this way? Unless Harden wasn't consulted AT ALL about these moves which feels like a stretch, it almost seems like both are laying the early groundwork for a potential way out of Houston.

It goes without saying, that would be pretty devastating for the Rockets. You don't just come back from losing two MVPs, one of which is arguably a top 5 player in the league. You aren't going to get 100 cents on the dollar, that very rarely happens in the NBA when you have to move this level of talent, and if they want out the Rockets are in a tough spot. Both are under contract for at leat 3 more years (Harden 2+1) and Westbrook (2+1), so it's not like the Rockets have to do a damn thing. It doesn't matter if they walk into the front office and demand a trade. Tough shit. So that's why I don't really get the point of leaking this to the media. I could understand if they maybe have 1 year left and a player option, but the thing is, do you think James Harden is turning down his $47M option? Do you think Westbrook is turning down his $47M option? No chance in fucking hell.

The whole thing seems weird. I'm just not sure what positive comes from this whole thing. It's not like they want the Rockets to spend a ton in FA, the Rockets have the 5th most expensive salary cap in the entire league. They have NO space whatsoever. Instead of being mad at the franchise and sketched out about their immediate future, how about you look in the mirror? Does Russell Westbrook have issues with how he played in the playoffs? The dude put up 17 a game on 42/24% splits with almost 4 TOs a game. James Harden wasn't exactly dominant against the Lakers either. Sounds like a couple of guys that don't really get that THEY are the immediate future of the Rockets.

Either way, definitely something to monitor with trades being allowed any day now. We could be on the verge of a big time rebuild and trades that would 100% change the landscape of the entire league.