Thank god that’s over. That was almost uncomfortable to watch. This game had everything, runs, ejections team record for home runs (8 by the O’s), position players, and triple pies. The only inning where the O’s didnt score was when outfielder Jeff Francoeur came in and had a 1-2-3 inning, no lie, he may have the best stuff on the Phillies staff. Blood, guts, all that stuff on the field. It was bad. I’m not going to lie, I wanted the Os to throw a 30 burger up there to get that 30-3 loss to the Rangers taste out of my mouth. I’ll settle for 19-3. Two more against these guys in the next two days. Does anyone know if a team has ever scored 100 runs in a four game series? Could happen this week.

It was also fantastic to see Chris Parmelee come up and have a huge game. Brought up by the team because his opt out date was up, and mashes two homers. He also got what may be the first ever triple pie to the face, I’ll have to have Jordie check that. Hope to see Parmelee stay hot, help the team, and get many more pies to the grill. BTW, this shirt may be the best O’s shirt on the market, all about pies to the face. 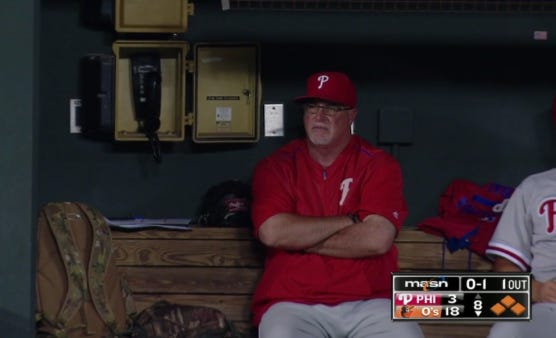 I also love the Phils bullpen coach not giving any fucks and KEEPING THE PHONE OFF THE HOOK while Francoeur was pitching, you know damn right he wasn’t wasting another one of his arms.