The first ever Stool Streams Draft is in the books! It was an action-packed set of selections that took place earlier this afternoon, and we are here to break it all down for you. But first, here is the format for the Jenga League that is set to kick off one week from Monday (Nov. 2). 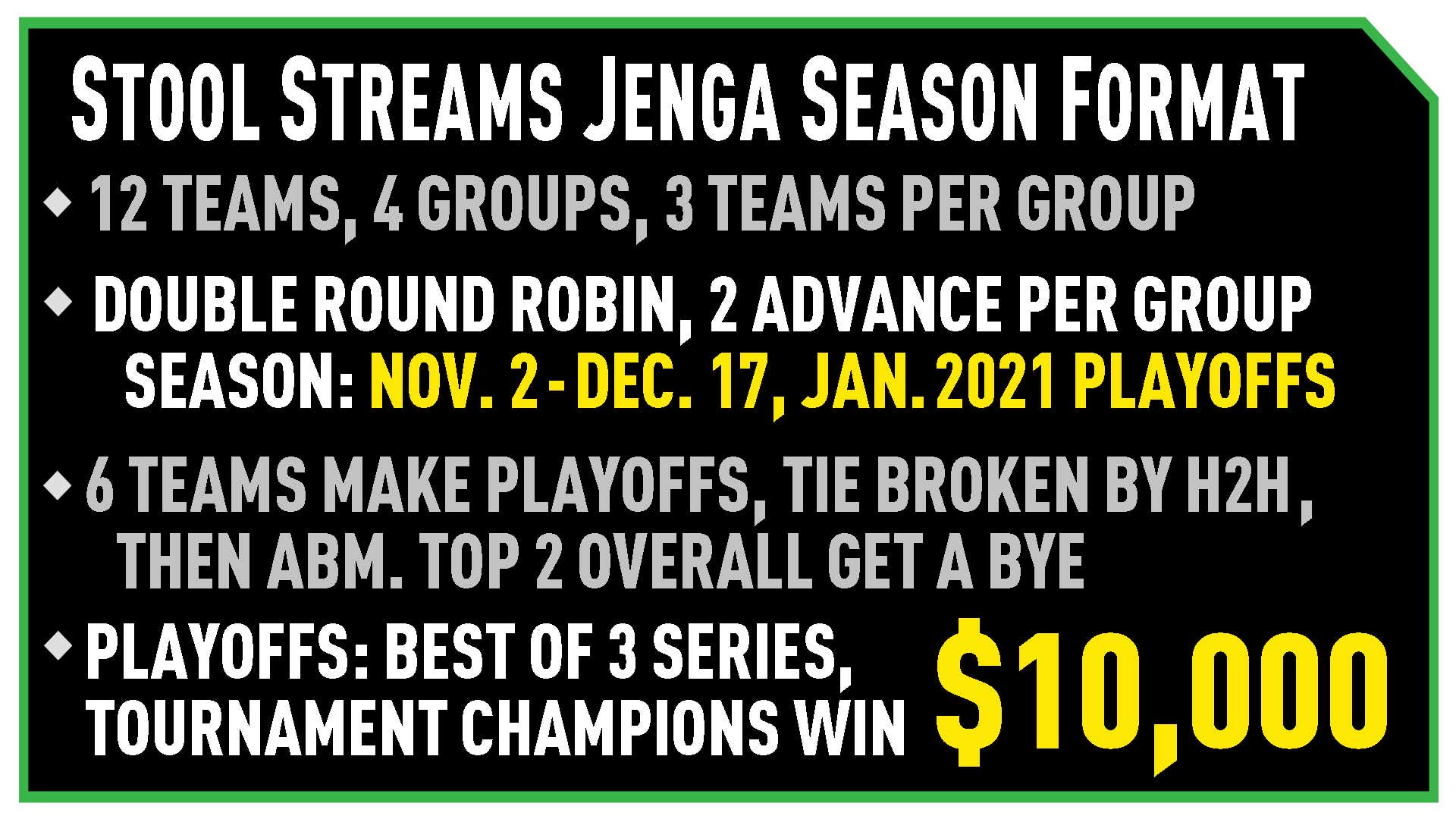 Groups and scheduling aspects are still being finalized, so stay tuned for more on that. Now, to the draft recap:

Analysis: It wasn't a tough selection to get the draft going. The Donnies were paired up back on September 10th, and despite catching the loss, you could sense awesome chemistry and a confident pairing. They are in good shape.

Analysis: Mr. Commenter out of left field! For those who don't know Kelly, she is the Head of Talent Relations & Communications here at Barstool, and helps book most of the guests we have on Pardon My Take. Yes, that includes the Matthew McConaughey interview from earlier this week. Kelly has been begging Mr. Cat and Mr. Commenter for an expensive purse for all her hard work, and the latter is using this as an opportunity for that gift to become a reality.

Analysis: Another chalk pick here, but Jeff D. Lowe nailed this one in his mock draft. Trent and Robbie are roommates, good friends, and have teamed up before inside the Triple S (a loss on 9/10 to Billy and Nate). Their team chemistry will not be an issue, but the biggest conflict for them will be having to wear their ZARCH jersey and not Trent's "Luggage Guy" outfit.

Analysis: Mr. Cat traded up to the No. 4 slot with Tommy Smokes to secure his good friend, Rone. They obviously get along really well, but something to note here is that both are going to be coming off long layoffs before their first match. Mr. Cat has not played since 9/15, while Rone's return will be his first time competing since 9/2.

Analysis: Another unsurprising pick at No. 5. This Zero Blog 30 squad has a combined record of 5-1 in Jenga, so they already have some nice momentum heading into Opening Day. After his Cornhole battle with Rico Bosco was canceled earlier this week, Cons will look to get some wins in the Jenga League over the next couple of months.

Analysis: It took up until around the midway point of the draft for the top player on Jeff D. Lowe's Big Board to be selected. Dave has never played inside the Triple S before, but he does have some Jenga broadcasting experience (with me on August 12th). Ria knows what's at stake, and her selection had a lot to do with that.

Analysis: Liz is tied for the most wins in the entire office (5-3 overall), but she went with a partner she has never worked with before. However, Big Ev is an experienced player at 2-2, so this is by far the team with the most amount of reps under their belt. Definitely a squad to keep an eye on.

Analysis: This one got contentious. The majority of Feitelberg's matches have been played with KFC or Kayce, so he was in a bit of a pickle here. It came down to an impromptu coin flip, and it was his podcast partner who had luck on his side. Kayce was not happy.

Analysis: While we are on the topic of contentious, it was another stunning pick here from the youngest player in our league. Leading up to the draft, Billy had played with Nate for FIVE consecutive weeks. But that didn't matter to the former quarterback. He went with Rudy, who has played just once before (and pulled the losing block vs. Nate and Billy). Rumors say Nate was VERY unhappy with his ex-partner's selection.

Analysis: What a draft from Tommy Smokes! After originally drawing the No. 4 spot, the Fordham grad traded down twice, yet still snagged a very high player on Jeff's Big Board. The one thing to be cautious of is that Frankie is a rookie and is known for letting his head game get the best of him in ping pong, so Tommy will have to keep him in check. With a record of 1-5, he will have his work cut out for him.

Analysis: Our fourth rookie was taken with the penultimate pick of the draft. While Frank The Tank has never played inside the Triple S before, he has been involved in one incident before regarding a Jenga match. Will his playing career be the first step to having a more positive experience on the turf?

Analysis: Mr. Irrelevant goes to someone who has not played since Opening Day in Marty Mush. The Duke grad did pull the losing block in his lone appearance, but he does seem to mesh well with Glenny Balls, who is by far the most entertaining player to play Jenga here at Barstool based on his past. Will we see some more jaw-dropping moments from Balls?

One thing to keep in mind - those who were not drafted are now free agents. Each captain may drop their partner during the first three weeks of thee season and pick up somebody else. We will see if anyone gets kicked to the curb during that timeframe.