GLENVIEW, Ill. (CBS) — As CBS 2’s Meredith Barack reported, Khaled Alayli worked at Jewel-Osco for 14 years. He says he was fired for violating store policy when talking to a customer who had harassed him for months.

Alayli says a customer bullied him for months, calling him the “R” word and other derogatory terms. One mid-August incident resulted in a call to Glenview police. The customer left before officers arrived.

But during a recent visit to the store, things between Alayli and the customer came to a head.

Alayli says the man was upset he had asked him to wear a mask more than once while shopping.

“No matter what you have to wear a mask in our store, and he said, ‘No, I don’t have to. I’m an anti-mask wearer.’ He yelled at me. He caught me on video,” Alayli said.

He says the customer sent the video of him yelling to Jewel.

“Six days later they tell me, ‘You’re fired. We have to let you go because you did not follow Jewel policy,'” he said.

It's nice that even in a brutally divided world, every single one of us can unanimously agree that this bully customer needs to be stuffed into a canon and fired into the fucking sun. There's arguably no more thankless job in American than Jewel(s) cart round up guy and those dudes show up every single day, rain snow or shine. They make the Portillos drive thru crew look like amateur hour in comparison. In fact there is no comparison. One good Jewel(s) cart round up guy is worth like 10 Roman soldiers and you're telling me Johnny FuckFace wants to drop some hard R words because he can't be bothered to wear a mask? No dice pal.

Someone needs to get word to the Jewel(s) management that Khaled Alayli needs his job back with a pay raise and promotion. No questions asked. There were customers lining up in the parking lot to vouch on his behalf to Channel 2 for his dedication to the community. Easiest decision of my life: I'm on team Khaled and the rest of you lunatics are coming with me. Firing the man fighting on the Mask/No-Mask front lines for violating Jewel(s) policy while he's literally enforcing said Jewel(s) policy is the kind of behavior that gets your ass kicked around here. The right thing to do is give this guy his fucking job back. The correct thing to do would be to have never taken it away in the first place. This shouldn't be so hard.

The world's a better place with hard working people in it. 14 years of busting your ass around the clock means you can give someone the business if they cross this kind of personal line. I'm sorry. I know it's easy to be big soft corporate pussies these days and cover your ass but for fucksake you can't let the bad guy win here. Let Jewel know they can still get it right. Tell them to give Khaled his job back. Twitter. 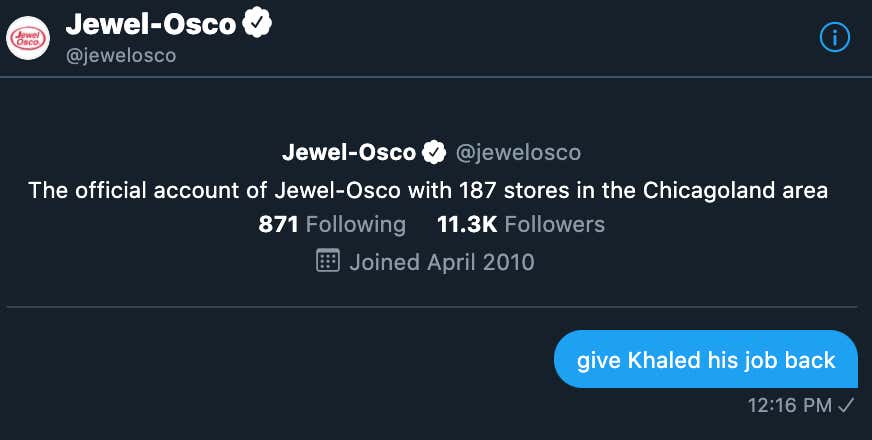