This is the moment a race horse is forced to guzzle down a bottle of champagne after winning a prestigious event in Mallorca.

The footage was recorded following the Manacor Grand Prix on the Spanish island on Monday.

An animal welfare society has today identified the horse as Helen Llinaritx and slammed the man's actions as 'appalling'.

As the proud owner of a few thoroughbreds, one of which came in 5th place in a $75K stakes race in Erie PA on Monday even though he was a 4-5 favorite, I gotta say.... this isn't a big deal. Our girl Helen Llinaritx here is prolly right around 1000 pounds, so one bottle of champagne won't hurt her. Prolly wouldn't have even blown a .08 if she got behind the wheel. That, and one quick glance at his racing profile shows me he deserves a little bubbly.

This girl has hit the board in 75% of her races! With 17 wins!!! Shower the fuck out of her with some champagne. She's earned it not only for herself, but for everyone she's made money for. Worst case scenario is she breaks stride in her next race or something because she's hungover from the champagne. Shit happens. I mean look at her eyes and tell me she's not enjoying ever moment of this... 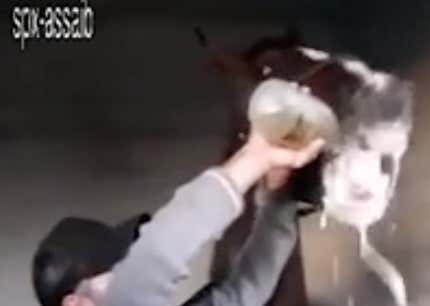 Just kidding, this is super fucked up, even if Helen Llinaritx is only a shitty standardbred. I mean what in the actual fuck? This is a case where the Napoleonic Code should be fully considered. An eye for an eye. Just hold this asshole down and funnel shitty champagne into his throat until he can't remember his own name. Kinda like when the parrot in Aladdin shoved the crackers down the sultan's gullet

Do it just like that and then never let this dickhead near a horse again. Then after that, assuming he's forced to sell all of his horses off because he's no longer allowed near them, let me know how much he wants for her. I'm looking to get into the Spanish horse racing game soon. Kinda like manifest destiny, but for horses and cross-continental, not just from sea to shining sea. I want to own horses on every continent on earth, even Antarctica. Just a worldwide monopoly of horses that line my pockets so much they'd make Bob Baffert blush.