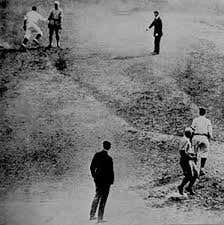 A line drive to Bill Wambsganss of the Cleveland Indians turns into baseball history. Down 7-0 in Game 5 of the World Series, the Brooklyn Robbins had the first two runners on base in the fifth inning when Clarence Mitchell ripped the ball up the middle. With the runners going on the play, Wambsganss catches the ball and turns an unassisted triple play. The Indians won the game 8-1 and would win the World Series 5-2.

It was a season of heartache and triumph for the Cleveland Indians. The Tribe won their first American League Pennant under Player-Manager Tris Speaker, posting a record of 98-56. The Indians mon a three-way race with the New York Yankees and Chicago White Sox. The season was marked by the tragic death of Ray Chapman in August. Chapman was hit by a pitch thrown by Carl Mays of the New York Yankees, the only fatality in the history of MLB.

The Brooklyn Dodgers made their second trip to the World Series in five years. At the time, they were commonly called the Brooklyn Robbins due to manager Uncle Wilbert Robinson. The Robbins posted a record of 93-61, finishing seven games ahead of the rival New York Giants.

The World Series began in Ebbets Field on October 5th. For the second straight season, it was a best-of-nine series. Stan Coveleski got the call to start for Cleveland, while Rube Marquard was on the mound for Brooklyn. The Indians scored the first run of the game on a throwing error by first baseman Ed Kotechny as his throw to second base sailed, allowing George Burns to circle the bases. The Tribe got a second run on a double by Steve O’Neill. In the fourth inning, O’Neill had a second run-scoring double. The Robbins would score a run in the seventh, as the Indian won 3-1.

Burleigh Grimes took the mound looking to even the series for Brooklyn, while Jim Bagby made the start for the Tribe. Grimes spread out seven hits without allowing a run, while the Robbins, while Zach Wheat with an RBI double in the first inning, gave Brooklyn the run they needed. Tommy Griffith had two RBI later in the game for the final score of 3-0. In Game 3, Sherry Smith had the Indians tied up in knots, as Lightning Boy Ray Caldwell allowed two runs before being taken out of the game with one out in the first. The Indians bullpen did a masterful job, but could not solve Smith as the Robbins won 2-1, thanks to RBI singles by Wheat and Hi Myers.

After a travel day, the series resumed at Cleveland’s League Park for the four middle games of the series. Stan Coveleski made his second start for Cleveland, while Leon Cadore got the call for Brooklyn. The Indians got two runs in the first, thanks in part to a run-scoring single by Elmer Smith as Tris Speaker later scored on a sac-fly by Larry Gardner. Coveleski was magnificent again, allowing one run on five hits. The Indians meanwhile got a two-run double by George Burns, a run-scoring single by Bill Wambsganss in the fifth to win the 5-1 and even the series.

Looking to swing the momentum back in their favor, the Robbins called up Burleigh Grimes for Game 5, while Jim Bagby looked for redemption for Cleveland. In a flash, it was 4-0 in favor of the Indians as the first three batters got on base, as Elmer Smith hit the first grand slam in the history of the Fall Classic. In the fourth inning, the Indians added three more runs, as Bagby became the first pitcher to hit a World Series home run. Down, 7-0, the Robbins got hits from Pete Kilduff and Otto Miller before Clarence Mitchell came to the plate. Looking for a spark, the Robbins tried a hit and run, but the ball was snagged by Bill Wambsganss, who stepped on second and tagged Miller for an unassisted triple play, the only one in the history of the World Series to date. The Indians added a run in the bottom of the fifth and won the game 8-1 to take a 3-2 series lead.

Game 6 would be a pitchers’ duel as Duster Mails pitched a three-hit shutout for the Indians, as Sherry allowed just one run. That run came in the sixth inning as George Burns doubled home Tris Speaker, as the Indians were one win away from locking up the championship with a 1-0 win.

For the clincher, the Indians again called up Stan Coveleski as Burleigh Grimes hoped for a better outing than Game 5. Coveleski was again in command, pitching a five-hit shutout to earn his third win of the series. The Indians stole a run in the fourth when Otto Miller’s throw to catch Doc Johnston stealing second base sailed into the outfield, as Larry Gardner scored from third. In the fifth inning manager, Tris Speaker had an RBI triple to make it 2-0, while Charlie Jamienson’s double in the second capped the scoring as the Indians became World Champions with a 3-0 win.