Barstool’s Radio Robot and Minnesota sports sad boi Deke Zucker is back to stirring the pot again. It appears that former Fox Sports 1 commentator Jason Whitlock’s recent appearance and verbal spar session on CCK radio (over whether Katie Nolan would have been paid $1MM if she was less hot… or something like that) has spurred another salary cap tier graphic, but this time instead of basketball, we’re talking about debating.

Not surprisingly, the Barstool Debate Team generated a lot of actual debate, even from within Barstool. Let’s take a look at some of the more interesting responses:

Others were BIG MAD they didn’t make the list:

While others were definitely honest in their appraisal of the tiers: 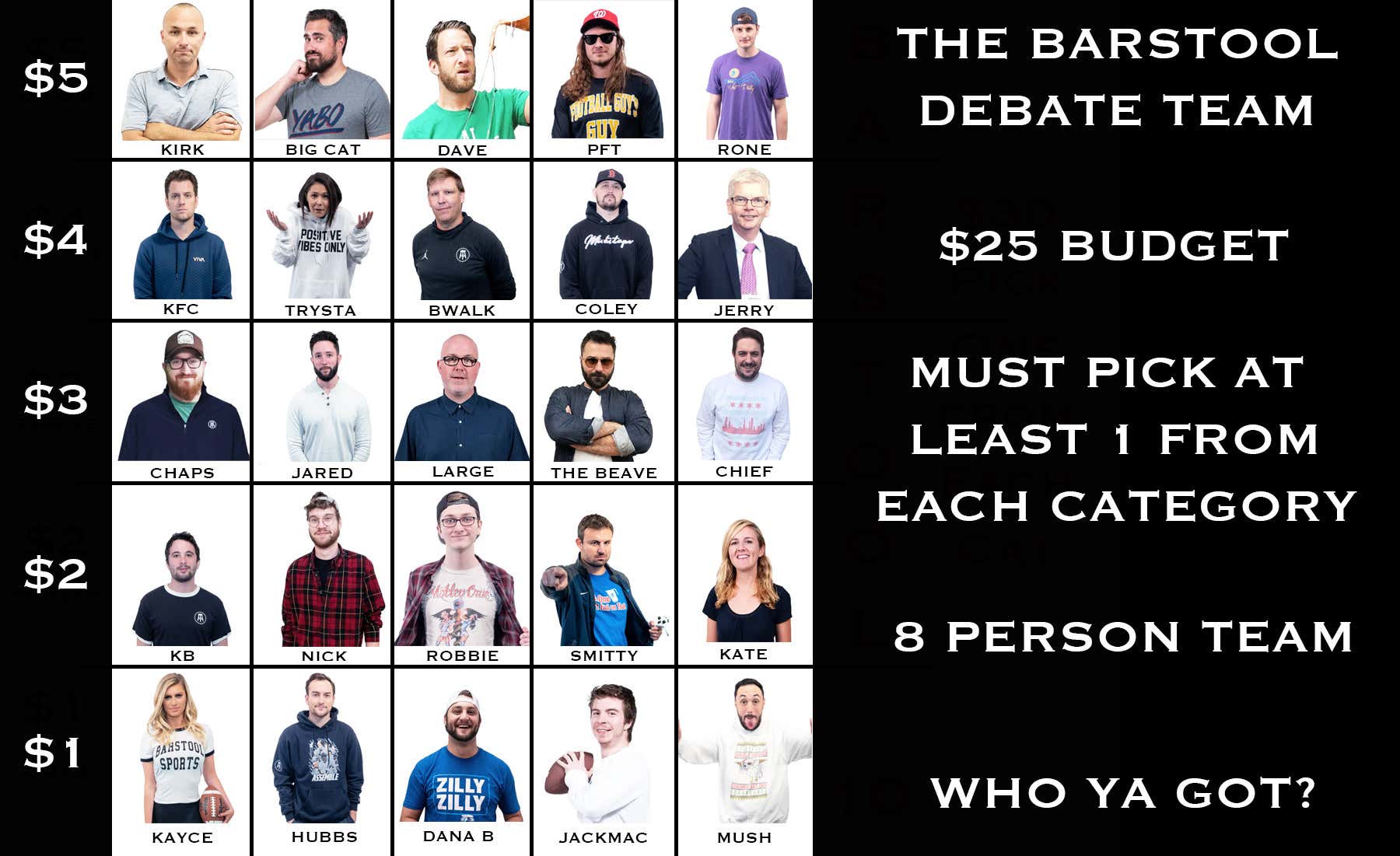 Given that the Presidential Debate is on its way, I decided I’d try my hand at the GM role as well. Here’s my team.

Dave Portnoy always wins. Those are the rules. He’s lightning-quick on his feet, he has a wide base of knowledge, and he’s not afraid to just make some shit up if the argument isn’t logically going his way. I know personally because I debated him (or tried to) in the semifinals of this year’s Barguments and he had the choice between dinner with Cameron Diaz and being the coach of the Little League World Series. We know he truly would have preferred to be a baseball coach but somehow won the debate by saying he would prefer dinner with Cameron because if he was able to shoot his shot, that would be an epic story and that trumps everything. LOL.

PFT is a no brainer at the $5 level, too. Not only is he legendarily quick on his feet, but he’s incredibly well versed in politics, sports, and current events. In a sense, the Dozen trivia show (SiriusXM85 at 11:00 EDT) is as much a debate show as it is a trivia one, which is why Brandon Walker always ends up losing. With Portnoy and PFT at the top of the pyramid, this team is already a damn wagon.

Of course, I picked myself. First of all, I enjoy a spirited debate more than just about anything. More importantly, I have a killer instinct when it comes to sniffing out bullshit. It’s literally one of my favorite things to do other than working on my handles and yelling about the Cowboys. So I’m like the Sugar Ray Leonard of debating, constantly probing from distance, feinting, and jabbing, until I see an opening and then WHAM you don’t know what hit you. Just ask DanaB.

I picked Barstool Chief out of the $3 tier because anyone who can defend a Burrata Salad as passionately as he can for as long as he has can play for my team. I also like the fact he grew 10 inches in one year. IN HIGH SCHOOL. He literally went from 5’2” to 6’0” in 12 months (oucchhh), which means he knows what it’s like to be an underdog, and in my world, that’s a huge plus. He’s also on team “exploring the inner wrist” after my Sunday Sermon blog , which automatically makes him a BIG TIME value add.

Can’t put a team together without the Rocket. Not going to do it. What he lacks in knowledge outside of baseball, he makes up for in sheer bigger than life personality. This team needs a heel who can rock the mic, and here’s where the Rocket shines. I mean can you imagine him lining up against some other team’s pencil neck and lighting them up with one of his legendary works? Game. Over.

I mean, who wouldn’t want Barstool’s Fantasy Football “savant” and resident Yak 6th chair on their team? Nick is a glue guy for any debate team, the kind of debater who can mollywop on another team’s back up to the backup. You also need people who can keep the mood light on the team bus on the way over, and Nick’s an ace at that. A no brainer on the $2 tier.

I’m adding KB for three reasons. First, we need a geography ringer and KB is the Rand McNally of Barstool. He bleeds obscure geographical facts. Second, I think he’s connected by a phantom umbilical cord to Nick, and I wouldn’t want them to get separation anxiety. And third (and mostly) because his photo on the graphic makes him look HILARIOUSLY short and once you see it, you can never unsee it.

JackMac at $1 is a steal. Fuck all the haters that say he just “presses record”, this man is a workhorse in everything he does. He is well researched, knows everything you could possibly know about the Coronavirus, and his brain is always ready for a good verbal spar, especially about why Klay Thompson is not a Top 50 NBA player. #ISupportJackMac

Pretty much everyone at Barstool would make pretty damn good debate teammates. We all enjoy arguing, loudly, and with passion, and most of us are happy to get into the mud if we absolutely have to. But for $25? I’ll put my team up against anyone's. It’s a Murderer’s Row of debaters.

Who’s your choice? Remember, $25 budget, EIGHT players, and every tier needs to be represented.