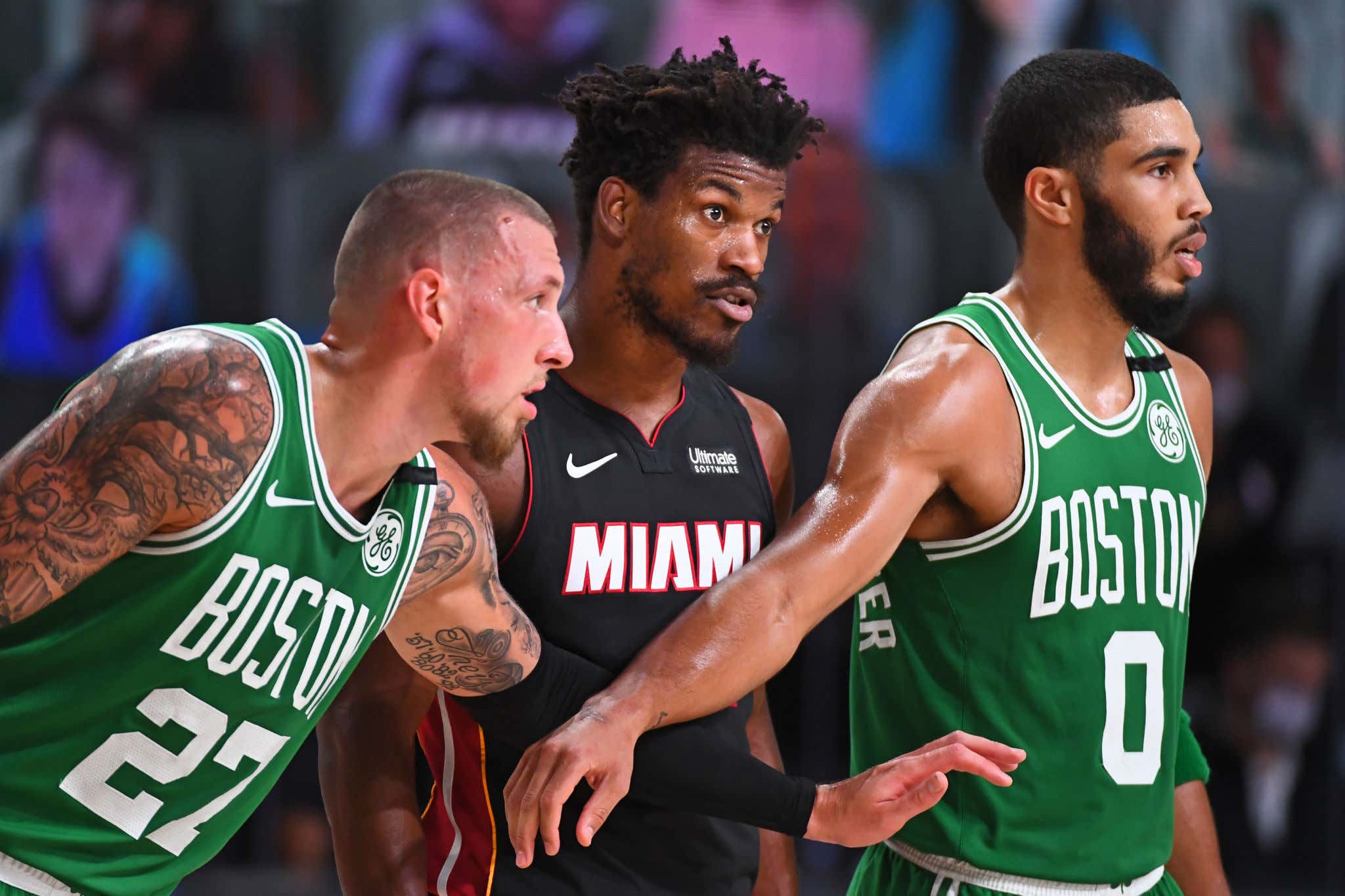 Today marks the first time a team will have the opportunity to punch their ticket to the NBA Finals. It's been a long road in these bubble playoffs where we've pretty much seen it all. Incredible basketball, insane prayer, upsets high drama, the past 38 days have absolutely lived up to the hype. Pour one out for all the hardos that aren't watching for whatever reason. They've missed out and then some.

I'll be fully transparent here. I'm nervous as fuck. I don't want to see the Celtics season end today. I'd actually prefer the exact opposite. This series against the Heat has made no sense. The points are dead even yet the Celts are one loss away from packing their bags because of their own issues. Blowing leads and turning the ball over. Playing with no energy. It's been so frustrating to watch. On the other side, it makes me physically ill how much I like this Heat team. They're 11-2 in the playoffs, are an incredible story filled with a bunch of likable guys. They have a great coach and Pat Riley is the ultimate Don. But they are ruining my life right now and frankly I do not care for it.

I said it earlier today, the Celts are going to need a miracle to win this series. Odds are most certainly not in their favor. But you can't win 3 until you win 1, so let's get you ready for tonight's tip.

Let me explain why you should feel great today as a Heat fan. Not just because you are up 3-1, that's a given. But you are up 3-1 and you didn't even play all that well in Game 4. This team shot just 42/27%!! Outside of Dragic's 3 3PM, no other Heat starter made more than 1. What are the odds that Butler/Crowder/Robinson/Dragic go 3-22 from three again? My guess is that does not happen for the second game in a row.

It gets better. The Heat shot just 4-16 on "wide open" threes in Game 4, and 2-12 on "open" threes. This team is too good to have another 6-28 performance on clean looks. What's crazy is they were 4-8 on "tight" coverage threes. So basically when the Celts played good defense MIA made almost everything, and when they were left wide open they almost always missed. That seems weird.

Then they have the unstoppable Bam P&R at their disposal. To put it simply, the Celts have no way of consistently stopping this play. Bam is abusing Theis in the roll to the point where Brad is getting desperate and has to play Timelord. That might take away the lob, but exposes the Celts when it comes to guarding the pick and pop guy behind the line. This playoffs Bam is averaging a ridiculous 1.35 points per possession on 74% shooting as the roll man. As a team this postseason, the Celts rank in the 57th percentile in defending the roll man in P&R. That feels like an issue and it's no surprise that set has been a problem all series.

With the Finals on the line, it would not shock me if the Heat did their best to hunt Kemba. Even if they try to hide him on Crowder, the Heat will do some switches or something to get a better offensive player on Kemba. We saw him guard Tyler Herro on 14 possessions in Game 4, look at how that ended up. My guess Brad adjusts there, but look for Kemba to be attacked early and often.

On the Celtics side, it's pretty simple. If they want to keep their season alive they have to do two things

1. Play with energy for a full 48 mintues

This was one of the most frustrating parts of Game 4. With a chance to steal all the momentum in the series, this team came out flat. I don't even know if calling it "flat" is the right description. They were lifeless, they looked like they didn't care. Offensively there was no life, almost half their shot attempts were threes, Tatum looked disinterested, the whole thing was annoying as hell. Then, once they actually climbed back into the game in the fourth quarter, it was the same shit. There is no excuse for having multiple defensive trips where your opponent gets 3 offensive rebounds. That's all heart. There is no excuse for nobody stepping up and shutting down Tyler Herro. Not on a team with so many plus defenders.

If today's game isn't enough to have this team locked in and motivated, then they aren't the group we thought they were. You can lose and still play hard. But it's so clear when this team gives a fuck and plays with energy and when they don't.

2. Take care of the goddamn basketball

You want to know why the Celts are in this position? Because they are careless with the basketball. How else do you explain 64 turnovers in 4 games? The worst part is a majority of these have nothing to do with the Heat's zone. The Celtics were absolutely prepared for it Game 4, yet they couldn't stop throwing the ball to the other team. Plays like this in the biggest moments were so goddamn frustrating

The fact that this team lost by just 3 while having 19 turnovers is what makes this deficit sting. Who knew that the one game they won they actually took care of the ball. What a crazy concept! Yet in two of their three losses they've had 20 and 19 turnovers. It's not fucking rocket science. It doesn't matter if you have more "talent" if you have a billion unforced errors. That is losing basketball and it's on the players. I'm sorry it just is. If you make lazy passes and careless decisions, your season will be over. Period.

I actually thought the Celts were mostly fine against the zone, they just couldn't make an open corner three when they needed it. We saw guys like Hayward/Smart go to the FT to help facilitate ball movement, we saw them drive and attack it. I'm not as worried about that as I am that they won't show up with the right energy and won't stop turning the ball over.

It's pretty clear that in terms of defensive matchups Brad needs to have Smart on Dragic to start, and then when Herro comes in that he needs to be his primary defender as well. If you have to sit Kemba so you can go with more of a defensive lineup to close then that's what you have to do. Roll out Smart/Jaylen/Hayward/Tatum/Theis if you have to. We're at the point now where if Kemba's offensive isn't lights out and he's getting roasted on the other end, you can't ride it out. You have to be quick to pull the plug once things get tight.

Which is the biggest problem this series. The Celts have been beyond pathetic in the clutch in this series. There's really no other way to say it. It's not even about their offense either. Defensively they are getting SHREDDED in the biggest moments. The Heat don't crack under that type of pressure. I can't say the same has been true about the Celts, so that obviously has to change if this is going to be another nail biter.

We'll learn a lot about this team given what we see tonight. If they play hard and still lose another close one, it's whatever. That's life. But if this looks like a team that has already quit and packed their bags it will only make things worse. You are not dead yet. You should still be fighting. Take it one day at a time and let's keep this series going.