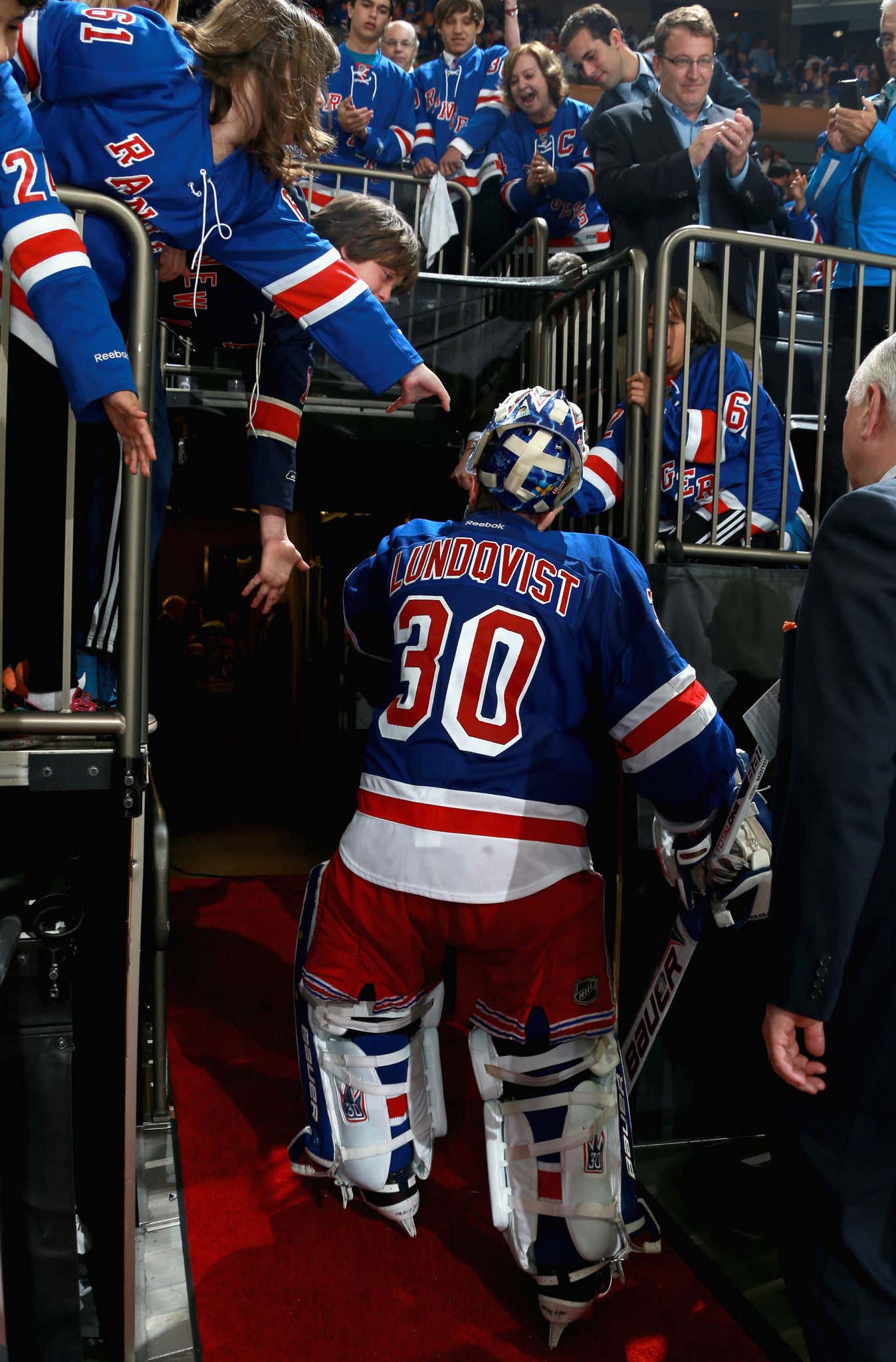 And there he goes. Our hero. Our workhorse. Our 11-time All Star, MVP finalist and 5-time Vezina Finalist ('11-12 winner). Our anchor. Our constant. Our inevitable slam-dunk HOFer. Our swagger.

This day was inevitable. Father Time spares no one, nor does the business of pro sports regardless of whether or not you've rightfully achieved everything you deserve. From the '16-17 season on, Henrik Lundqvist finally looked like a mere mortal playing behind a shell of a competitive squad and flat-out rebuilds. The reality slowly started to seep in that it was the beginning of the end and now that time has come. With Igor Shesterkin ready as the heir to the throne and a very capable backup in Georgiev, there's simply no more room on an up-and-coming Rangers team for a 38 year-old third wheel making $8.5M. A buyout was the only solution where both sides "win" as much as they could. The organization clears cap & roster space while Hank is free to look for playing time in hopes of catching lightning in a bottle before he hangs up his pads.

This blog isn't about the now though, nor is it about the future. It's about recognizing one of the greatest goaltenders to ever suit up - and that's on top of being the devastatingly handsome, supremely stylish, charismatic & highly charitable man he is off the ice.

From his rookie year in 2005 through '15-16, nobody did it any better. Most games, most wins, best save percentage among all goalies with even half as many starts as him, most shutouts and only Jonathan Quick had a better GAA (2.27 to 2.28) over that span. 2011-12 was Lundqvist's career year among a career of career years. 39-18-5, 1.97/.930 as a Vezina winner and Hart finalist. It was that postseason though where Hank's legend truly came to be.

The King's lone shortcoming is never hoisting the Stanley Cup - but that's through absolutely no fault of his own, no matter what nonsense Hank haters want to spew. His championship window was from 2012-2015 and yes, he played with some solid teams in front of him but make no mistake about it HE was the one who held the window open. First it was in 2012 vs Ottawa, down 3 games to 2 before backstopping a pair of one-goal wins to advance. Next was a 2-1 Game 7 W over the Caps before the Rangers fell to Jersey in the Conference Final. 2013 saw Lundqvist pitch back-to-back shutouts to erase a 3-2 series deficit against Washington before running into a Bruins buzzsaw. Dues were paid, confidence was built and over the next two years you could almost taste the champagne pouring from the most beautiful trophy in sports.

Catapulted by a Game 7 2-1 win over the Flyers and storming back from a 3-1 hole against Pittsburgh (which Hank allowed just one goal in each elimination-staving victory), the Blueshirts plowed through a Price-less Habs squad before squaring off against the LA Kings for all the marbles. What a fucking devastating series. Yes, NY only managed to win a single tilt but only because of #30 was this actually a matchup that could've gone either way. First game ended in OT thanks to a Dan Girardi "effort" that left Hank out to dry after he stood on his head to withstand a 20-3 Kings shot advantage in the third period & keep the game knotted. Next it was a high-scoring double-OT loss where the Rangers and Lundqvist were screwed on a pair of goalie interference calls/non-calls. After his offense provided exactly 0 goals in Game 3, Hank miraculously squeaked out a 2-1 win on the brink of elimination despite a 41-19 shot disadvantage. It all came crashing down in Game 5 though in heartbreaking fashion. Another double-OT that only got that far thanks to 48 saves, leaving an exasperated King face-down in his crease while the Kings basically celebrated on his body.

There was nothing more he could've done. 2.14/.928 peripherals over 25 playoff contests deserved a better fate - but he'd have one last crack at the Cup in 2015. After steamrolling the Penguins with four 2-1 wins and overcoming a second-straight 3-1 series hole by three straight one-goal margins, the Blueshirts squared off with the Lightning for a chance to advance for Cup redemption. Instead, with the series even at two a piece, Hank's Rangers gave him two scoreless efforts instead of two more shots at victory & slammed the window shut right on his regal fingers.

Lundqvist's four-year postseason run ended with insane numbers. Over 76 starts that somehow only manifested to a 39-37 record, he posted a 2.05/.930 line. He won SIX straight Game 7s with a .971 save percentage and was 15-4 in elimination games thanks in part to backstopping a pair of improbable 3-1 series comebacks. How did Hank end up ringless? Look no further than the 2.16 goals per game of support he was given over his legendary run. Sickening. Overall, he'll go down as one of the most clutch netminders to ever do it. Top-ten all time in playoff games, goals against, saves & save percentage. It's criminal none of these Rangers teams could chip in even a little bit to put the ultimate cherry on top of a magnificent career.

A career that sees him currently with a save percentage bested only by Hasek, Rask & Luongo among goalies with 500 games. For a guy who's job it is to stop as many pucks as possible, he was as elite as elite gets while donning a Rangers sweater. Take all these numbers. Add longevity despite an insane workload & more times than not, very little help. Mix in some good looks, charm, leadership & an enviable level of humanitarianism. That's an overall level of greatness you simply don't see. Anyone who watched Lundqvist's career should consider themselves honored. I know I am. You certainly deserved better, Hank, but we sure as shit didn't deserve you. All the hope, all the excitement, all the brilliance.