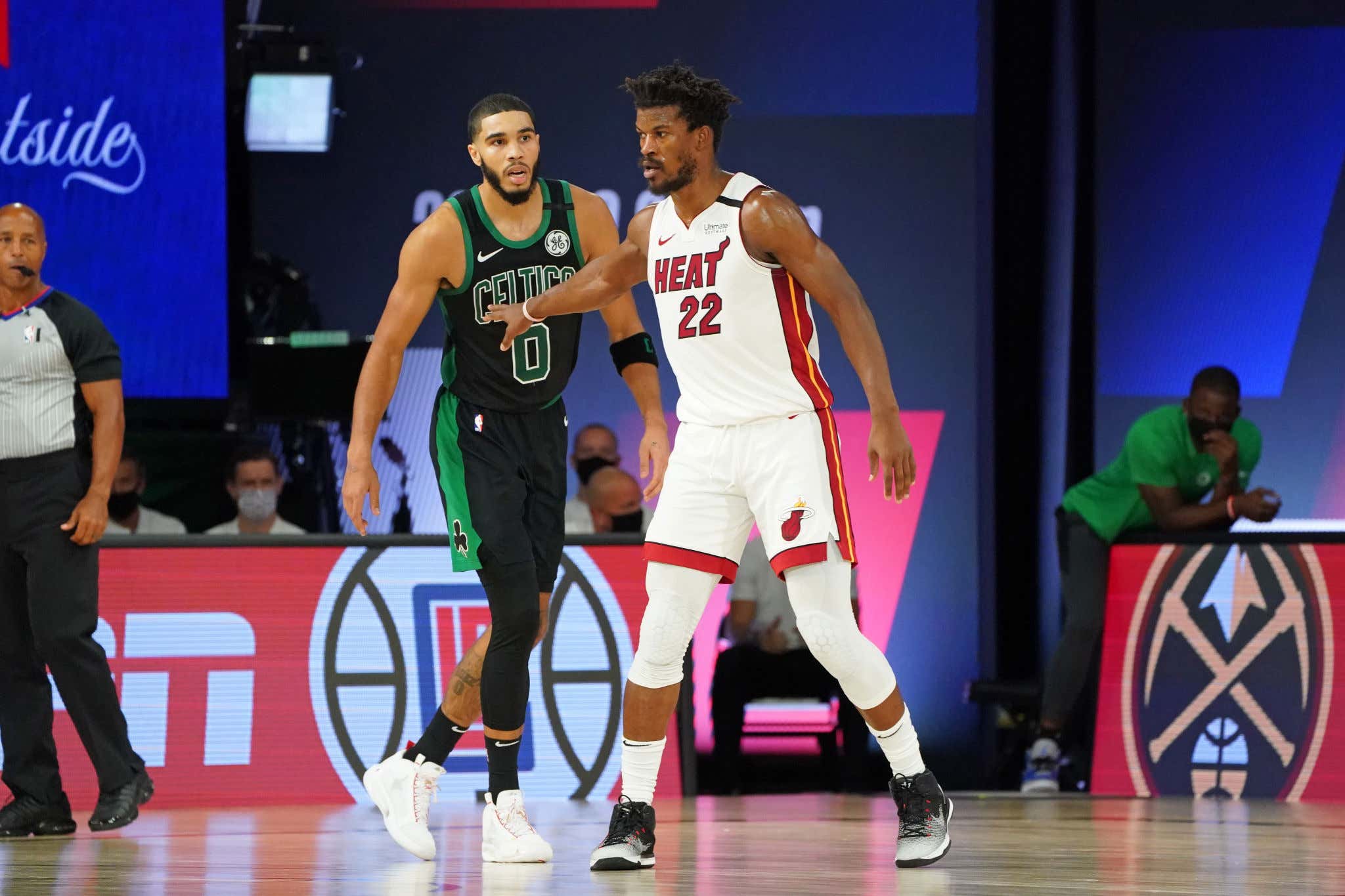 Can you believe its already been 31 days of the postseason? That feels crazy to me. I can only imagine what it's like to actually be in the bubble for this long because to me this whole experiment feels like its taken 10 years to get through. Now that we're in the Final 4 in both conferences we unfortunately are down to 1 game a day, but boy is it another doozy. Game 2 of the ECF is setting up to be another incredible battle just like Game 1 was, so let's get you all up to speed and ready for tip.

Just how hot are the Miami Heat? Well for starters they have 1 loss this postseason. That means they've won 9 of their last 10. It's hard to get much better than that. That one loss was a 3 point defeat in OT too. They've basically been unbeatable. On the flip side, the Celts have now lost 4 of their last 6. Granted 3 of those 4 losses were by 3 points or less, but you get the idea. One team is rolling, the other is trying to figure out how to not choke away playoff games in which they have double digit leads.

Heading into this series the consensus was that these were two pretty evenly matched teams, and Game 1 certainly backed that claim up. Both shot relatively the same from the field, both had virtually the same 3PM, there were 13 lead changes and 4 ties in their OT thriller. So now in Game 2, it's all about making adjustments to your opponent's adjustments. If I'm the Heat, I feel like you don't have to change much. Their zone worked to perfection, they did a great job of playing through Bam in the high post (9 assists), and the best part about their Game 1 win was their best shooter basically never played. I'd say the chances that Duncan Robinson has 4 fouls and only goes 2-7 from the floor again are pretty slim. They made 16 3PM without him, you know there's going to be a game where he lights it up. Why can't it be tonight? Even if you think someone like Jae Crowder maybe comes back down to earth shooting the ball (5 3PM), my guess is Robinson makes up for that difference.

The biggest difference to me in this game was something I touched on before Game 1. The Heat are so good in the clutch. Did you know they had a 125 Ortg / 88 Drtg / +36.8 net rating in the clutch moments of Game 1? That's insane and ultimately might be the difference. They don't panic, they take great shots offensively, and they have guys who are NOT afraid of the moment. If this is truly going to be a tight series, you have to love that as a Heat fan. They are built for tight series.

On the Celtics side, seeing as how they are down 0-1, it's on them to make all the adjustments. First and foremost, move the goddamn basketball. Brad talked about it, Ainge talked about it, the internet talked about it, they won't stand a chance against this Heat team passing the way they did in Game 1. Just 24 assists on the night, Smart only had 1, and we all saw how bad the offense looked down the stretch where they focused too much on iso ball and didn't move the rock. The second adjustment they need to make is to not shit their pants every time the Heat go to their zone. It was wild they were so unprepared for it, mostly because it was not the first time they've seen it. I don't know how else to say it other than the Celts clearly forgot how to play basketball every time MIA went to it.

It goes without saying that Kemba obviously has to be much better to start these games. The Heat are too good to try and win while not having Hayward AND not having Kemba. We saw that when he looked for his jumper late in the fourth/OT he was able to get any shot he wanted, so I need him to be more aggressive from the jump. I'd also like to see them not forget that Jaylen Brown exists. Game 1 was basically a back and forth between Kemba/Tatum despite both not being able to make shit in the second half. Jaylen needs to be more involved, period.

Finally, please have some sort of offensive strategy to close games. This has been an issue for Brad the last two series. This whole dribbling until there are 8 seconds left on the shot clock with everyone standing around is not going to cut it.

I wouldn't say this is a "must win" for the Celts, but it's about as close as you can get. The Heat are playing so well I just don't see how they would lose 4 of 5 if the Celts were to go down 0-2. Now if you'll excuse me I need to go throw up I'm so goddamn nervous.