A little fun fact about your pal Clem here. The first concert I ever went to as a sprout was Aerosmith at Jones Beach with my dad. It wasn't because I was some old soul like Robbie Fox that appreciated good music  from a great band on albums that came out before I was born. It was because Get A Grip and these music videos dropped right as I was entering that age when kids fall in love with rock and roll as well as music videos with Hall of Fame smokeshows in them.

It was at that little amphitheater in Wantagh that I learned a lot of other important lessons, such as what blackout drunk Long Islanders looked like, that Dream On was on roughly 100 straight Aerosmith albums, and the smell of what I would later in life found out was the then completely illegal substance commonly referred to as marijuana.

Anyway, I rode the emotional rollercoaster with Alicia Silverstone throughout these three videos. I was already scared of girls due to the hormones that raged through my body when Get A Grip dropped. But bad girl Cryin' Alicia Silverstone PETRIFIED me with her perfectly 90s attitude and flannels. Just a bad ass mother who don't take no crap off of nobody. Cryin' Alicia was so badass that today was the first time I saw her flipping the bird at the end of this video uncensored. 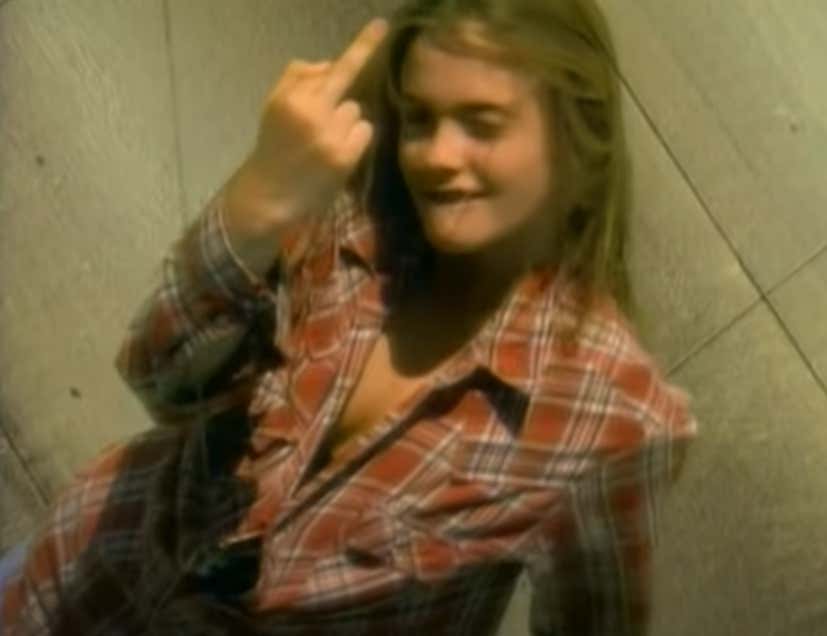 Who the fuck surprise bungee jumps on their boyfriend? Cryin' Alicia Silverstone, that's who.

Next up, we have Amazing Alicia Silverstone.

Amazing Alicia started off rough around the edges yet again. But thanks to some of the weird artistic interpretation of what virtual reality would look like, complete with sensory technology that could cause someone to think you pissed/came your pants, she was softened up using software in what is my personal favorite song of the trilogy and once upon a time my favorite song in the entire world. That's Clem Fun Fact number 2 I suppose. I don't know if Amazing Alicia Silverstone was the first person really turned on the light in me that made me care more about girls than pretty much everything in my life outside of sports. But she is on a very short list.

Last but not least we have Crazy Alicia Silverstone.

This was my least favorite song and video of the trilogy, which admittedly is judged on a Kershaw level curve because it's still a fucking awesome song and video. Finding out that Liv Tyler came from the same gene pool as Steven Tyler was a fact that blows my mind til this day. I was going to give a score for each video but then I remembered I tweeted out what is essentially this blog in Twitter form once upon a time.

I threw a Hail Mary to see if there was an Alicia Silverstone highlights reel from these videos and wouldn't you know, there is one!

Outside of likely being the cause of the degradation of humanity as we know it, maybe the internet isn't so bad after all.

I'll finish the blog with Livin' On The Edge and Eat The Rich since they were the other two videos off the absolute BANGER of an album that was Get A Grip that had the lowkey perfect 90s album cover.