Psychologists say 'of all the senses our sense of smell is most closely linked with memory' but I never gave that much thought until I got out of the military. It happens less now and sounds cliche, but sometimes I'll be walking down the street when a small whiff of something hits me & just like that I'm cleaning office shitters on Camp Pendleton (shout out Simple Green) or am back on a Persian rug sipping tea in Afghanistan. For me at least, mil memories sparked from certain scents can be stop-me-in-my-tracks visceral.

Thanks to ZeroBlog30 I know I'm not alone in that because when we posed a question about military-related smells we got nearly 700 replies; most hilarious & many very specific.

Cobra "65" is always a treat, but unfortunately there's one particular olfactory memory-inducer that's a bit more serious and that too many veterans have in common.. 'burn pits'. 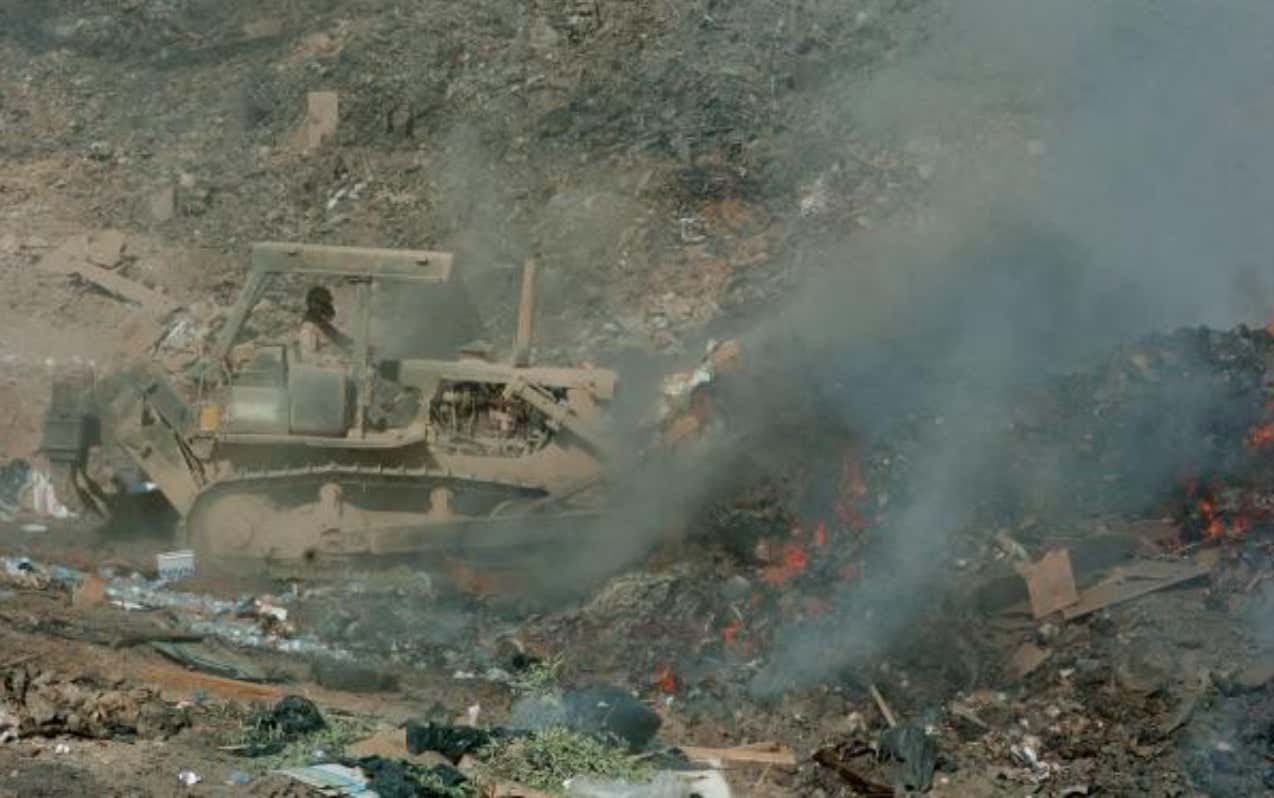 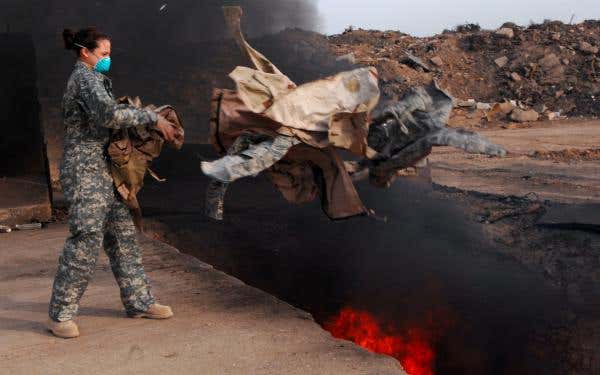 With no real garbage removal system on deployments, burn pits were where we incinerated pretty much anything & everything to get rid of waste. A U.S. VA memo lists "chemicals, paint, medical and human waste, metal/aluminum cans, munitions and other unexploded ordnance, petroleum and lubricant products, plastics and Styrofoam, rubber, wood, and discarded food" as common items thrown in the burn pits, and often times their toxic smoke would be wafting all over us.

On larger bases these jet-fuel soaked pits could be larger than football fields, or on smaller outposts it could be a barrel that you had to poke with a stick now & then. One FOB (forward operating base) I was on had a beach chair next to a 10x5 ft. pit & Marines had to take shifts 'watching the pit' to make sure it stayed lit, didn't get out of control, (and so the Afghan Army fellas didn't toss any gear into it that they didn't want to carry). Marines on that pit duty would be sitting by the edge in a haze of black smog while another Marine walking by would casually toss a wag bag (seen below) full of their heavy, MRE-laden butt nuggets into the flames. 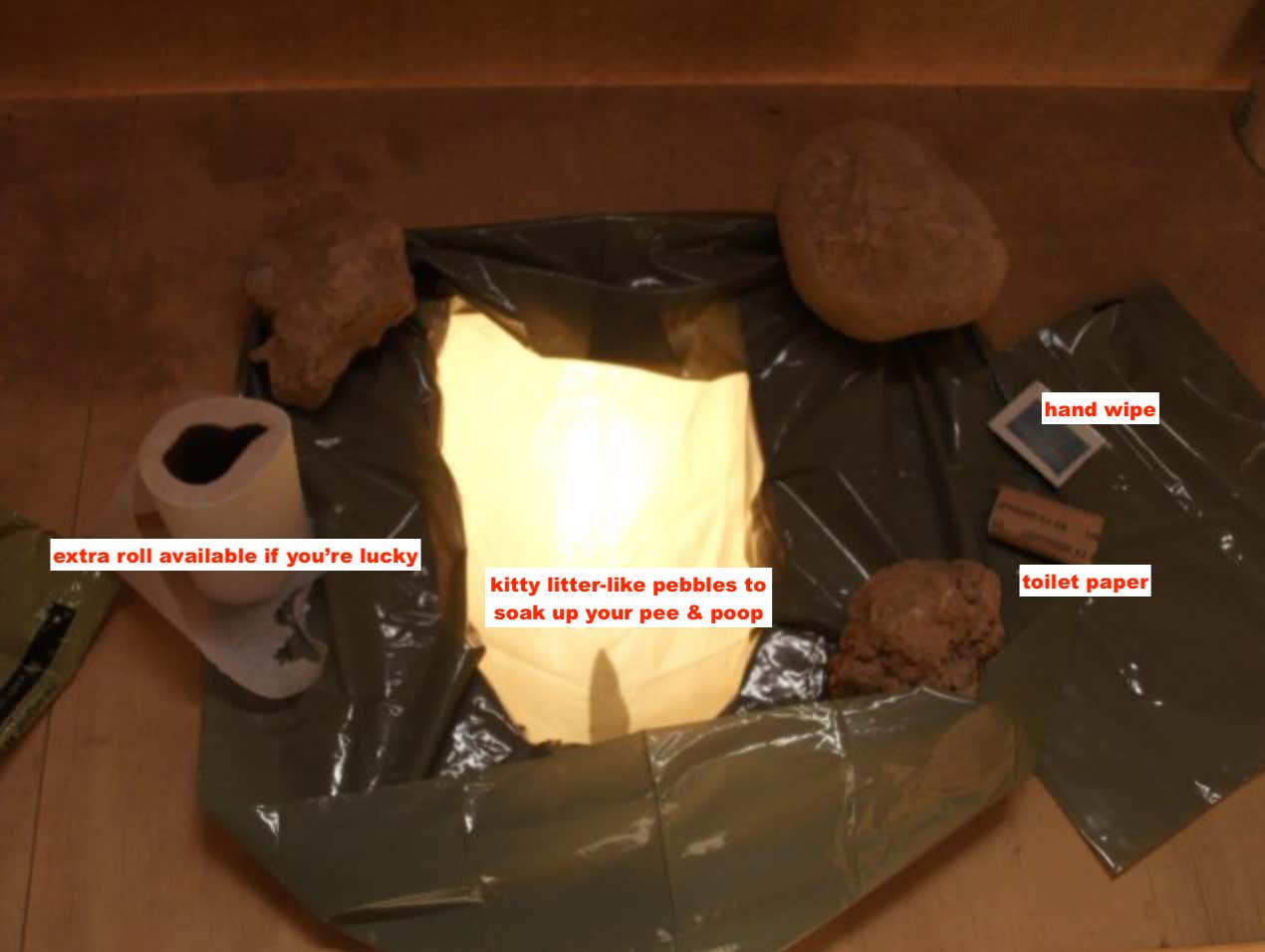 I went to my old FB albums to find some classic 'make this about me!' examples of my own proximity. The tiny burn pit at this location was right behind that little hut in the background where we slept, and the 'toilet' was on the outside wall to the left of it & protected from pop-shots & wandering eyes by sandbags… 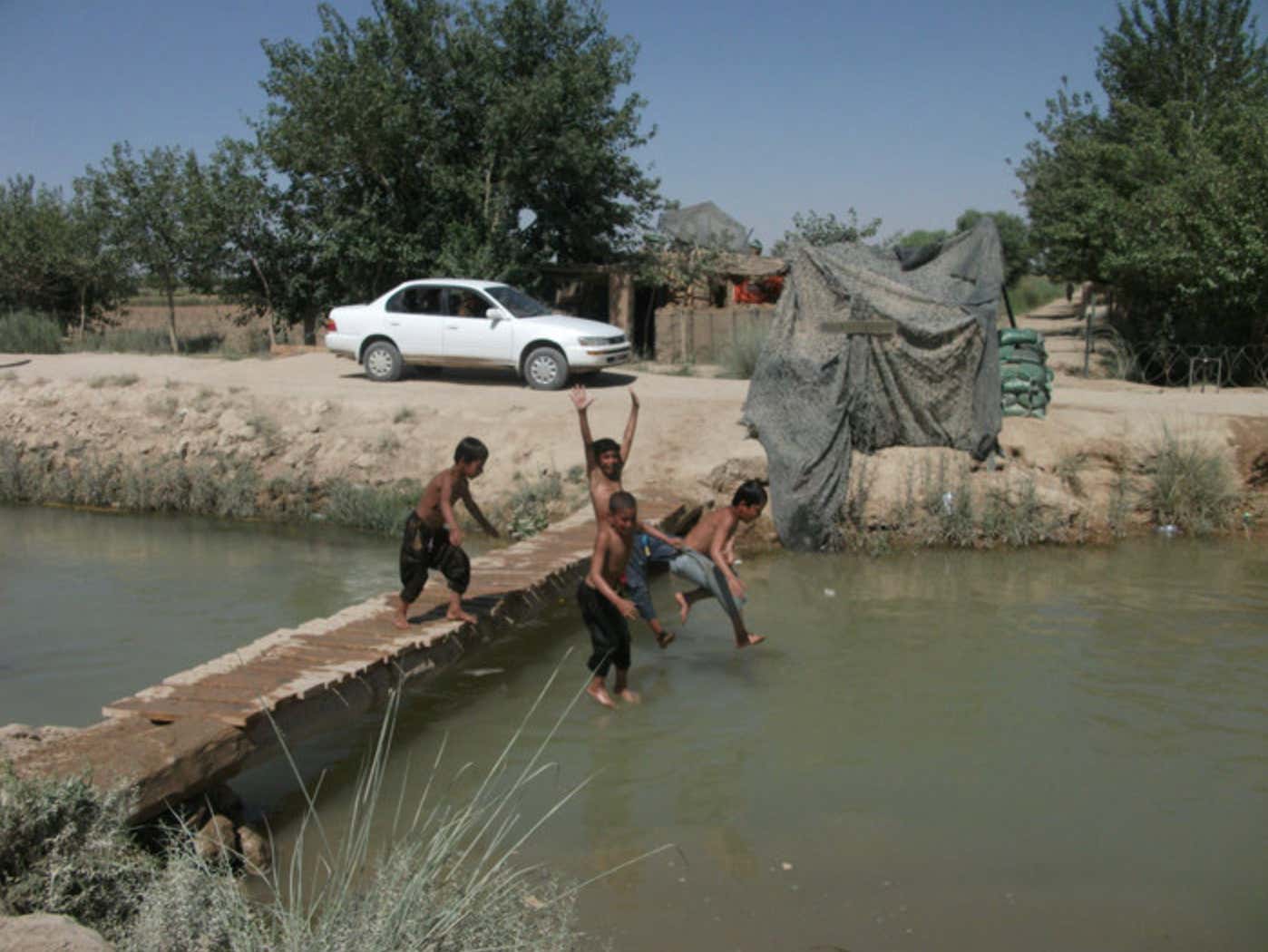 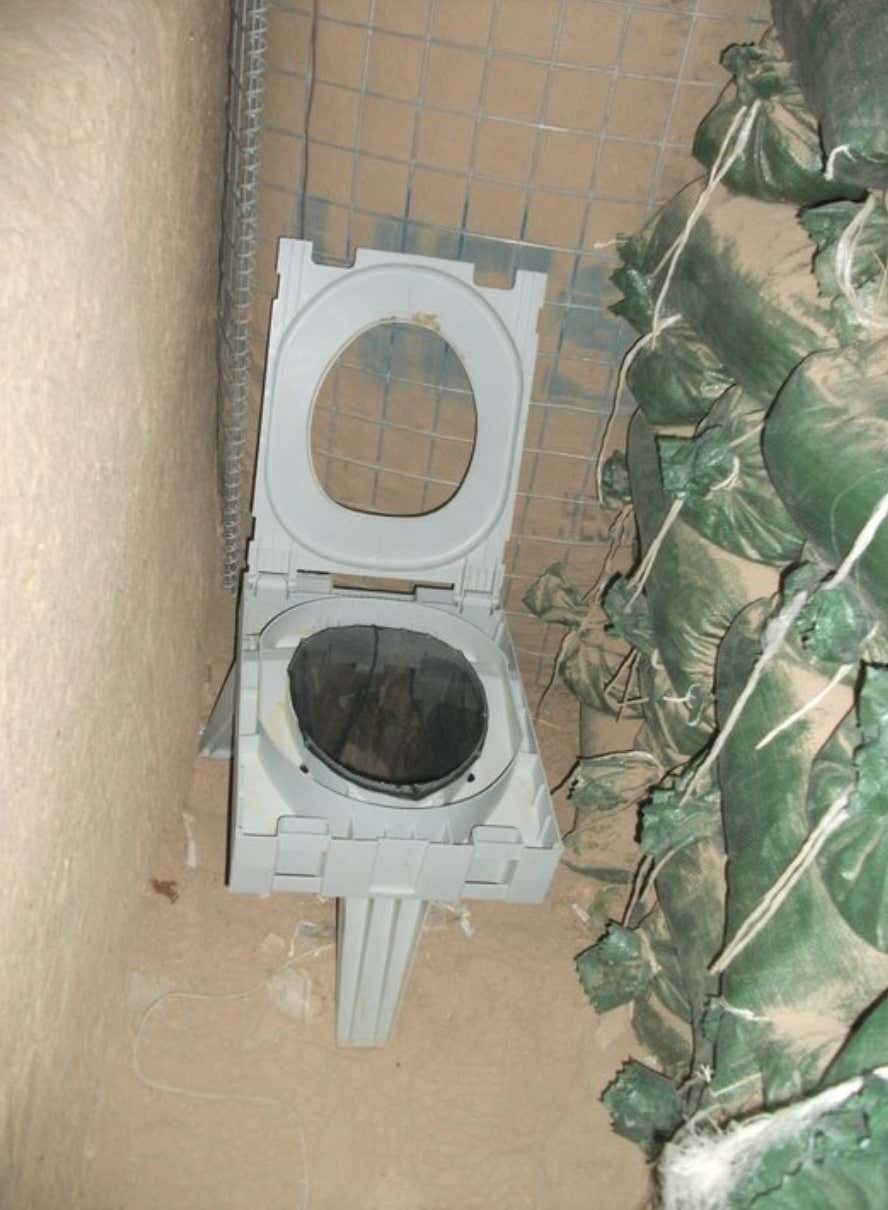 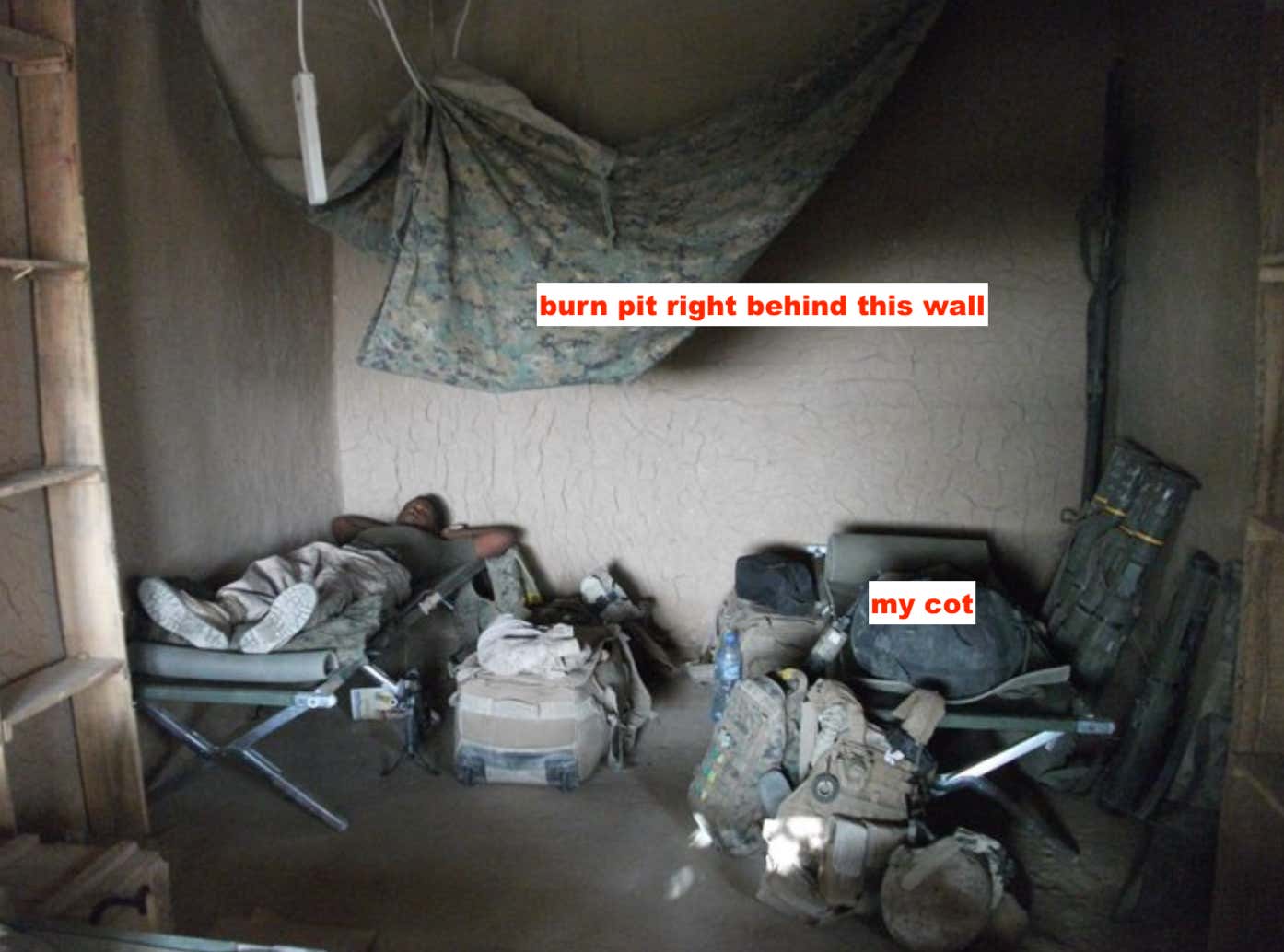 Shit in the bag while desperately holding in farts because you know the overwatch-Marine on the roof can hear you, toss it around the corner into the pit & get excited if you land it right on the fire, go back to arguing about Spades in the fly-filled hut. Mission accomplished.

On top of that, most rural areas like ours - a village called Marjah - had no sewage or garbage system either. So when out on patrol it wasn't uncommon to walk past poop piles or burning trash from the bazaars either. 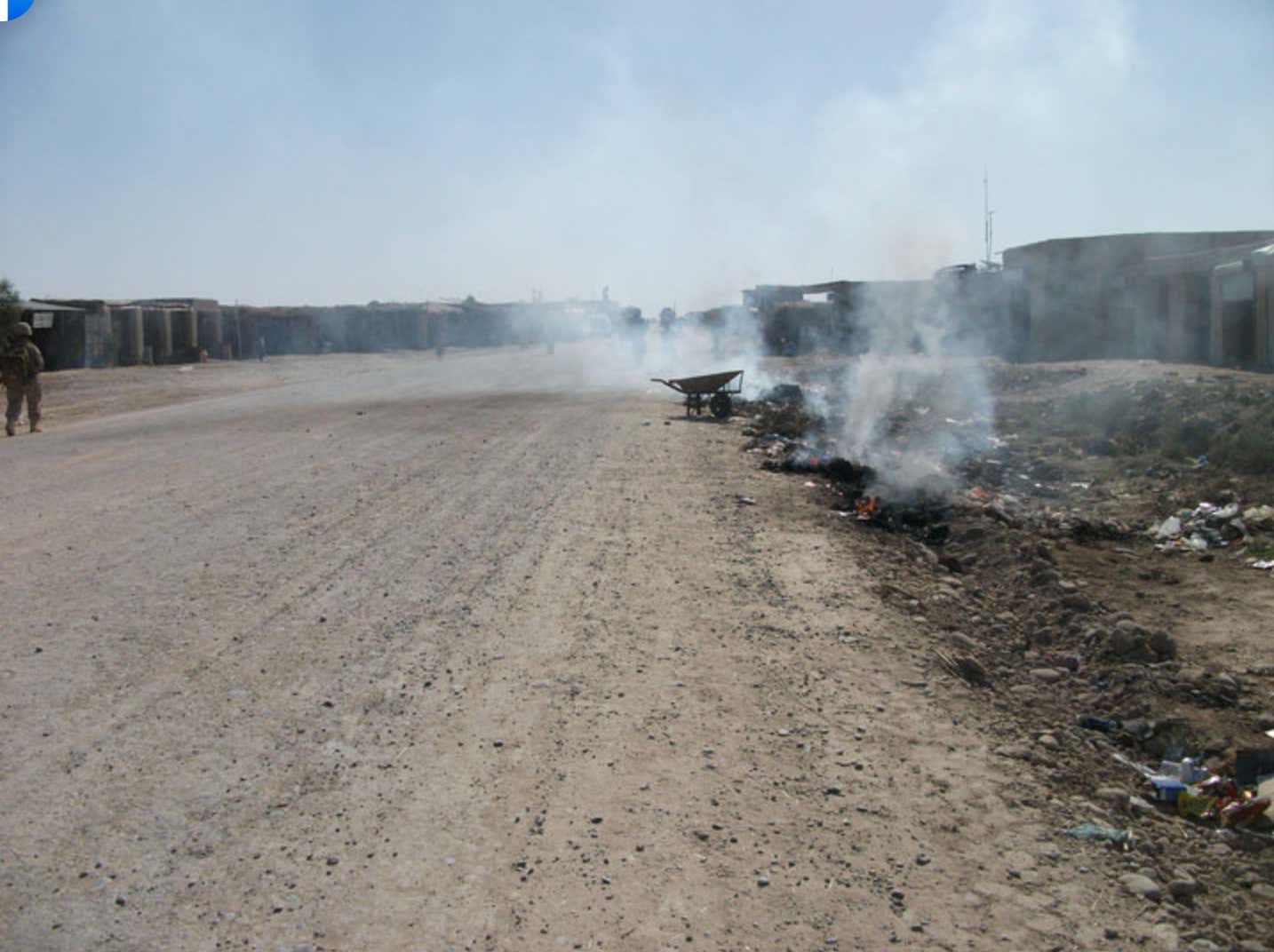 At the time all this burning was an almost constant but small nuisance that was never addressed & one we quickly learned to ignore. Eventually the melted plastics, chemicals & whatever else blended in with the rest of the suck. There were bigger fish to fry and most Marines weren't directly involved with pit maintenance/logistics/whatever so they didn't mention it later on when applying for health benefits. Yeah, nobody thought that stuff was good for us but we were doing our jobs & we didn't know what we didn't know.

Only now, years later as the effects are emerging and veterans are getting sick and dying, is it back on my radar, and even then the main reason is because of the tireless efforts of Jon Stewart. Yesterday (Tuesday) he was down in D.C. with a coalition of other advocates to lobby for the passage of a new bill which will 'list burn pit exposure as a presumptive condition for any service member who fought in the wars in Iraq and Afghanistan'. That'd mean no more having to fight tooth & nail to get care for issues the government knows is associated with the burn pits they instituted in the first place over safer but more costly methods.

I've written before about how Stewart is one of my heroes and every time he's in the news again it only reaffirms my feeling. The emotion in his voice there is real. Anyone can say they love & support The Troops™ but he whole-heartedly walks the talk.

Over a year after helping 9/11 first responders receive access to a crucial compensation fund, the comedian and advocate has turned his focus toward helping the nearly 200,000 veterans who've said their health was compromised by their exposure to burn pits while serving overseas.

"The parallels are incredible. I'd say the only difference between what happened with the 9/11 community and what's happening with the veteran community is the 9/11 community was injured by toxic exposure from an enemy attack," Stewart said in an interview with Fox News' Investigative Unit.

"The veterans of Iraq and Afghanistan have been injured by the United States. We did this to ourselves. The smoke, the toxins, those pits were dug by contractors hired by the DOD. They knew about it. Their own reporting, internal reporting, shows the air quality, shows the variety of toxins" they were exposed to.

If you're a post-9/11 veteran check out the CNAS site (CNAS = independent, bipartisan, nonprofit org that performs research/analysis to elevate convos on national security) and click on Iraq or Afghanistan, the years you were there, and you can see your subsequent exposure level. Mine is real comforting: 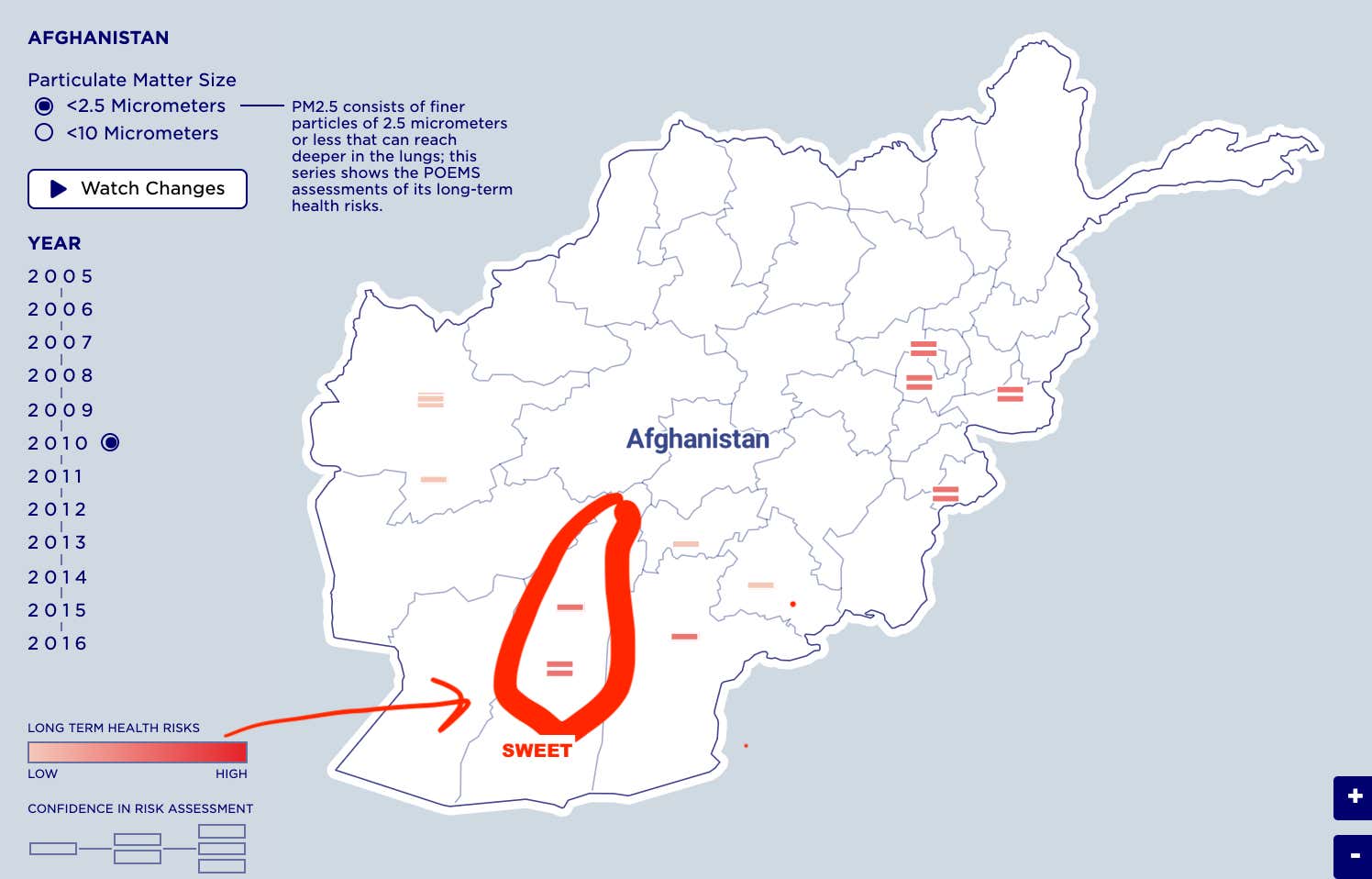 If you think you fall within the range sign up for the Burn Pit Registry, and if you need help with your benefits check out orgs like DAV. Even if time has passed it's not too late & they can guide you through the red tape & bureaucracy of the claims process. A lot of veterans fall into the 'well others had it worse, I shouldn't say anything about my experience' and that can't be further from the truth. Your info & care matters as much as anyone else's.

If you're a civilian who wants to help, put pressure on your representatives to get moving on 'The Presumptive Benefits for War Fighters Exposed to Burn Pits and Other Toxins Act'. (Easy to remember, right?! ha ha) According to Connecting Vets it will help us,

…cut through the red tape to switch the burden of proof from the veteran to VA. The legislation would require VA to provide benefits to veterans exposed to hazards during service who have one or more of the dozen of diseases included in the scope of the bill, such as "cancer of any type, chronic bronchitis, emphysema, lymphoma, Granulomatous disease, pulmonary fibrosis, sarcoidosis, asthma diagnosed after service" and more.

Help us get back to remembering the military smells that really matter like 'vomit in the barracks lounge', 'low grade strip club', regret' and/or 'way too much Axe body spray'.

We'll be covering this more on Friday's episode of ZeroBlog30 and in the meantime you can check out other episodes here: