Often times obituaries are straightforward, bare bones & very 'vanilla', and that's okay & understandable. People want to be respectful, and even if the one being remembered was a wild hoot and extremely beloved for their personality, those in charge of the obit simply aren't in the mood to make light during that heavy time or it would cause drama in the family if they tried to… Grief is processed in a wide array of ways & speeds and is an expert in tangling communications.

That's why I think fun, wacky & unique obituaries go viral. It's refreshing to be given a genuine picture that isn't buttoned up, one that sort of laughs in the face of death from beyond the grave and takes a little air out of the solemnity of something that's eventually coming for all of us. If they could find amusement in the end, so can we.

And at least for me, it gets me thinking about the real ones I'd write for my relatives & friends. The things that made them unique & wonderful that makes them so missed now, things that I want to shout from a mountaintop for everyone to hear. EVERY YEAR DOWN THE SHORE MY UNCLE PAT ROLLED AROUND IN THE SAND LIKE A SEAL TO MAKE US LAUGH AND HE WAS GREAT (TERRIBLE) AT PRANK CALLING US AND HE WAS THE BRIGHTEST BEAM OF SUNSHINE!

So where was I… Ah - Earlier this year Clem wrote about Randall Jacobs AKA 'Bunky' of Phoenix, AZ who 'lived a life that would have sent a lesser man to his grave decades earlier'.

Uncle Bunky burned the candle, and whatever else was handy, at both ends. He spoke in a gravelly patois of wisecracks, mangled metaphors, and inspired profanity that reflected the Arizona dive bars, Colorado ski slopes, and various dodgy establishments where he spent his days and nights. He was a living, breathing "hang loose" sign, a swaggering hybrid of Zoni desert rat, SoCal hobo, and Telluride ski bum.

And Nate told the story of the late, great Sybil Marie Hicks who, after giving fun shout-outs to her kids & grandkids and lovingly roasting her husband (a horse's ass), also noted,

If you go on a Google search you'll find all sorts of fantastic remembrances like these that buck the norm & though I don't judge the traditional way, I really I love these.

So now from Reddit I bring you the recent obituary of Holly Blair, which is a bit of a witch project: 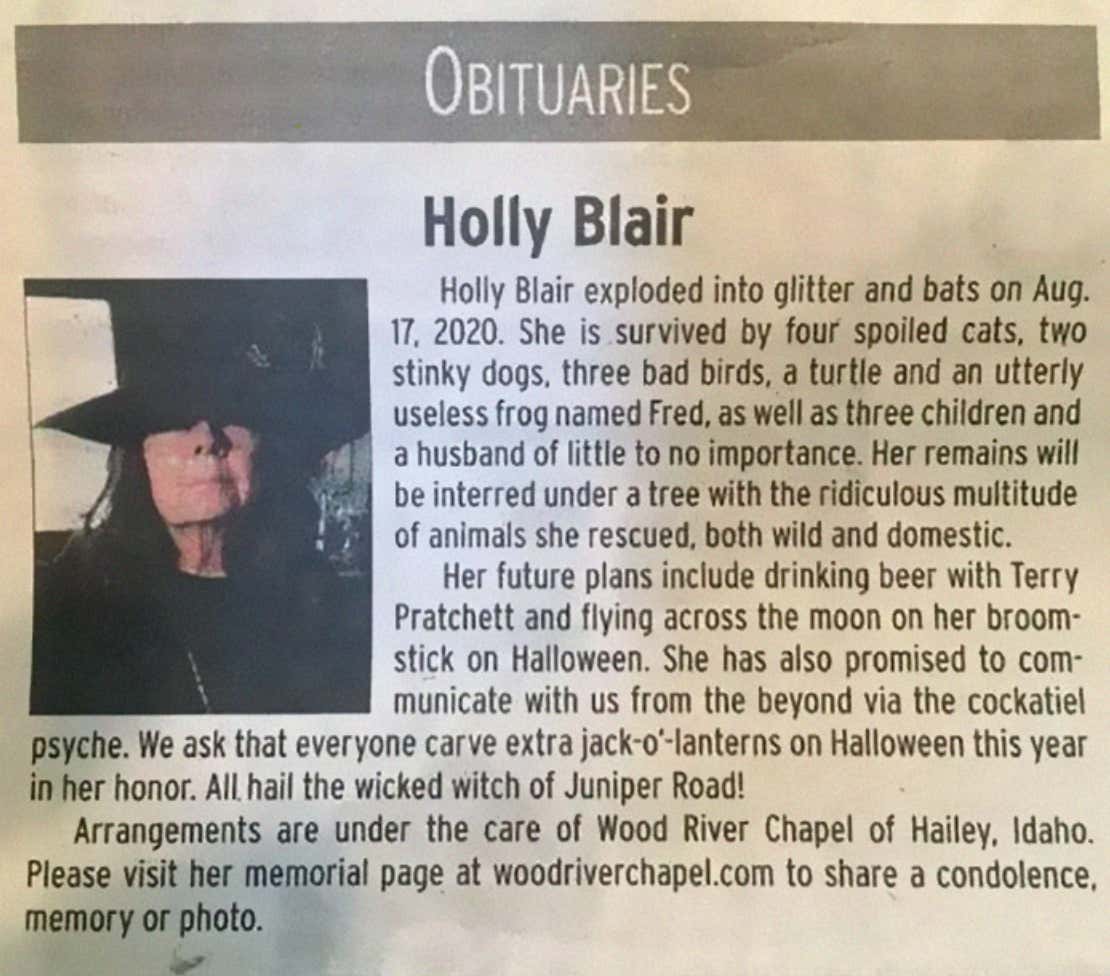 Holly Blair exploded into glitter and bats on August 17, 2020. She is survived by four spoiled cats, two stinky dogs, three bad birds, a turtle and an utterly useless frog named Fred as well as three children and a husband of little to no importance.

Her remains will be interred under a tree with the ridiculous multitude of animals she rescued both wild and domestic.

Her future plans include drinking beer with Terry Pratchett and flying across the moon on her broomstick on Halloween. She has also promised to communicate with us from the beyond via the cockatiel psyche. We ask that everyone carve extra jack o’lanterns on Halloween this year in her honor. All hail the wicked witch of Juniper road!

Holly was clearly someone who made life more fun & interesting for everyone around her and it's striking a chord as the funeral home's listing has been shared nearly 1,000 times on FB at this point. Even in death she's keeping the magic going.

Consider the extra pumpkins carved this year. Wherever you are, party on, Holly. Party on.