Just a few days removed from Novax Djokovic's stunning default from the US Open, we're down to the final 8 to crown a new champion. None of the remaining field have ever won a grand slam, but come Sunday that will change. I'm rarely one to put in a future bet, but I think given how wide open the field is, this is a worth while opportunity. 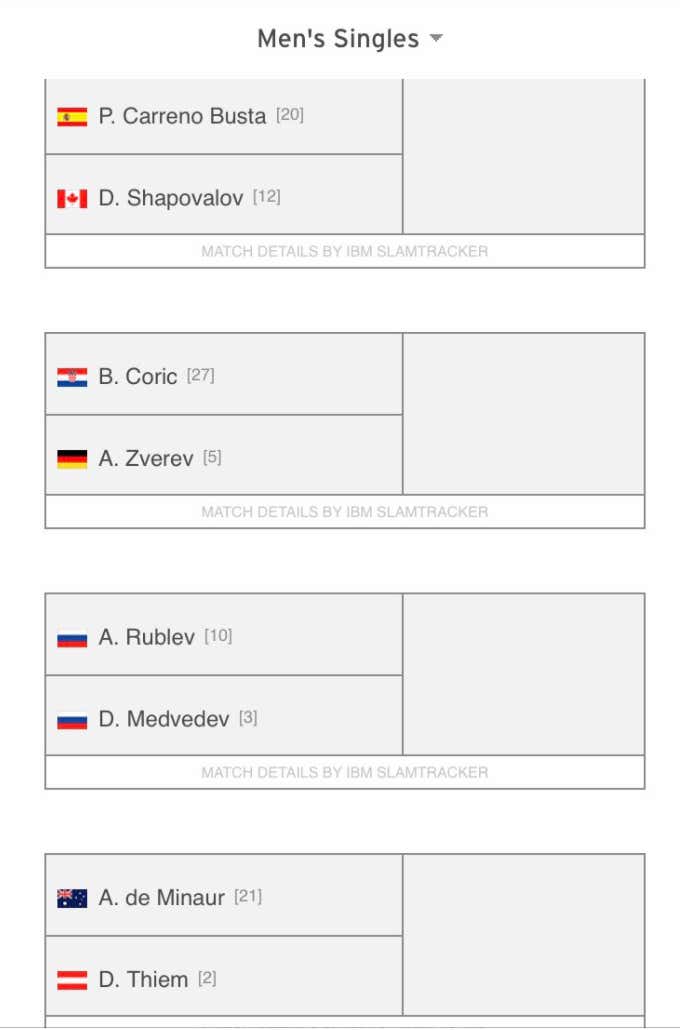 And here are your remaining odds via (via William Hill)

Let's start off by throwing out the guy's who have no chance of winning. You are lighting money on fire if you take Coric or Carreno Busta. I also don't think Alex de Minaur has anywhere near enough fire power to beat Thiem. He'll get broken by the Austrian all match. He'll maybe break Thiem a few times himself with his speed, but it won't be good enough. That erases 3 guys right off the bat.

Danill Medvedev is the new guy to beat right now. After coming off a US Open runner up finish last year, he smells blood in the water with none of the big 3 in the mix. With Dominic Thiem likely waiting in semis, taking Danill at +150 just isn't worth it. Is he the best tennis player left of the 8? Probably, but I'm not writing a whole blog to just take the odds on favorite. I will also say I wouldn't be stunned if Andrey Rublev gives him some trouble in the quarter finals. I was stunned what the young Russian did to Matteo Berrettini yesterday, dispatching him in four convincing sets. If Rublev was on the other side of the bracket I'd consider going +1100 on him, but his road is too tough. Going through potential Medvedev, Thiem, and one more stud. It's a pipe dream if anything.

Dominic Thiem is awesome. When he's on the returning end he's usually a million feet behind the baseline so he can take away his opponent's big serve. You watch him play and you laugh, but his strategy works. The dude just breaks you down in a calculated fashion. He's the smartest player remaining in the field, but what it comes down to with him is first serve percentage. Can he avoid his second serve enough to not give away service games? I actually wonder why he doesn't have the best odds out of the field. He's 2-0 lifetime against Medvedev on hard court and has the easiest quarterfinal matchup of the two. If and when they face in the semis I'm riding Thiem no question. Again I'm not writing this blog to give you a pick of a small favorite to win it all. If you want to go that rout I'd go Thiem at +225.

On the other side of the draw there are two names that jump out. Alexander Zverev has maybe the most talent of anyone in the field. He's tall, serves like a motherfucker, and has the speed and power to win long rallies. Based off the hype surrounding him entering the pro circuit it's stunning the 23 year old has yet to reach a slam final. This certainly will be the best chance he's ever come across, but will the moment get to him? Zverev is the biggest choke artist I've ever seen. His greatest enemy is himself. Watch him double fault once and it'll turn into double digits before you blink. His issue with his serve has caused him to become at times a laughing stock in the sport. Sure he can easily erase those mistakes with un-returnable 130 mph+ aces, but I'm willing to bet on the biggest stage of his career he won't be able to control his nerves. I could definitely see Coric pulling off the upset in the quarters. Coric isn't good enough to take down any of the likes of Medvedev/Thiem, but he can beat Zverev. I think taking Zverev at +450 is lighting money on fire as well, even if he has all the talent in the world.

There's one name I haven't mentioned yet and it's the man I'm picking to take home the hardware: Denis Shapovalov. I think El Shapo at +1000 is about as good of value as you can find in this tournament. The 21 year old looked amazing beating the 7 overall seed David Goffin in the round of 16. His serve is untouchable when it's on, and his ground strokes are lethal when he's not too in over his head. Shapo's biggest issue is his love for hitting winners. You'll look at the final stats of a match and see just as many winners as unforced errors. The man goes for it almost every single time. It's fun as shit being in Shapo's corner on a bet with the shots that he hits. I personally think he's going to run through Carreno Busta in the quarters tonight. That will likely leave Zverev in the semi. Expecting a few tie breaks there, but Shapo has the edge in my book to best him in the mental game. Shapovalov has the easiest draw to get to the finals the way I see it, and that alone is worth the +1000 gamble. Will he be a dog in the finals? If he faces Medvedev or Thiem no question, but having a +1000 in the US Open final with the game that Shapo has. I love the value on that bet.

Knowing my luck he'll lose to Carreno Busta somehow tonight and this blog will get laughed at, but I stare at this draw and the odds and love Denis' chances. If you want to take a more sure thing then go with Thiem, but if you wanna sprinkle and have something fun to root for this week take Denis Shapovalov to win the 2020 US Open. Didn't think I'd be typing that out anytime soon with how much the Big 3 dominant these events, but 2020 is one wild year and Djokovic is home already. Let's have some fun.

Watch a few minutes of the shots this dude hits and tell me you don't wanna bet on him. His jump back hand is electric.