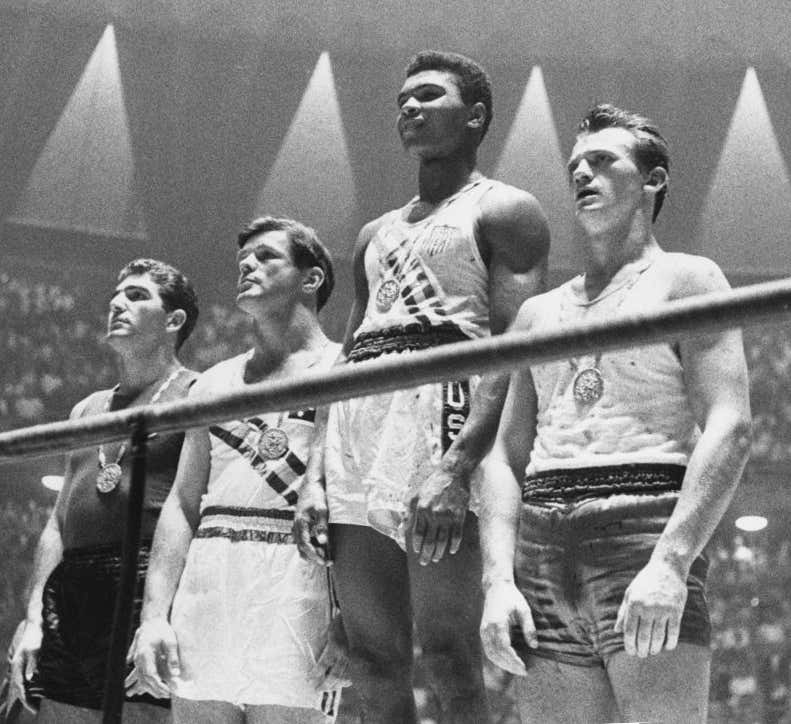 Cassius Clay is one of three Americans to win a Boxing Gold Medal at the Summer Olympics in Rome. The 18-year-old from Louisville scored an impressive unanimous decision in the light-heavyweight division over three-time European champion Zbigniew Pietrzytkowski from Poland. Anthony Madigan of Australia and Giulio Saraudi of Italy won the Bronze Medals. Upon returning to the USA, Clay would throw his medal into the Ohio River after being refused service. He was given a replacement medal after lighting the Olympic Cauldron in 1996.

Cassius Clay Jr. was born on January 17, 1942, in Louisville, Kentucky. He began learning the sport of boxing after his bicycle was stolen when he was 12 years old. Clay quickly took to boxing, winning his first amateur bout. Over the next few years, Cassius Clay compiled a record of 100-5, winning six Kentucky Golden Gloves titles, two national Golden Gloves titles, and the Amateur Athletic Union championship.

Returning home, Cassius Clay made his professional debut less than two months later, beating Tunny Hunsaker on October 29, 1960, in Louisville. Cassius Clay would quickly become one of the biggest stars in boxing and won the Heavyweight championship on February 25, 1964, in Miami by beating Sonny Liston. A day after his title win, Clay announced that he had become a Muslim and would change his name to Muhammad Ali.

Muhammad Ali would go on to forge one of the greatest careers in boxing, winning the heavyweight championship three times, while compiling a record of 56-5 over a 20-year career.