He did it you cocksuckers. He did it.

As we all know, Dave intended on jumping in the river the second he lost his bet. His schedule just never allowed him to.

Until Donnie came to town, we were lucky enough to meet up with the gracious Chicago Sup guys who took us out on their boat to e-foil/surf, and we cruised down the Chicago River.

When we planned out the jump, we took into consideration where the best part to take the plunge would be. Dave couldn't jump in just anywhere. It had to be memorable.

Up by the mouth where the water is somewhat green. ish?

Up by the Wabash bridge, next to the Trump building where he'd get the most eyeballs?

Nope. Dave plays for the love of the game, not the notoriety.

How about one of the filthiest, most vile spots on the river?

A spot that his rival Carl's favorite 90s miscellaneous/alt band Dave Matthews Band dumped 800 pounds of human shit into said river to be exact? Underneath the Kinzie Street bridge?

We directed our captain onward up/down (more on this in a second) the river towards the north branch and the Kinzie Street Bridge. 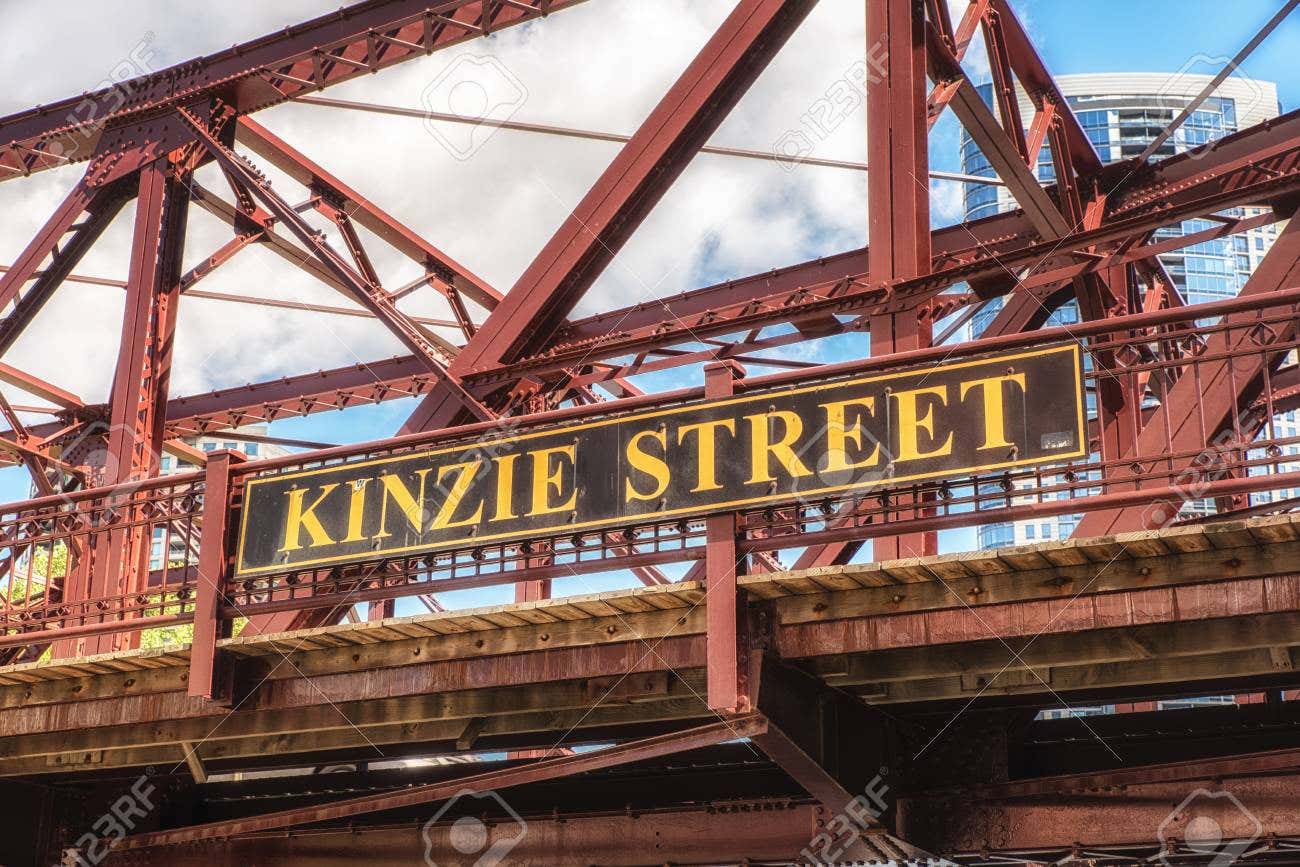 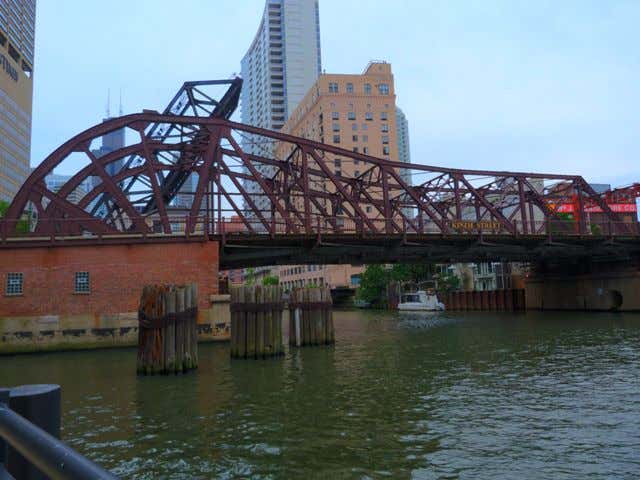 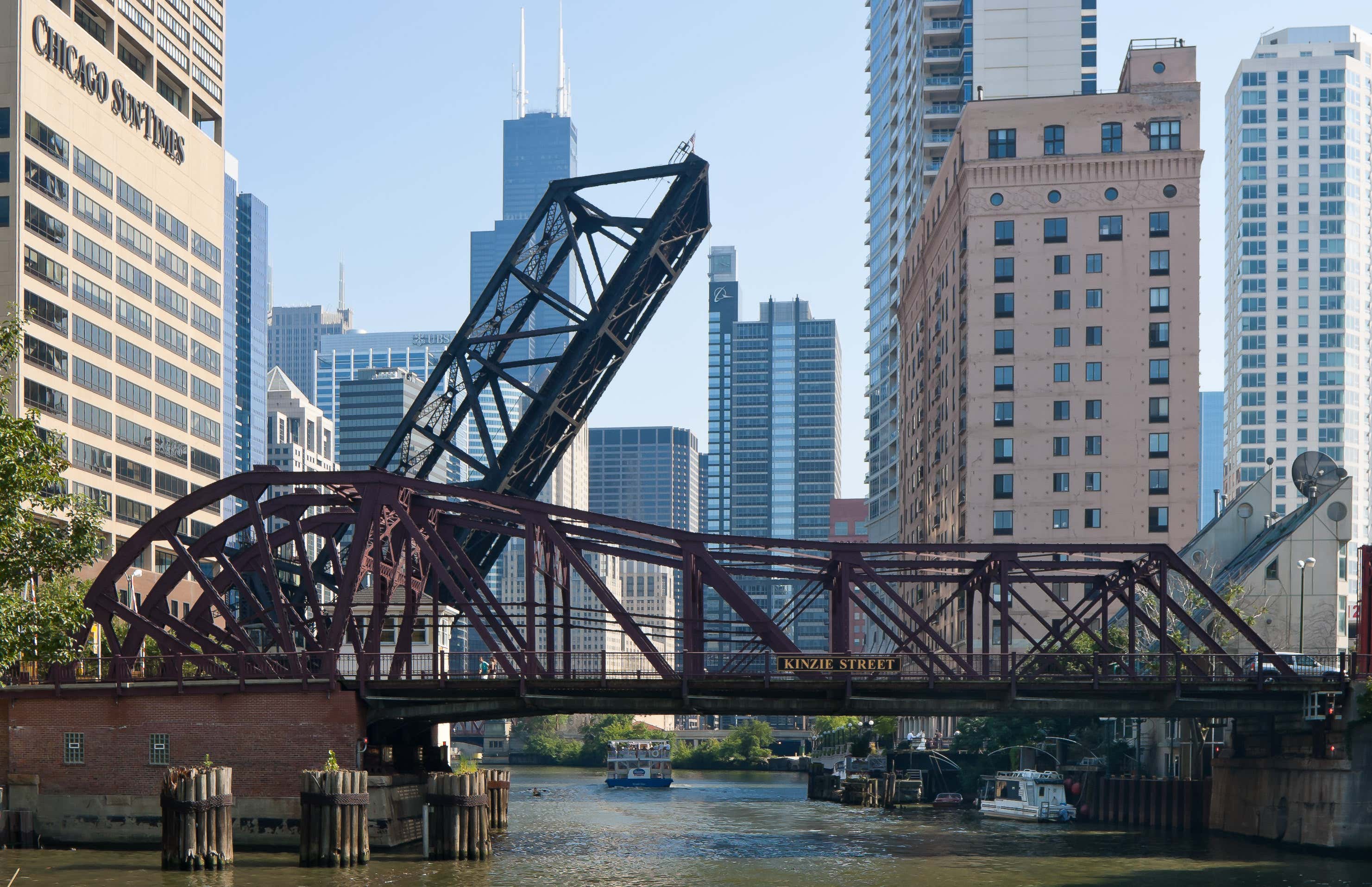 To the unfamiliar, the Chicago River is a major focal point of the city and one of the reason's it was founded in the first place.

During the last ice age, the area that became Chicago was covered by Lake Chicago, which drained south into the Mississippi Valley. As the ice and water retreated, a short 12-to-14-foot (3.7 to 4.3 m) ridge was exposed about a mile inland, which generally separated the Great Lakes' watershed from the Mississippi Valley, except in times of heavy precipitation or when winter ice flows prevented drainage.

Our beautiful city's founder, African-Frenchman Jonathan Baptiste Point du Sable settled along the northern bank of the Chicago River near what is now the south bank of Michigan Ave and Wacker Drive in 1779. 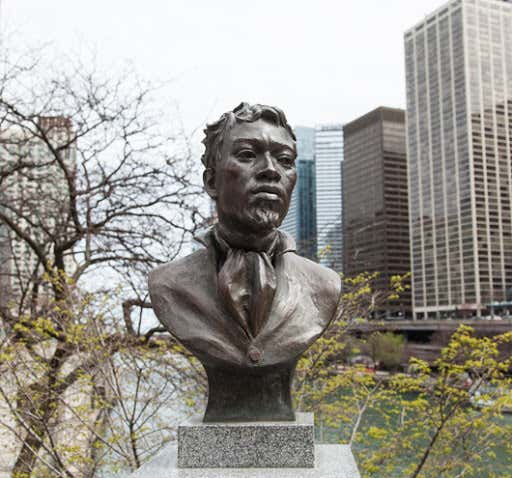 He met a native American woman whom he married and had two children with. They developed a prosperous trading post and farm. His cabin is often depicted as a modest structure, but written descriptions of the property suggest that DuSable may have lived more than a modest life.

The river provided food, water, shelter, and access to the Great Lakes regions to the north and south, and enticed other settlers to want to set up shop.

Through the Chicago River you can access the Great Lakes and thus the Atlantic Ocean via the Hudson, as well as the Gulf of Mexico via the Mississippi River.

The North Branch of the river was originally named the "Guarie River", or "Gary's River", after a trader who may have settled the west bank of the river a short distance north of Wolf Point, at what is now Fulton Street (right by where Dave took the plunge).

Back before the river was heavily settled its banks and bottom were incredibly sandy. So much so that canals had to be dug at its mouth to allow ships to pass as they were constantly being stuck on the sandbars.

The river is a marvel of modern engineering. Even by today's standards.

In 1887 the Illinois General Assembly realized the disaster they had on their hands with the amount of pollution being dumped into the river on a daily basis by all the mills, factories, slaughterhouses, and citizens' personal waste and then flowing out to Lake Michigan. The city's drinking water came from the lake so you can imagine how sick people were getting from drinking the water and swimming in it. It was typhoid city.

They managed to reverse the flow of the river by damming it at the mouth of the Lake, and building a series of lock's. Crazy shit. Especially when you take into account they are still being used today.

So yah, the river might be kind of gross today, but it keeps our stunning Lake Michigan a hell of a lot cleaner than it otherwise would be. The only thing keeping it from being truly pristine is that cesspool Gary to our south.

(FUN FACT - did you know that the famous Y looking symbol on all the municipal buildings in the city relates to the Chicago River and its two divided branches? 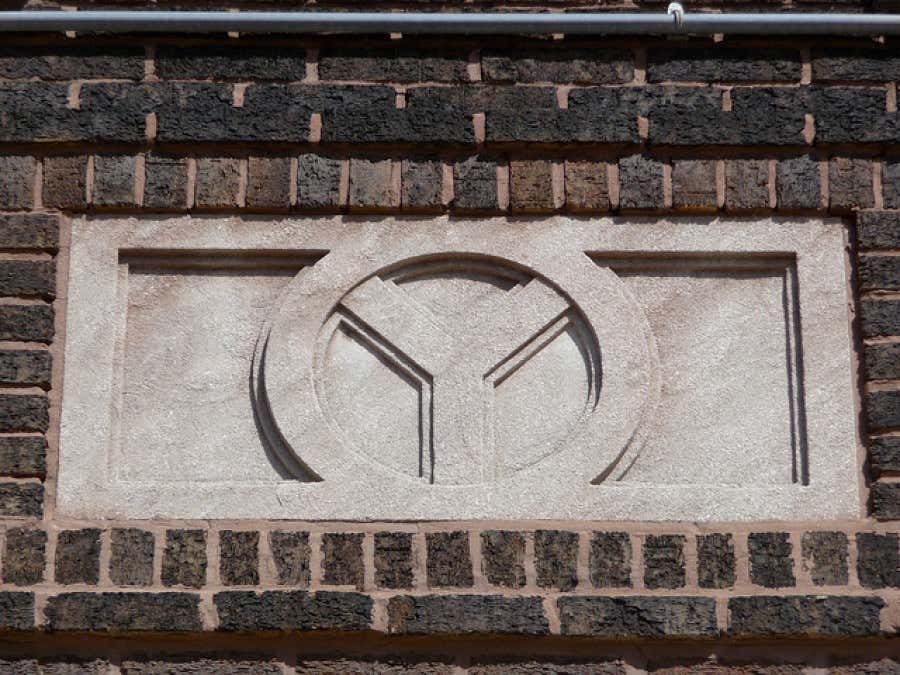 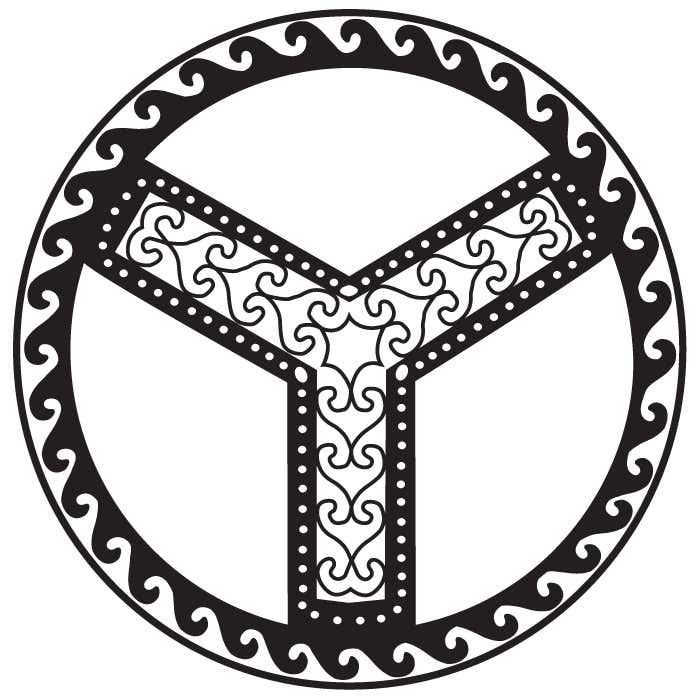 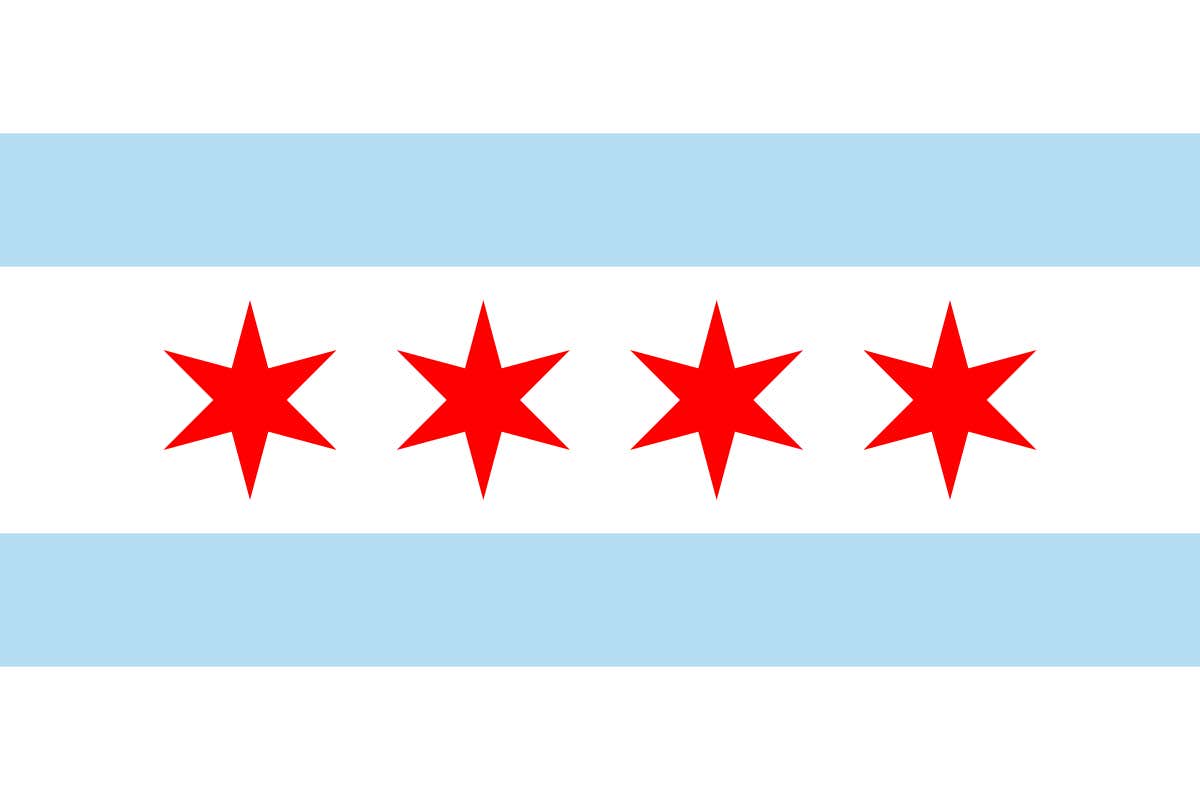 In 1915, the SS Eastland, an excursion boat docked at the Clark Street bridge, rolled over, killing 844 passengers.

In 1992 a flood occurred when a pile driven into the riverbed caused stress fractures in the wall of a long-abandoned tunnel of the Chicago Tunnel Company near the Kinzie Street railroad bridge. Most of the 60-mile network of underground freight railway, which encompasses much of downtown, was eventually flooded, along with the lower levels of buildings it once serviced and attached underground shops and pedestrian ways.

The tradition of dyeing the river green on St. Patrick's Day (still the biggest and best St. Patrick's Day in the country, no offense Boston) actually came about by accident when plumbers used fluorescent dye to trace sources of illegal pollution discharges. The river lit up a neon green and was a hit. So they decided to make it a St. Patrick's Day thing and the rest is history. In true Chicago fashion, the dyeing of the river is still sponsored by the local plumbers union. (Shoutout Local 130!)

Fast forward to 2004. Dave Matthews Band had just finished a string of shows in the Chicagoland. As their buses departed the city a horrific incident took place.

Now if you've been to Chicago, chances are you've seen one of these monstrosity's on the river 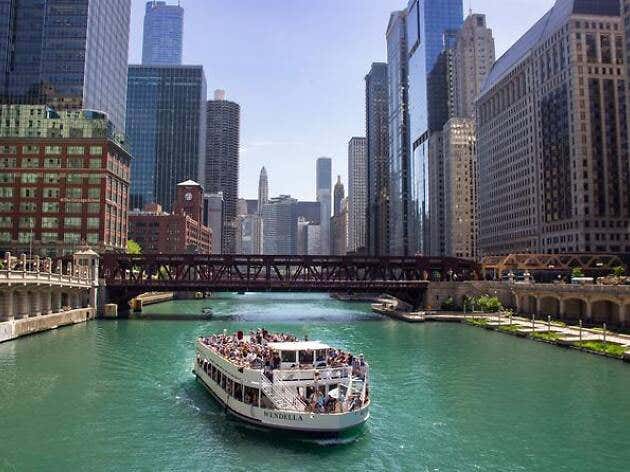 You can't miss them. There's 500 of them at all times up and down the river hogging it up.

If you watched our surfing video you saw one honk at Donny while he was driving our boat like they owned the river. That's these assholes. Their tour guides say the same shit over and over on loud PA's on a nonstop loop. The Catch 22 is that the River Architecture Tour is a must for anybody visiting the city. It's the best way for somebody to see and learn about the city's history and buildings. So as annoying as the tour boats are, they serve a fuckin awesome purpose at the same time.

As they are leaving Chicago to head west, they pass over The Kinzie Street Bridge.

Coincidentally, at that exact moment one of these tour boats is passing underneath.

I'll let the Chicago Tribune take it from here -

At the outset of a Chicago River boat tour Sunday, Capt. Sonja Lund deadpanned that passengers should not look up with their mouths open when passing under the city’s grated bridges, lest they get a true “taste of Chicago.”

About 15 minutes later, passengers got more than that. They got a deluge when the boat was doused with a foul "liquid substance" that appeared to drop from one or two charter buses as the boat passed under the Kinzie Street bridge, passengers and tour officials said.

Witnesses said they had just begun the Chicago Architecture Foundation's 1 p.m. tour when they passed under the bridge and a cascade of a "brownish-yellow" substance rained on them. About two-thirds of the passengers seated on the upper deck of Chicago's Little Lady were soaked. Passengers said they looked up to see at least one, possibly two charter buses rumbling above.

A volunteer tour guide at the boat's helm reassured passengers that they had been splashed with water. But the foul smell prompted suspicion.

There was "stunned silence initially. Then sort of this horrible realization as they began to smell themselves as to what happened," said Steedman Bass, 35, of Boston, who was a passenger on the boat but was not sprayed. "It was horrific."

(that smell is our shit Focker)

Some passengers became sick from the smell and made use of the boat's lower-deck bathrooms, Bass said.

At the dock, the 120 passengers disembarked and were given refunds for the $25 tickets, exchanges or open-ended tickets for later tours. Some were given cab fare to get back to hotels and some passengers' dry-cleaning bills will be paid, foundation officials said. The boat's crew swabbed the deck clean and set off only slightly delayed for the 3 p.m. tour.

A local tour bus company official said he had never heard of a bus unloading liquid waste into the river from a bridge. Charter bus companies typically contract with disposal companies to get rid of their waste or dump it at their own disposal sites, he said.

Passengers said they were shocked at the awful timing of the improbable hit.

“If you tried to orchestrate this, it would be an almost impossible scenario,” Bass said.

What are the odds?

So now you know the reason we picked that spot for WSD to take the plunge.

So you guys bitching that he didn't jump off a bridge into the River can go to hell. Not only is he, and Donny and I, still glowing from spending about 2 hours frolicking in the water like sickos, but Dave essentially bathed in a septic tank. #hero

p.s. - Big shout out to ChicagoSUP for hooking us up with this awesome experience. Donnie, Dave, and I are officially the 2nd, 3rd, and 4th people to ever surf the Chicago River. I posted this blog a few months back, about a guy (who I posited was Ken Griffin) surfing on the River, and the main distributor of North America saw it and reached out to me. They set me up with the ChicagoSUP guys. We lined it up for when Donnie was coming to town and the rest was history. Had no idea it would end up turning out to be as amazing of a day as it did. So again, Thank you to Ian and ChicagoSUP.

p.p.s. - Everybody already knows this but Donnie is one of the coolest fucking guys I have ever met. He isn't one of those people that's one way on the internet and on video and another way in person. Zero ego, super interesting, and overly friendly and polite. I am lobbying hard to get him to move here to Chicago (forever) now that China is shut down. Any help in doing that would be greatly appreciated.

p.p.p.s. - If parts of this blog look familiar to the one Dave posted yesterday it might be because I had this one half finished yesterday before having to drive out to bumfuck Morris to spend 5 hours at the Secretary of State. I wanted to post this as a follow up to Donnie's to end the day but wasn't able to. So it sat in drafts all day. Not saying Dave copied and pasted part of it but not saying he didn't either. Even if he did that's what makes Dave Dave and why I love him so much and hope he never changes.