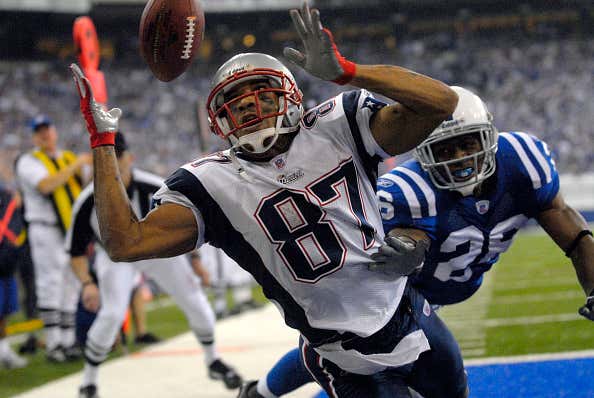 It's been exactly two months since we first got word that Reche Caldwell - the No. 1 wide receiver on the 2006 Patriots team that was a last minute drive away from winning the AFC championship game against a Colts team that rolled over the Bears in the Super Bowl - was shot and killed outside a home in Tampa.

At the time I wrote about it, we knew next to nothing about the crime. Who murdered him. What the motive was. Whether the killers knew him or it was a completely random act. And two months later, it would appear neither do the police. Though Yahoo Sports has fleshed out some of the details in a well researched piece where they spoke to the people closest to Caldwell. And some of what they said is downright surreal.

For instance, Caldwell was FaceTiming with former Chargers teammate Tamarick Vanover at the exact time of the murder. He was carrying a large amount of cash. And his girlfriend went into the house to get her coat, just as he was assaulted. And more. While I'm trying to sound flippant, they're like something out of a true crime documentary.

Vanover, several hours away in Tallahassee, Florida, was one of the last people to see Caldwell alive. The others: the woman Caldwell was dating (Jennifer Graciano) in whose front yard Caldwell was shot; the person (or people) who shot Caldwell; and the paramedics who couldn’t save his life on the way to the hospital.

On that FaceTime call, Vanover said Caldwell was showing him his new office at the home owned by Graciano in Tampa’s Live Oaks Square neighborhood.

After walking outside, Caldwell also showed off his new jewelry and what he and Vanover used to call “honey buns” — their term for hundred-dollar bills.

That’s when everything changed in an instant.

“Then in the next few seconds, that’s when I heard the gunshots,” Vanover said. “I didn’t know what was going on at first. I was just standing there, calling [Caldwell’s name]. …

“Unfortunately, there is no current update that can be released,” Tampa Police Department spokesperson Eddy Durkin told Yahoo Sports in a statement. “Detectives continue to actively work to develop leads in this case and encourage anyone who may have information in relation to his homicide to contact Crimestoppers of Tampa Bay at 800-873-TIPS.” …

Caldwell was helping manage a local performer named Roboy, along with his younger brother Andre — who also played in the NFL — as part of their new record label, DuWell Entertainment. (Andre did not respond to interview requests.)

Graciano and Caldwell had made plans for the night of June 6, one day after bars and clubs reopened at 50 percent capacity in Florida following COVID-19 restrictions. They were going to attend Roboy’s performance at a Carrollwood club, Whiskey North, and then spend the night at a hotel they had booked in Clearwater.

According to Graciano, they took their bags out to the car just before 11 p.m. when it started drizzling. As Graciano ran back inside to grab her jacket, Caldwell and Vanover were chatting via FaceTime.

“As I walked back in my house, all I heard was gunshots,” Graciano said, “and I dropped everything and ran outside. That’s when he was on the ground.” …

Graciano said she didn’t see anyone come or go — it happened that fast. Neither did Vanover. All that either of them saw or heard, they said, were gunshots. Vanover recalled four gunshots; Graciano wasn’t sure how many she heard.

Graciano also isn’t sure how many people were involved in the shooting. Deborah Caldwell believes it was “two or more.” Other family members were reticent to speculate, citing the open investigation.

“The information I gave police — they said my statement was pretty key to their investigation,” Vanover said. “It was more what I didn’t hear. Like, I told them I didn’t hear a car speeding off. None of that. I didn’t hear any shuffling feet, no one running up or anything like that. No one said, ‘Get down’ or ‘Give me your money.’ None of that.”

And all that cash and jewelry Caldwell was flashing in his front yard? Vanover said most, if not all, was still in Caldwell’s pocket when he died. No other family members could confirm that fact, and police have not verified it, either.

Was Caldwell’s killer someone he knew? Graciano isn’t sure — and she feels lucky she also wasn’t a victim. …

Caldwell fell into trouble as he tried to find his way through his post-NFL life. The man who once was Tom Brady’s go-to target in 2006 was first busted for helping organize an underground gambling ring and later was arrested for ordering what he thought was legal MDMA, the bizarre details of which were unfurled in a 2016 ESPN.com feature.

After such a necessarily long excerpt, you're probably not in the mood for more reading, but this is the ESPN feature in question:

And without taking too deep a dive, Caldwell was running a gambling operation. And he noticed everyone on the Miami club circuit was always asking about Molly and where they could score some. So he Googled it. And ordered some. ("Challenged on this, Caldwell says, 'You got your phone on you? Try it. It's easy.' He is, in fact, correct.") A postal inspector detected the shipment, an undercover FBI agent showed up with the delivery, an entire platoon of federal agents jumped out of the bushes, and he was off to the Stony Lonesome.

It's all just so bizarre. And we're left to wonder how anybody just happened upon Caldwell on his front stoop, at the precise moment he was holding $20,000, why he was carrying so many "honey buns" to go to a club the first night Florida reopened. Who in his life, if anyone, knew about it. And most importantly of all, was murdering him the intent all along, or was it just a robbery? And if it was a robbery, why didn't they just take his money and not end a man's life?

Hopefully the police will find out and Caldwell's family and friends will get something approaching justice on this. According to all of them, he came out of jail a man changed for the better. Regardless, he deserved better. And what seemed like a strange case at the time it happened just gets stranger the more we learn about it. RIP to Reche Caldwell.