Wow. So this is really happening, huh? I’d be lying if I said I was confident a few months ago that these games would ever take place… but hot diggity dog am I excited (and thankful) that Europe got their sh^t together enough to make it happen.

Some teams will come in a little rusty, others will come in a lot rusty, but I can’t imagine that mattering too much. These are some of the best teams on planet earth and the new condensed format should make for some high quality soccer and even higher quality drama.

So let’s take a look at what’s on deck this weekend… after, of course, a much-needed dose of a little babymaking music to get you in the mood:

Quick reminder of the results from the first four of the R16 second legs and the schedule for the second bucket of games slated for Friday and Saturday. 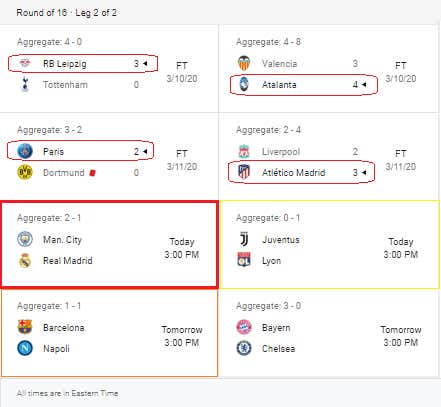 For those wondering, these R18 games are being played in the home stadiums where they were originally scheduled (albeit without fans of course), while the winners will travel to Portugal where the SINGLE ELIMINATION [not the usual home-and-home] quarters, semis and final will take place at neutral venues. Gon be great!

Word of warning: CBS bought the rights to televise the tail end of this season after Turner/BR asked to drop it. The move made sense for CBS since they had already purchased rights starting with the 2021-22 season. Here is what matters though: if you were hoping the new network would be more games on TV you are going to be sorely mistaken. CBS announced plans to televise only TWO of the 10 remaining games this season, which is likely a harbinger of things to come and suggests that you will need to buy their streaming service (CBS All Access) or look into some less legal streaming options, or you could watch on Spanish language channel. Just figured I’d give you a heads up.

Recent form
City: Good when they want to be but switched off a lot more than a typical Pep squad
Madrid: Peaking at the right time thanks to what has emerged as an incredible defense

If this game was being played in March when it was originally scheduled there is no question I would be going with City based both on their form at the time and the added motivation of (seemingly) being banned from Champions League for the next couple seasons. Fast forward a few months and City have lost some mojo while Madrid finished the season looking about as good as they have all season.

Two personnel notes, both of which could prove huge: Sergio Aguero was listed on the team roster and if he is ready to go that’d be a big boost for City and more importantly Madrid will be without Sergio Ramos who was sent off in the first leg. That very well could prove decisive given how well Ramos has played this season, both anchoring Madrid’s defense and scoring a ridiculous number of goals (13 in total, including five since the restart… with a nice boost from penalties, of course).

Should be an awesome game but no Ramos basically seals it for me. Do I like him? Nope. Do I respect the hell out of him. Yep.

Recent form
Juventus: they were rolling but took their foot off the gas after securing the Scudetto
Lyon: only one competitive game since early March… yikes

So first things first: I would just like to state for the record how fcking stupid is it that these two games are being played at the same time on the same day. Europa games were staggered over the course of the day. What is wrong with you Champions League scheduling chucklenuts???

Anyway, this should be a great game as Juventus seek to overcome the 0-1 deficit that Lyon secured in France back in February.

Juve took the last couple weeks of the season off last month – shades of Liverpool coasting down the stretch – but they still have a massive advantage in that France’s traditional capitulation (this time to the Rona) means Lyon’s recent loss to PSG in the French league cup final is the only competitive game they have played in for FIVE months. Tough to shake off that kinda ring rust. I also have a sneaking suspicion that Lyon will fall victim to the old “play not to lose rather than play to win” strategy in this sort of massive game where they come in nursing a tiny lead.

Recent form
Barcelona: this Barça is definitively not those Barças (but they still got Messi)
Napoli: have been fine – not great but far from bad – since the restart

Heading back to the Nou Camp sitting even at 1-1 this feels like precisely the kind of game that Barcelona would ride its experience and Messi to pull out handily. They are, after all, unbeaten in their last 35 UCL games at home. This squad is anything but typical Barcelona, however, as the club has looked painfully ordinary since play resumed a few months ago. Barça have their usual big three (Suarez, Griezmann and Messi) up top but will be without Samuel Umtiti (injury) along with Sergio Busquets and Arturo Vidal (suspension)… suffice to say the Catalans have all sorts of holes at the back.

Both clubs are prone to leak goals so I’m loving the OVER, and I was completely out on Barcelona until they went and did this and pulled on my heartstrings:

Meaning I am now just partially out on Barcelona… but being out is like being pregnant – you can’t be just a little bit.

Long shaping up to be the worst of the remaining R16 games with Bayern up 3-0 heading home… the only question mark is the extended layoff the Germans were hit with as punishment for being the first to get their house in order rona-wise. Will it affect them? Probably, at least a bit. Enough to cough up a 3-0 lead against a Chelsea team with a crap defense and missing their best player?

Nah. Besides, it is a literal impossibility to drop a jersey this ugly and then immediately come up with a historic turn-around victory on the road against perhaps the best team in the world…

So there we have it. I can’t stress enough how awesome these games are shaping up to be (most of them anyway). Champions League will be back with single elimination quarterfinals next week. In the meantime there is a chance I’m going to drop a little out-of-the-ordinary blog that may ruffle some feathers. We’ll see. Anyway, stay safe out there kids!