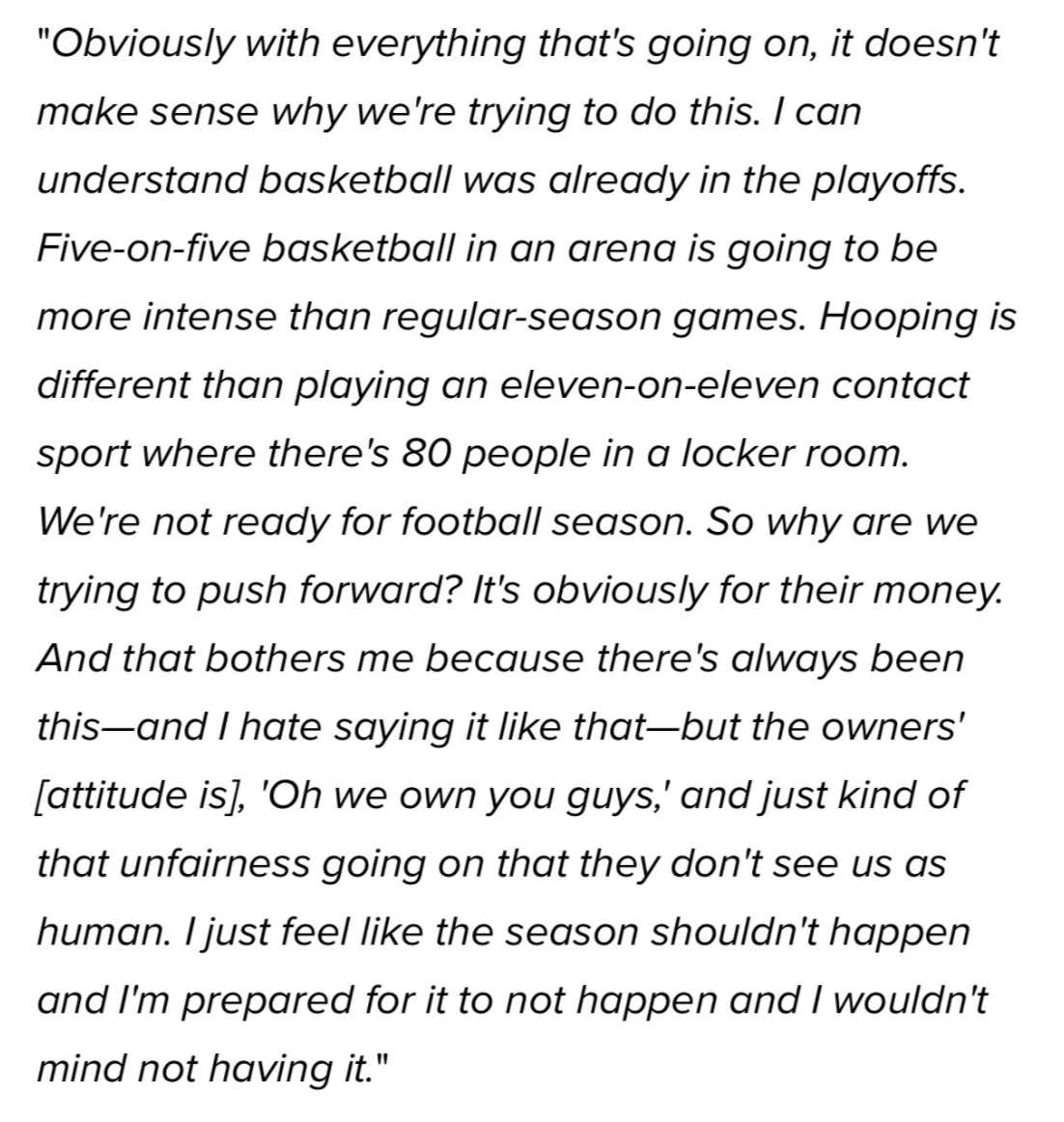 I think this is fascinating for several reasons. For starters, any time you say "hey, maybe it's not safe to play a sport in the middle of a pandemic" you'll get instant blowback from the "it's a hoax, it's not that bad, it's the government trying to control your life" crowd. Those people SUCK. We're still seeing 60,000+ new cases a day and over 1,000 deaths a day, and we've been in lockdown since MARCH. Freakin March, man! We've done a shitty job as a country, from the top down, controlling this. And then we've seen how it has affected the MLB and their attempts to play a season- the outbreak on the Marlins canceling a ton of games, Soto having a false-positive and missing the first week of the season, and Eduardo Rodriguez developing a heart condition from his battle with COVID

ESPN - Boston Red Sox pitcher Eduardo Rodriguez will miss the rest of the season as he recovers from a heart issue, the team announced Saturday.

Rodriguez has been diagnosed with myocarditis, an inflammation of the heart that the team believes is a result of the left-hander's recent bout with the coronavirus. He tested positive for COVID-19 before the start of summer camp. While he was cleared and returned to workouts on July 18, he was shut down a week later after an MRI revealed his ailment.

He is a 27 year old elite athlete, Cy Young contender who now has myocarditis as a result of his bout with coronavirus. We spend so much time talking about the elderly and death rate and ignore the fact perfectly normal people, and top athletes, are going to have life-long health issues as a result of contracting the virus.

So I say all of that to say, how can we blame players for sitting out? A lot of us can do our jobs from home. NFL players can't, and not just that, their jobs require them to go face to face, body on body, spit flying everywhere, with other people. Fucking baseball players couldn't stay out of the bars and casinos for a day, and we expect rosters full of football players to be able to? That's just living in La La Land.

Now, here's the counter-point: OBJ has all the money he'll ever need. So of course he's fine with sitting out. There are tons of NFL players- undrafted free agents, practice squad guys, and the staffs of the team, front office workers, etc who need the season for their paychecks. There are guys who have trained their entire lives to cash 1 single NFL paycheck. To maybe crack the roster and finally get money in their bank accounts. Should Odell be able to speak for those guys? OBJ can sit out and open a spot for them, I'm sure they wouldn't mind that.

But then we can talk about the morality of the entire situation. Is it right for owners to push forward a season, knowing the health risks involved? I don't know…probably not? I mean if you hooked these owners up to a lie detector, none of them pass the question if they would sacrifice the players' health in exchange for more money. Obviously they don't care about the players, we've known that forever. The players know it too, but that sweet paycheck is good enough to keep the game going.

So who knows at this point if we'll get an NFL season. I think we will. Or at least some of one. But I don't think OBJ is wrong for his take either. I think it's way more complicated than a lot of people want to give it credit for. In 2 years or so we'll look back and either be stunned they played, shocked we questioned playing, or right down the middle. As we've learned since March, nobody really has the right answers when we need them. We've been making a lot up as we've gone along. Hopefully they get this one right.