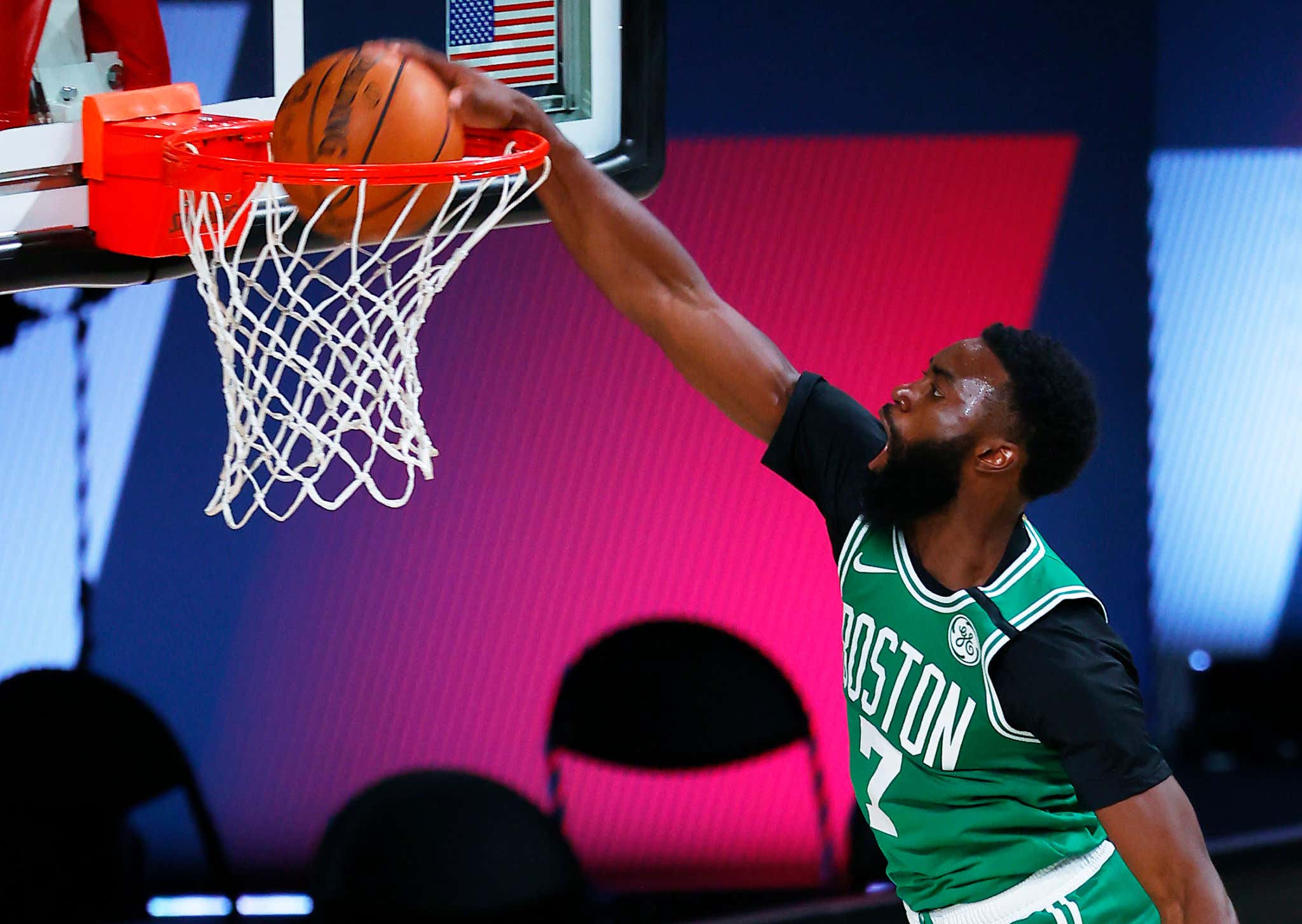 While the Celts may be pretty much locked into the 3 seed, after how the MIL game went this was every bit as important a game for them to win as it was for the Blazers who are fighting like hell to get into the play in game. You combine how Tatum looked in their debut with how they lost, this was a great opportunity for the Celts to bounce back and snag a win against a quality opponent that provides challenges in areas the Celts struggle in. They have a monster post player and elite scoring guards. Those type of players usually give the Celts fits and while that's exactly what happened this team didn't fold. Even as they were blowing their 24 point lead, they didn't pout and quit. They punched back. So not only do I feel better this morning after watching the two Jays dominate yet another opponent, but I'm feeling better and better about the mental toughness that this team is showing. Get down early against MIL? Fight back. Poop your pants and blow a massive lead? Show up and execute in the fourth quarter.

Of course the Celts wouldn't be truly back if they didn't take years off your life and stress you the fuck out over the course of 48 minutes. I forgot how much I missed that pain. To some this performance may raise red flags, but to us? This fanbase that watches this team night in and night out it was basically par for the course. This is how we live and what we are used to and that's never going to change. With that said, let's dive in.

- After what you could argue was the worst performance of his professional career, the Jayson Tatum takes were blazing hot. He's playing too much golf and not practicing! This is what happens when you don't have a hoop at your house in March! It was everywhere you looked. People couldn't help themselves. Instead of realizing that hey, maybe it was just an off night against a historic defense, those were the reasons they pointed to. Well then let me ask you something. Why didn't all the golf impact him yesterday? How was he able to make any shots yesterday if he wasn't taking driveway jumpers in March? Hmmm, weird when you think of it like that huh?

What we got, was February Tatum. The shot making, the defense, and to my pleasant surprise the playmaking was the best we've seen all season long. Tatum carried this team early, was on the money from deep, and looked way more like himself. There was also this

But hey, at least everyone had fun that one day getting their jokes off. Weird I didn't see those same jokes yesterday but that's OK.

- Tatum obviously gets a lot of the publicity, but that's why every opportunity I get I continue to stress that the leap of Jaylen Brown is the most important part of this team's success. Without Jaylen turning into an efficient, consistent, All Star caliber player this team is not where it is right now. He saved the Celts in this game, was their best player in the fourth quarter, and continues to be their best player in the clutch by a wide margin

When Jaylen scores over 25, this team is practically unbeatable. What we saw in this game was the blueprint for how this team can be successful. Just give it to the two Jays and get the hell out of the way. Defensively he was just as nails, holding Dame/CJ to just 3-8 shooting. There's no debate that these two won the duos battle and it will surely not be the last time that happens.

- There are a lot of people that owe Gordon Hayward an apology. In fact, I'm sure some people reading this blog right now spent all year saying he sucks, he should be moved to the bench, blah blah blah. Hey idiots, do you not realize that a healthy Hayward is the perfect player for this system? I tried to tell you, Orlando Hayward was going to be an absolute beast and look what's happening

This is what makes the Celts dangerous. Their wings are truly a pick your poison dilemma. They can play through multiple players and attack you in a variety of different ways. I also love how money Hayward is from the FT line in fourth quarters. The best part? He did all this with only 10 FGA! He in no way is taking away from the Jays, in fact I would argue that him being on the floor is what is allowing them to flourish.

There are times where Gordon frustrates even me. He's passive, he's turnover prone, shit like that. But I always said Gordon Hayward is going to determine the Celts ceiling and if this is the version we get, the ceiling is the roof.

- Kemba looks so fantastic I cannot even stand it

I know the minutes restriction is killing him but he looks so damn good right now this team needs to stick to the plan. He's making everything, his burst is perfect, his defense is good, his smile is infectious, this is the All Star Kemba this team needs. Didn't matter if it was against MIL who has a great defense or POR who kinda stinks on that end, Kemba is Kemba again and I could not be more thankful.

- Shoutout Enes Kanter for coming right in and filling his role. A nice 11/8 in his 19 minutes, I didn't even think his defense was all that bad. I was terrified that Dame would just put him in P&R and that would be a disaster, but he had some key defensive plays late that were certainly a surprise.

- This time will probably never shoot 54/60% with 18 3PM again so enjoy this while you can. Tomorrow they very well may come crashing back down to earth so be prepared for that. I knew things were going to be weird when they scored 37 points in the first on 60/63% shooting. That's not the Celtics I know and love.

- Deuce is so goddamn cool

- Only Marcus Smart could go 0-4 (0-2) but due to his 5 rebounds, 4 assists, 3 steals, and 2 blocks do I feel like he played a perfect game. It's weird, it doesn't make sense, but at the same time it makes all the sense. Some might call that impacting winning.

- I really was impressed with how the Celts defense came out to start this game. We've seen them be slow on that end, but they were locked into Dame/CJ pretty much from the start. It didn't last a full 48, but that first half defense was what I want to see moving forward.

- Despite the win, we can't just ignore their flaws. For example, we just have to accept that if a team as a monster big man, that big man is going to do whatever the fuck he wants against this frontcourt. Nurkic finished with 30/9/5 on 12-20, he was 6-11 against Theis and 4-6 against Kanter. That's just a reality this team is going to have to adjust to. Maybe you let the big man score whatever and then shut down everyone else. Either way, their interior post defense is getting shredded and that's not changing anytime soon.

OK maybe I lied. There was also this

That was bad. Especially in a 3 point game coming out of a timeout. Why is inbounding the ball so goddamn hard for this team?

- As good as the first half defense may have been, the second half defense might have been the worst we've seen from this team all season. I'm talking 76 points on 61/56% shooting. You cannot have that type of defensive lapse if you want to go deep in the playoffs. Back to back 38 point quarters? Gross. Have some pride on the defensive end for me one time.

- You may not think it's a big deal, but here we had another game where the Celts left far too many points on the board from the FT line. I love that they are getting there so much more than before the hiatus, but shit man, make your goddamn FTs. After missing 7 against the Bucks they went 26-34 in this game. You're playing with fire when your good FT shooters are missing FTs. Clean it up.

- This was a foul on Daniel Theis

You combine that with the iffy backcourt call and it's starting to get really annoying how the Celts are getting boned like this late in games. Back to back screw jobs is not the best look. But then again this is why I hated calling out the refs publicly, you're just asking for the Basketball Gods to do this shit to you. I can't wait until today's L2M where they try to explain these away!

- Alright, let's talk about the blown 24 point lead. I'd say I was surprised but ya know, I watch this team every night. If you seriously thought they weren't going to blow that lead I'm not sure what team you've been watching during the Brad Stevens era. Nobody hates easy 20 point wins like the Boston Celtics. Why do that when you could instead blow the lead and cause your entire fanbase to pull their hair out in frustration?

It was the same old formula. They decided to not play defense, their offense went to more isolation instead of moving the ball, they were sloppy, just everything you don't want to see at this point in the season. I want to see them step on throats and never let up. Not build a lead, feel comfortable, relax, and then the next thing you know you're down 3 late in the fourth.

- Which brings me to Brad. Listen, I love Brad like my own father, but I'm really starting to wonder if he knows the timeout rules. I hear people try to explain his lack of timeouts as an effort to allow the players to play through their struggles. Well, how about we take that right away from them because they clearly can't do it. Brad took a timeout up 18 with 7:43 left in the third quarter. He didn't take another timeout until 10:29 in the fourth, up 1. I'm sorry, but there is no excuse for that. We don't need to see teams go on massive runs and call timeouts when it's too late. How about ya know, break up the run, refocus your team and maybe you don't blow that lead?

This isn't a random occurrence, this is a trend. It's a problem. Every single game we get a massive run like this that Brad refuses to break up. I'm not totally sure this team knows how to close games yet, and that falls on the coach in my opinion. I NEED Brad to be better with this once the playoffs start. Please.

If you think things are getting any easier, MIA is on the schedule tomorrow and they look great in the bubble. They are chasing the Celts for that 3 seed so I'd say that's a pretty important game. Sounds like Jimmy Butler will play, and I'm going to need their 3P defense to be much better than it was against POR or the Heat are going to light this team up. But for now, they secured their first win of the restart and thankfully looked a whole lot more like themselves, even if that included blowing leads.